South Korea vs. Algeria, 2014 World Cup preview: Who will take the initiative?

South Korea and Algeria played reactively in their opening World Cup games. With both needing the win from their meeting on Sunday, someone will surely seize the initiative.

Share All sharing options for: South Korea vs. Algeria, 2014 World Cup preview: Who will take the initiative?

South Korea kicked off their World Cup campaign with a nervy 1-1 draw with Russia, while Algeria succumbed to a devastating 2-1 defeat to Belgium after taking the lead in the first half. Both performances were notably cagey, with the two teams more concerned about avoiding defeat than chasing the victory themselves. However, with these teams knowing that they really need a win in their next match, hopefully their clash on Sunday will be a little more interesting.

However, you probably shouldn't bet on it. Algeria are a talented team -- perhaps the most underrated in the entire tournament, though coach Vahid Halilhodžić has built them on a solid counter-attacking base with their three midfielders sitting deep and shielding their defence. They'll probably be quite happy to let South Korea take control, though Hong Myung-bo's side could struggle to break Les Fennecs down.

Belgium came from behind for 2-1 win

Belgium came from behind to beat a stubborn Algeria 2-1 in their World Cup opener.

Belgium came from behind for 2-1 win

It could well be that both of these sides start unchanged lineups from their opening games. Algeria do have a host of talented attackers to choose from, though they played pretty well on the counter-attack in their opening match and the pace of El Arbi Hillel Soudani could keep the the in-form Islam Slimani and Nabil Ghilas out of the 11.

Meanwhile, if South Korea are to make a change, it'll probably be up front. Lee Keun-Ho came off the bench to net their goal against Russia in the opening game, and he could well replace Arsenal's Park Chu-Young as their lone centre-forward. 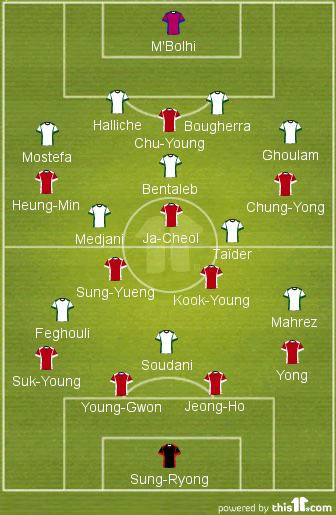 Son Heung-Min vs. Algeria's defence - South Korea have a couple of pretty good players, though the team's undoubted star is Son Heung-Min, who was one of the revelations in the Bundesliga at Bayer Leverkusen this season. He starts out on the left of an attacking trident for both club and country, and excels at making darting runs inside. His invention could well be the key for South Korea to unlock Algeria's disciplined defence, and keeping him quiet will a priority for Les Fennecs.

Goalkeeper errors the story in draw against Russia

It was not a good day for the goalkeepers. Errors from both teams' net minders led to late goals.

Goalkeeper errors the story in draw against Russia

Algeria's counter-attacking pace vs. South Korea's defence - Algeria defended excellently against Belgium, and yet failed to create many chances from open play -- despite being best-stocked in the attacking department. They may well have more luck against a shakier defence, with their pace and width on the counter-attack having the potential to cause big problems.

Riyad Mahrez is a pure, quick winger down the left, while Sofiane Feghouli will look to drift in from the right and prise the Korean defence open with intelligent movement and invention. If these players are on form, and Algeria's midfielders are able to give them good service, they should be able to cause their opponents problems.

Both of these sides excel on the counter-attack, and have a few players capable of doing real damage on the break. However, Algeria looked highly impressive in almost shutting out Belgium in their opening group game, and they could just snatch it. Either way, it will be tight, and we probably won't see many goals. 1-0 Algeria.