The Netherlands and Chile have produced the two best performances we've seen at the World Cup so far, and meet to determine the Group B winner on Monday.

Chile have almost certainly been the most impressive team at the World Cup so far, living up to pre-tournament expectations of exciting, attacking football and eliminating Spain in the process. However, the Netherlands certainly haven't been slouches either, blowing the defending champions away, 5-1, in their match. These sides sit joint-top of Group B heading into their meeting on Monday, with the top group spot still to play for.

If this game ends in a draw, the Netherlands will top the group by virtue of goal difference. That means we should expect Chile to throw what little caution they have to the wind, as they'd progress in second place even with a defeat. They really do have nothing to lose. The winner of Group B will avoid having to play the winner of Group A in the Round of 16, and given that will likely be hosts Brazil, it's a significant prize.

Learn some fun facts about every country

The world is a strange place!

Learn some fun facts about every country

The Netherlands will likely be without centre-back Bruno Martins Indi, who has been suffering from post-concussion symptoms since being withdrawn in their 3-2 win over Australia. If coach Louis van Gaal elects to stick with three centre-backs, Joel Veltman or Terence Kongolo would replace him, though it's looking increasingly like he'll switch to a 4-3-3 for this match. With striker Robin van Persie suspended, it may well be Klaas-Jan Huntelaar who's flanked by Memphis Depay and Arjen Robben.

Chile also have an injury concern ahead of the game, with wing-back Mauricio Isla struggling with a hamstring problem. However, a scan revealed no significant injury, so he could still be fit to play. As with the Dutch, there are questions over whether coach Jorge Sampaoli will start with a back three or four, with the former having been preferred in the convincing victory over Spain, and the latter in the rather less-convincing win against Australia. 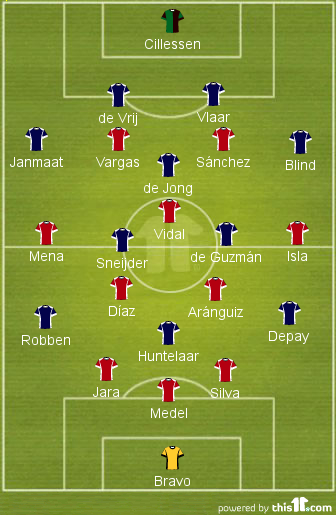 Pressing and positional discipline - Both the Netherlands and Chile have placed a heavy emphasis on high pressing and swift counter-attacks in their other group games, and to devastating effect. Playing in such a manner requires perfect team cohesion and positional discipline, as otherwise the pressing can leave gaps that can be exploited on the break. With both sides having devastatingly quick attackers, it'll likely be in the pressing and transition that this game is won and lost.

How to watch the World Cup while at work

The World Cup is on but you're stuck at work. Stop acting like you're working and watch the World Cup at work.

How to watch the World Cup while at work

Netherlands' wingers vs. Chile's wing-backs - If the Netherlands do elect to play a back four, they'll have the advantage of being able to outnumber Chile's wing-backs out wide, allowing their fullbacks, Daryl Janmaat and Daley Blind, to cover defensively while Memphis Depay and Arjen Robben can look for space to attack in behind. If the Dutch win the wide battle, they could cause big problems.

Alexis Sánchez vs. Daley Blind - Sánchez is enjoying a terrific World Cup for Chile, with his outstanding close control and direct running having caused nightmares for both Australia and Spain. Though he's a nominal striker in Chile's 3-4-1-2, he can often can be found drifting into space out on the right flank, looking to isolate the opposition fullback and deliver a cross or take a shot on goal. Dutch left-back Daley Blind will have to watch him carefully to limit the damage.

This is the most unpredictable game of an even more unpredictable World Cup. Both of these sides have looked excellent so far, excelling with specialized high-pressing, counter-attacking strategies, so trying to separate them is nigh-on impossible. But purely because Chile have nothing to lose, and will thus likely be more cavalier with their approach, I think the Dutch could counter their way to a tight win. 3-2 Netherlands.