Croatia vs. Mexico, 2014 World Cup preview: Who will progress to the knockouts?

Croatia and Mexico do battle over a place in the World Cup knockout stages on Monday.

Share All sharing options for: Croatia vs. Mexico, 2014 World Cup preview: Who will progress to the knockouts?

Brazil certainly haven't been impressive at the World Cup so far, but they've emerged from their first two group games in pole position to progress into the knockout stages. They face a very poor Cameroon side in their last match and will likely record their second win of the tournament to guarantee their qualification. That leaves Croatia's clash with Mexico a straight fight over the second progression spot.

Heading in, it's Mexico with the edge. Their goalless draw with Brazil has ensured they're a point ahead of Croatia and means a draw would be enough for them to qualify. Croatia, meanwhile, lost their opening game to the Seleção, and so need to beat El Tri if they want to progress beyond the group stages for the first time since they finished third in their maiden World Cup in 1998.

Brazil haven't played up to their hype, but there may be something special 'Memo' Ochoa and Mexico, as well.

Happily neither coach is believed to have any injury concerns, meaning both sides should be able to field their strongest starting lineups. That could well mean we see two unchanged teams, with Croatia boss Niko Kovač rewarded for his selection tweaks ahead of their game against Cameroon with a 4-0 win, and Mexico's Miguel Herrera having named the same lineup in both of their matches with good results. 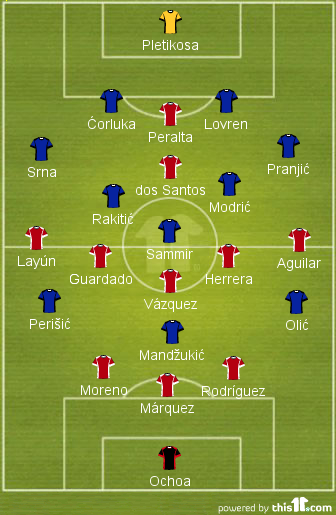 The wide battle - Mexico's wing-backs have performed excellently in the World Cup so far, pinning back Cameroon's wingers before managing to successfully keep Brazil's quiet. They'll have to do the same again if they want to have success against Croatia, not least with Ivica Olić and Ivan Perišić looking to add width on the counter for Kovač's side.

Giovani dos Santos vs. the Croatian midfield pivot - Kovač looks set to continue using an exciting midfield pivot of playmakers Luka Modrić and Ivan Rakitić, who are both world class on the ball but rather less so off it. However, they'll have to work together to keep Mexico's second striker Giovani dos Santos quiet in this match, or the attacker could delight in pockets of space between the lines.

Guillermo Ochoa vs. Croatian shots - It's no exaggeration to say Guillermo Ochoa won Mexico their crucial point against Brazil. The 28-year-old goalkeeper made a string of extraordinary reflex saves to keep the hosts at bay, and may well have earned himself a big transfer after the World Cup with his contract with Ajaccio having recently expired. He shouldn't be quite as busy against Croatia, though if he's as invincible when called upon, Mexico will be on their way to the knockouts.

On paper, Croatia look the better of these two teams. They have two or three top-tier players in Rakitić, Modrić and Mario Mandžukić, while Mexico have no stars of a comparable quality. However, Mexico's organisation and cohesion have been excellent so far this tournament, despite the turmoil they had with numerous coaching changes heading into the tournament. They are more than capable of picking up the requisite draw to progress. 1-1.