Share All sharing options for: Here's what the rest of the world thinks about American soccer fans

1. They need more than one chant. "USA! USA! USA!" is pretty solid (and, when set against another three-syllable team like Por-Tu-Gal, leads to some decent back and forth), but there are times when it doesn't do the job. Something sad, for when the late equaliser goes in. Something funny, for when Ronaldo's pouting. Something with Wondolowski in it, because that's a fun name.

At the World Cup

When the U.S. beat Ghana

What the scene was like in the stadium when the United States pulled off a thrilling victory over Ghana to open group play.

USA-Portugal was an amazing, unhappy time

Manaus was dour after Portugal snatched away an almost-certain United States victory in the closing seconds of Sunday's match.

At the World Cup

When the U.S. beat Ghana USA-Portugal was an amazing, unhappy time

2. Americans are really, really good at this. That's the general consensus from every non-American whose opinion was canvassed in the course of the evening. Not the football itself, though they're not bad at that. But at the going to the football. There still exists, for reasons that aren't immediately obvious but probably have as much to do with lazy thinking and click-hungry editing as with actual views, a proud tradition of US-based writers producing opinion pieces which make clear (a) why Americans could never love soccer unless (b) certain things are changed and (c) they become the best in the world at it. Which is obvious toss from every perspective, but is particularly obvious toss from near-midnight in a Brazilian square, in 3,000 percent humidity, still pocked with giddy Americans, sweating Brahma, trying their best to look like samba is something that comes naturally to them. And that's after they've been mugged in the last minute. If they'd won, Manaus would have just given up and slumped back into the jungle.

3. The language is charmingly un-football. There is a second, slightly less voluble but perhaps slightly more pernicious strain of thinking on American soccer, which is that the fans should modify their language to better reflect the game they're adopting. That they should, per Europe/England/proper football countries, abandon "field" in favour of "pitch", retire "soccer" for "football", switch out "cleats" for "studs", depluralise "offsides", and so on and so forth. Which is, again, obvious toss. Not only is "cleats" a really fun word to say -- go on, try it. Loud and proud. "Cleats!" -- but one of the great joys of football as a truly international sport is the way the language shifts across borders and, in doing so, alters the conception of the sport, in minor but important ways. Idioms spring from affection. If Americans sound like Americans -- and oh my, do they sound like Americans -- then that's good.

... an astronaut; a full Uncle Sam suit missing only the shirt; hundreds of presumably accidental French flag facepaintings; a DONOVAN 10 shirt with the name crossed out and DISKERUD written above; a cardboard cutout of Landon Donovan that seems weirdly to move under its own power ... 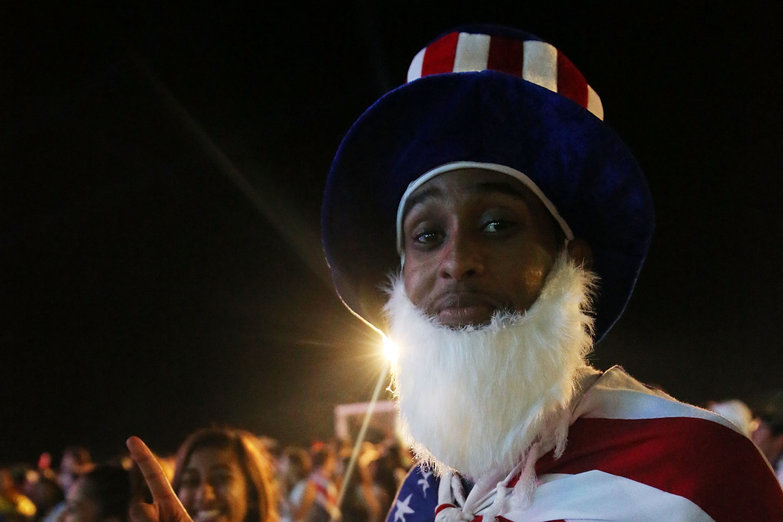 4. Theory the first. (From an English woman.) Well, they only get to be properly patriotic about sport when it comes to the World Cup and the Olympics, and nobody cares about most of the Olympic sports for the rest of the year. Baseball, basketball, the other football; they get to shout at each other a lot, but not at the rest of the world. Maybe hockey. Or is that Canada? Ah, fuck off Nani.

A fair punch in the gut

Nothing makes sense, the World Cup is soul-crushing, and it's easy to forget that the United States are still very, very alive.

A fair punch in the gut

5. Theory (sort of) the second. (From an English man.) I can't get over how uncool they are. Look, that man's got a Captain America shield. Those two have just high-fived. That one's actually wearing a shirt that says "FREEDOM." And they don't care. Which is really ... cool, I suppose.

... and, finally, shouts to the man whose stars-and-stripes sunglasses came with the added bonus of a small, white, plastic Hulk Hogan moustache, attached by two short links of chain. Strong look.

6. Why is anybody here? To have fun. Is anybody having more fun than the Americans? Only maybe the Chileans, and they've won both of their games and dethroned the reigning champions. And nothing much else really matters.