Share All sharing options for: USA and Portugal played an amazing match in the jungle and everyone left unhappy

MANAUS, Brazil -- After 90 thrilling minutes, there was nothing left but shock, confusion and depression.

The final whistle at Arena Amazonia brought cheers from only the Brazilian locals. Everyone else shuffled out in silence, a stark departure from the singing and chanting that served as the soundtrack for the previous two hours. The only words were hushed, whispered under ragged breath.

The U.S. had been 30 seconds away from a guaranteed spot in the knockout stages, but at full time they were left to wonder if they had blown their big chance. Portugal, meanwhile needed a win, and the 2-2 draw has them in need of a final day miracle. It was a result neither team was happy with, and it showed on the faces of both sets of fans.

This bizarre and eerie scene came in Manaus, a city in the middle of the Amazon unlike any other World Cup host. It was a day of utter strangeness, and Manaus was the perfect setting.

Manaus is a large enough city, with a population over two million, but it's dwarfed by the Amazon and the surrounding rainforest. When you fly in, the surroundings make the city look like a town of 10,000, an insignificant scratch of civilization in the midst of the jungle.

For miles and miles around, there is little but green. The river, cutting an impossibly wide swathe through the forest, is the only other feature, but it's enough to take your breath away. The Amazon is so enormous that you end up wondering if you can even see the other side from its banks -- you can't. And then Manaus appears, huddled against the terrain, humbled by the grandeur of its environs. Buildings seem to pop up out of nowhere, looking nothing like a city. Acres and acres of dense trees separate signs of civilization. 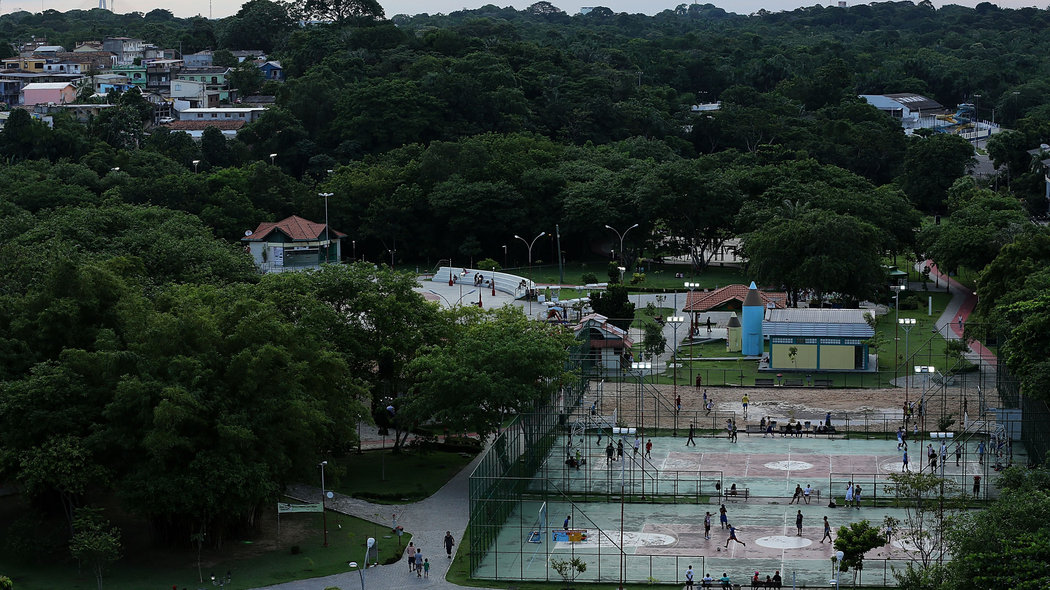 It takes 11 seconds between the plane dropping below the level of the canopy and touching the ground. And even after landing, there's nothing normal about the place: Manaus' airport is home to at least a dozen retired planes, left to sit out in the open as they rust and fall to pieces. Even in the airport, you can't escape the feeling that man has reached too far into nature's domain.

If Jurassic Park were real, it would be set in Manaus.

The U.S. fans congregated in the center of this jungle city hours before kickoff. They gathered a mile from the stadium, and bought beer after beer from street vendors, of which there were many. Every 10 steps brought with them yet another man selling beer out of a cooler; by the time three-quarters of the American fans had passed, they were all sold out. All that was left were discarded cans and booming chants of "U-S-A!"

It took more than 30 minutes for the U.S. fans to make the walk to the stadium. The horde moved at a snail's pace, in part because of the traffic, in part because half the crowd was drunk and in part because every block brought another person in a Cristiano Ronaldo jersey who required booing.

Rising from the middle of the jungle, surrounded by decrepit buildings and undermaintained streets, was the stadium. Gorgeous, glowing and reminiscent of a fruit basket, it stood out in the middle of the bleak grey city and verdant rainforest.

Before long, the Arena Amazonia was awash in red, white and blue. Getting to the stadium requires taking a ramp that rises 30 feet and within minutes, it was choked full of American fans. The sea of stars and stripes didn't abate for more than an hour. The Americans kept pouring in, filling the air with song punctuated only by massed chants of "Ronaldo sucks."

The Americans kept pouring in, filling the air with song punctuated only by massed chants of "Ronaldo sucks."

The Brazilians adore Portugal, and they especially adore Cristiano Ronaldo, which was the only reason the Portuguese had any fan support to speak of. The locals took to counterchanting whenever the Americans disparaged Ronaldo, leaving the stadium concourse echoing with belligerent noise before the game.

The only neutrals left were the bugs, of which there were many. Mosquitos the size of American moths and moths the size of giant butterflies flooded the stadium. It was abundantly clear why the smell and taste of DEET in the building was so strong it could suffocate you. That is if the humidity didn't get the job done first.

Whenever the setting began to feel anything like a World Cup match -- be it the songs, the warmups or the highlights on the big screens -- there was a reminder that this wasn't remotely normal. Giant bugs, the oppressive humidity or scantily clad men and women, wearing nothing but flowers and leaves, served to ensure that this was an entirely unique experience.

The national anthems brought the attention back to the World Cup. The American fans belted out the Star-Spangled Banner, creating an echo in the stadium as flags waved from every corner. The Americans' overwhelming majority in the stands was clear a minute later when the Portugal anthem played to near silence. 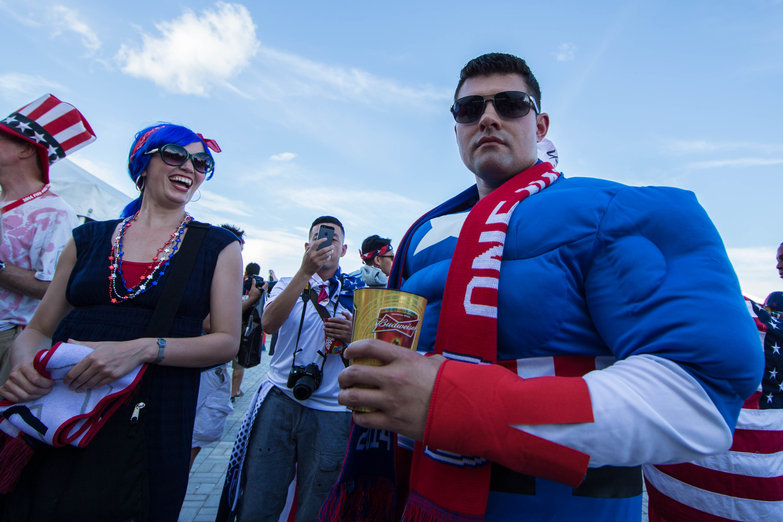 Kickoff brought noise back to the stadiums, and the bugs. The start of the match served as notice to the moths, who proceeded to invade the stands.

The moths didn't seem to have much affect on the locals, who cheered wildly with every Ronaldo touch. The screams were so loud that it was reminiscent of teenagers at a boyband concert, and that attracted the ire of the Americans. By Ronaldo's sixth touch, the boos were as loud as the cheers.

The U.S. fans weren't the least bit surprised when Geoff Cameron handed Portugal an early goal. The defense was always going to be the weak point and the general feeling was summed up by one fan's muttering, "well, fuck."

Luckily for the American crew, the U.S. played their way back into the match. The roars from the red, white and blue got louder as Clint Dempsey came close, then louder still when he did so again. By the half-hour mark, the crowd was back in full voice with "I believe that we will win".

Even as the match went to halftime with the U.S. still down, spirits were high.

"We're getting two goals," one fan said. "We just need to keep them at one."

That looked prescient when Jermaine Jones' incredible equalizer sent the Americans into raptures. There wasn't a dry fan in the building after the ball hit the back of the net and beer went flying into the air. The supporters were soaked, not that they noticed mid-hug. Fans flew down dozens of seats to find their friends, embracing and kissing under beer showers. Chants of "U-S-A!" broke out and, in the stands, a win felt inevitable.

For all the change Jurgen Klinsmann has brought the U.S., fitness, persistence and spirit are what the Americans do. They had a goal, and another was surely coming.

Even as fans became drenched in sweat, the product of a stadium that acted like a sauna, it was viewed as a positive.

"They'll wear down before we do" was a common refrain.

The boos for Ronaldo got louder, the songs more festive and now fans jumped up and down with every chant.

It was only a matter of time. 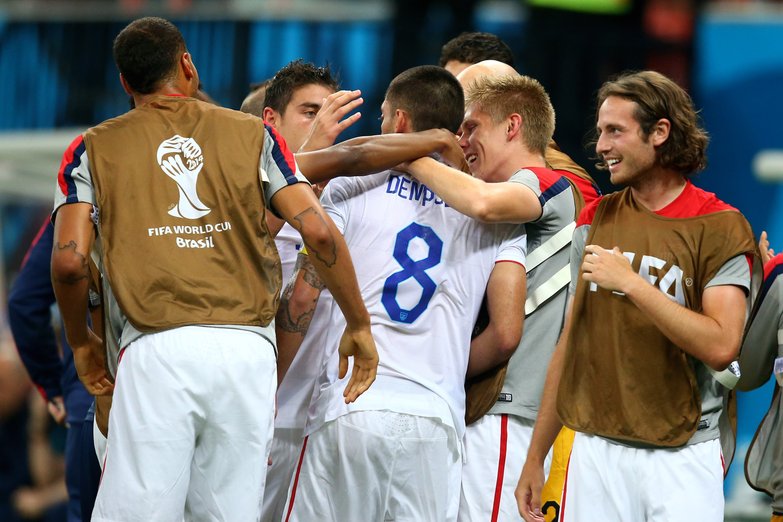 When Dempsey found the net, right in front of the bulk of the U.S. fans to boot, it was like John Brooks' winner against Ghana all over again. Another beer shower, hugs and tears filled the stands. One supporter tried to storm the field, albeit unsuccessfully, and others just laughed, unable to comprehend what they had seen.

The U.S. was minutes from a win, from six points in the group and from clinching a spot in the knockout stages with a match to spare.

Nobody cared that they were soaked in beer, or that it made for an awful smell combined with sweat and DEET. It was a party waiting to happen.

Every minute that passed was a win. Every clearance was met with celebratory screams. Every run to the corner flag was as good as one at goal.

Five minutes of stoppage time was all that separated the U.S. from the round of 16. Cheers.

Then it was four. The cheers got louder.

With three minutes left, "I believe that we will win" was deafening.

By the two minute mark, it was a roar.

As the match entered the final minute, the fans were delirious. They chanted "another win in Brazil" and "na na na na, hey, hey, goodbye."

Michael Bradley had the ball at his feet with the option to pass back to Matt Besler or boot it to the corner, both of which would have probably killed off the match. Instead, he had it taken off him and the American fans went quiet. As the ball was played wide, screams of desperation rose. By the time Ronaldo's cross was met by Silvestre Varela's diving header, the Americans had nothing left.

The Brazilians yelled and cheered, while the Americans slumped to their seats. One laid down in a puddle of beer. Another cried, very different tears than the ones Dempsey inspired.

The referee blew the final whistle and the Americans were still silent. Somehow, this time they were the team that shut off late. They were out-run. They watched Portugal beat them -- at least that's what it felt like -- with the game's final kick.

And the U.S. knew their chance was gone. 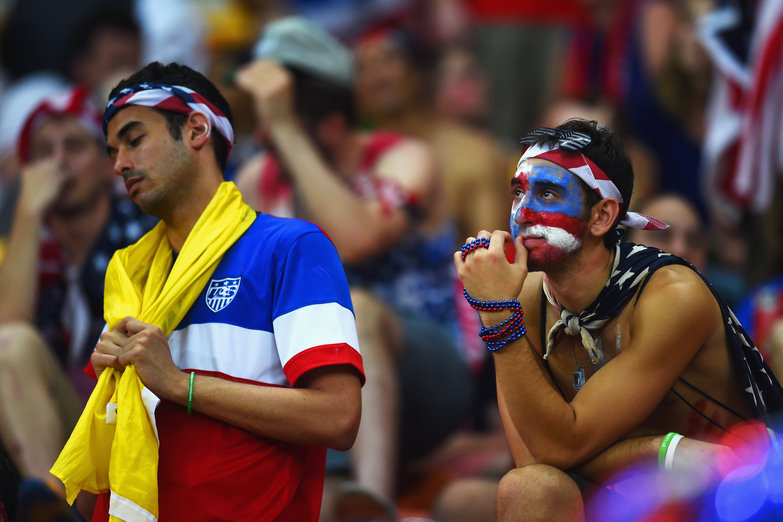 "The gods handed it to us on a silver platter and said, 'just hang on for 30 seconds' and we couldn't do it," a man said through the tears. "You don't get two chances in the World Cup."

The U.S. had gone from a guaranteed spot the knockout stages to perhaps needing a draw against mighty Germany on the final day to stay alive, all within 30 seconds.

I believe that we will

How the USA can advance

The United States' draw with Portugal means they're not yet mathematically into the knockout stages. Here's how they can make it there.

The odds are in the USA's favor

The U.S. missed an opportunity to secure a spot in the knockout round, but remains a heavy favorite to avoid elimination and advance.

I believe that we will

Portugal weren't any happier: their path to a knockout stage berth is even more byzantine. They need a win, a U.S. or German loss, and to make up (at least) a four goal difference swing on Thursday. They needed a win on Sunday to have a realistic shot, and they couldn't get it.

No one was happy. And that assumes anyone could pull themselves out of the shock to feel anything.

"Thirty seconds from the best party ever," said a man in American flag pants. "Nothing has taken the life out of me like that goal."

The Americans made the one-mile walk back to the city center as slowly as they entered. They walked on sidewalks that could charitably be described as gravel as barbed wire loomed over their heads. They marched, an army in desolate retreat, down streets that smelled of sewage so badly that the stench lingered for blocks.

All of this happened in the middle of the Amazon rainforest, a strange and mysterious place that would be far more than any of these travelers could handle for long. It was a fitting place for a match that broke the souls of nearly everyone that was present for it.