Bosnia and Herzegovina vs. Iran, 2014 World Cup preview: Team Melli in need of a win

Iran need a win against Bosnia and Herzegovina to stand any chance of making the knockout stages.

Share All sharing options for: Bosnia and Herzegovina vs. Iran, 2014 World Cup preview: Team Melli in need of a win

Iran came perilously close of pulling off one of the World Cup's all-time great upsets against Argentina last time out, only to be defeated by a last-gasp wondergoal from Lionel Messi. The defeat leaves them with just one point from their first couple of games, but still in with a slight chance of making the knockout stages. To do so, they need to beat eliminated Bosnia and Herzegovina in their last group match, and hope Argentina beat Nigeria.

Despite needing the three points, don't expect Iran to chase the game against Bosnia. They'll no doubt continue to play in the extremely defensive style that has proven surprisingly sturdy so far in Brazil, looking to soak up the pressure from their more technically gifted opponents before using their pace on the counter-attack to try and score. As ever, it won't be pretty, but could be effective.

A Look at Tiebreakers

How to figure out who needs what to advance

Figuring out which teams will advance out of the group stages can sometimes be confusing. Here's the rules FIFA uses to deal with ties.

A Look at Tiebreakers

How to figure out who needs what to advance

Iran will be hoping that Bosnia coach Safet Sušić elects to give some of his backup players a chance, with the Dragons already mathematically eliminated. However, given that they'll be looking to at least salvage some pride in their first-ever World Cup, that could prove to be wishful thinking for Carlos Queiroz. The Iran coach, meanwhile, is unlikely to make big changes to his starting lineup. 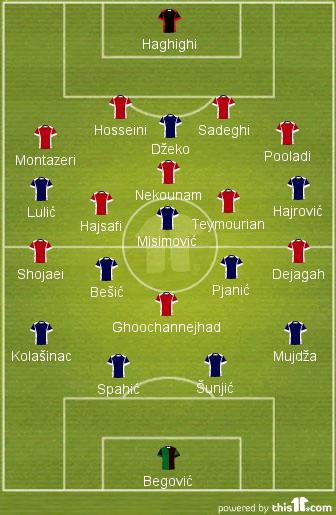 Bosnia's attack vs. Iran's defensive discipline - Iran's play in the defensive phase relies on phenomenal cohesion, energy and discipline, with the team retreating into a deep and incredibly compact 4-1-4-1 shape when they're out of possession. So far, it has proven sturdy enough to repel Nigeria and, incredibly, Argentina, save for the aforementioned wondergoal from Messi every team in the world would have found difficult to prevent. If they're as impressive at the back against Bosnia, they stand a good chance of getting a result.

Want to watch Bosnia and Herzegovina take on Iran streaming live on the internet? We can help you out if you won't be near a TV.

Reza Ghoochannejhad vs. Bosnia's center-backs - Bosnia are talented going forward, but have looked pretty atrocious at the back throughout this tournament. Aging captain Emir Spahić has looked especially vulnerable, and was constantly dragged out of position and beaten for pace and strength by striker Emmanuel Emenike during the Dragons' crunch match against Nigeria. With Iran relying on the talents of the quick Reza Ghoochannejhad to do a lot of their attacking alone, he'll certainly be looking to find some space to isolate the Bosnian defenders one-on-one.

Iran need the win to stand any chance of making the knockout stages, and they'll no doubt give Bosnia a good game with their superb organization. However, they're still pretty unconvincing on the attack, having not scored a single goal in the tournament so far. Don't expect this to be an end-to-end demonstration of attacking football. 0-0.