United States vs. Germany, 2014 World Cup preview: A draw will do for both sides

A draw in the United States' meeting with Germany on Thursday would be enough for both sides to progress into the World Cup's knockout stages.

Share All sharing options for: United States vs. Germany, 2014 World Cup preview: A draw will do for both sides

The United States were left devastated by a last-gasp equaliser in their 2-2 draw with Portugal last time out, as the result ensuring they head into a tough final group game with their spot in the last 16 of the World Cup still to be confirmed. However, given the USMNT only need to draw with Germany to make it into the knockout stages, their position is still pretty healthy.

In a very happy coincidence, Germany would be rather happy with a draw too, as that would guarantee they advance as group winners. But USMNT boss Jurgen Klinsmann has rejected the notion both sides will ease off and play for the draw, as his team is "not made for ties." But one imagines if a draw conveniently comes along, Klinsmann wouldn't be too upset.

For Love of Country

Celebrating the USMNT and a unique diversity

Celebrating the U.S. Men's National Team, its underdog status, and a diversity that can only be described as American.

For Love of Country

Celebrating the USMNT and a unique diversity

The United States may well name an unchanged lineup from the team that drew 2-2 with Portugal last time out. Jozy Altidore has been declared out for the match, so expect Clint Dempsey to remain the team's lone striker.

Germany are believed to be monitoring the fitness of Jerome Boateng and Sami Khedira, who have been struggling with thigh and knee problems respectively recently. However, both were in training on Monday, and so should be fit to be involved in some capacity. If either is declared unavailable, Shkodran Mustafi and Bastian Schweinsteiger would likely be the respective first-choice replacements. 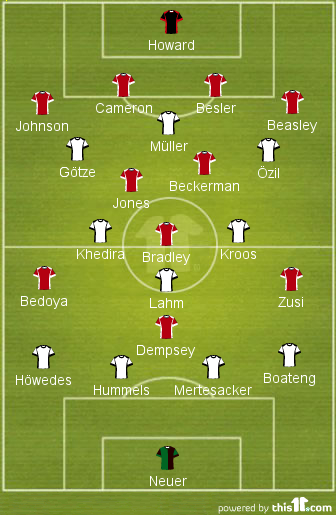 Germany's fluidity vs. the United States' defence - Germany are a strange team, who can look extremely vulnerable at the back but even more threatening going forward. So far coach Joachim Löw's experiments with a fluid front three of Mario Götze, Thomas Müller and Mesut Özil have shown promise, with their freedom to interchange and pull defenders out of position causing problems for defences. If the USMNT's back line allows itself to get pulled apart as Portugal did, Die Mannschaft will probably win the game.

Germany's central midfield vs. the United States' pivot - Whereas the United States will likely play with Michael Bradley ahead of a midfield pivot of Kyle Beckerman and the more mobile Jermaine Jones, Germany will have two midfielders given the freedom to roam either side of holding player Philipp Lahm. Toni Kroos and Sami Khedira are both powerful players who are great at bursting forward into space in and around the opposition box -- space Beckerman and Jones can't afford to give them. Positional discipline will be key here.

The wide battle - Make no mistake, the United States have a real chance to cause Germany harm in this match, and a lot of their success could come in the wide areas. Much like Belgium, Germany's defensive Achilles' heel is a lack of natural fullbacks. With Marcel Schmelzer left at home, Philipp Lahm preferred in central midfield, and Erik Durm only making the bench, Löw has an alarming propensity to use natural centre-backs like Jerome Boateng, Benedikt Höwedes and Shkodran Mustafi out wide.

On the ground in Brazil

SB Nation's Ryan Rosenblatt is in Brazil for the World Cup, wandering around with a large group of US Men's National Team supporters. Follow along with him.

On the ground in Brazil

These players lack the technical ability and mobility of natural fullbacks, which the United States could take advantage of through overlapping runs from their fullbacks, Fabian Johnson and DaMarcus Beasley -- the former in particular having impressed against Portugal. If they can isolate these defenders and link with wingers Graham Zusi and Alejandro Bedoya, Clint Dempsey should have balls to attack in the box.

It'd be quite understandable if these sides didn't play with their intensity turned up to 11 here. We may see goals, but probably not a lot of them. 1-1.