USA vs. Germany: Final score 0-1, USMNT defeated but still advance to the knockouts

Despite going down 1-0 to Germany, the United States still join Die Mannschaft in the World Cup knockout stages.

Share All sharing options for: USA vs. Germany: Final score 0-1, USMNT defeated but still advance to the knockouts

Germany recorded a comfortable 1-0 victory over the United States in a soggy Recife on Thursday, though Portugal's 2-1 win over Ghana in the other Group G game ensured the USMNT progress into the knockout stages as runners-up on goal differential. It wasn't a particularly good performance from Jürgen Klinsmann's side, but with advancement guaranteed, they probably won't be too concerned.

The opening exchanges of the game were rather ominously dominated by Germany. It took them just a couple of minutes to create an opening, though Thomas Müller couldn't get a clean contact on Jerome Boateng's cross in the penalty area.

Die Mannschaft continued to pepper the U.S. box with crosses, but a mixture of excellent handling from Tim Howard and equally important last-ditch defending from Omar Gonzalez ensured the early barrage was withstood. If Klinsmann thought his home nation would do him a favour and settle for the draw, he was sadly mistaken. 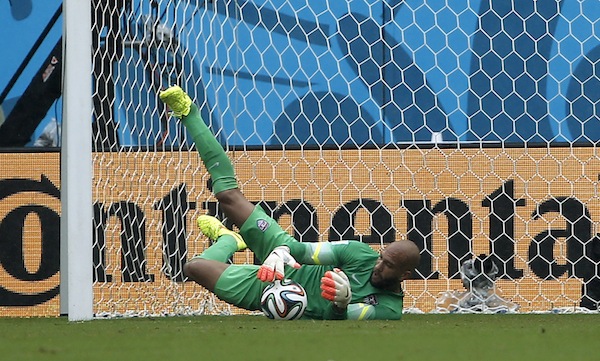 Tim Howard was a key factor in the USA advancing beyond the Group stage, Photo credit: Winslow Townson-USA TODAY Sports

However, as the half wore on the U.S. started to see more of the ball, relieving some of the German pressure by pushing higher up the field themselves. Their best effort on goal came courtesy of Graham Zusi midway through the opening half, but he fired over the crossbar from the edge of the penalty area after a quick counter.

Germany responded with another half-chance 10 minutes before the break, though Mesut Özil fired right at Howard after wriggling into some space in the U.S. penalty area. By halftime, the game was pretty even, and the frantic tempo of the opening 20 minutes had given way to a more fragmented affair.

It didn't stay that way for long into the second half, with Germany capitalising on the halftime introduction of their veteran striker Miroslav Klose. With a more out-and-out striker on the field, Germany's play became more direct, with deep crosses catapulted towards the veteran striker. He latched onto the end of one five minutes after the break, but his attempt went over from close range.

It was a sign of things to come for the U.S., who went behind within minutes. After some penalty box pinball on a Germany corner, the ball popped out to Thomas Müller on the edge of the box. With a brilliant strike he drilled the ball beyond Howard and into the back of the net to continue his extraordinary run of form at this World Cup.

The lone goal of the match between USA and Germany.

When will the USA play next?

The United States will play the winner of Group H on July 1.

Thomas Müller scores for Germany When will the USA play next?

Germany looked comfortable after taking the lead, with the U.S. struggling to win the ball back and keep it for any sustained spell. With little invention and certainly no goals forthcoming, American fans were left with a nervous eye on Ghana's clash with Portugal. However, with the Selecção taking a late lead against the Black Stars, the U.S.'s vastly superior goal differential meant it wasn't as nervy a finish as it could have been.

The USMNT produced their best couple of chances in stoppage time at the end of the match, though Germany captain Philipp Lahm got down to make a brilliant last-ditch tackle on an Alejandro Bedoya effort in the box, moments before Clint Dempsey headed over from point-blank range. Fortunately, it didn't matter.

The U.S. will now likely play Belgium in the Round of 16, while Germany will face one of Algeria, Russia or South Korea. All will be confirmed when Group H reaches a climax later today.