Costa Rica vs. Greece, 2014 World Cup preview: Will anyone seize the initiative?

Two of the tournament's surprise packages in Costa Rica and Greece meet on Sunday. Will we see as cagey an encounter as is expected, or will someone seize the initiative?

Share All sharing options for: Costa Rica vs. Greece, 2014 World Cup preview: Will anyone seize the initiative?

There were long odds on Costa Rica and Greece meeting in the World Cup's Round of 16 when the tournament kicked off, but both of these footballing minnows have exceeded the odds to progress into the knockout stage. Costa Rica remarkably counterattacked their way to the top of a group containing Uruguay, Italy and England, while Greece squeezed through thanks to a last-gasp penalty victory over Ivory Coast.

On Sunday, one of these teams will make it through into the quarterfinals (4 p.m. ET, ESPN). Heading in, it's Costa Rica who look in better shape, but anyone who witnessed Greece's remarkable showing at the European Championships a decade ago would never write them off. On that occasion, they ground their way to their first-ever major tournament crown, and have since been the masters of organised, defensive football.

There's no reason to expect Costa Rica coach Jorge Luis Pinto to alter his side's starting lineup, with no suspension or injury concerns heading in. He should revert to the team that defeated Italy.

In contrast, Greece boss Fernando Santos may be forced into starting Andreas Samaris in midfield after Panagiotis Kone came off early in their final group game against Ivory Coast. However, goalkeeper Orestis Karnezis should be available again, despite picking up a knock in the same game. Captain Kostas Katsouranis is back from a suspension, though may well be left out for Giorgos Karagounis regardless. 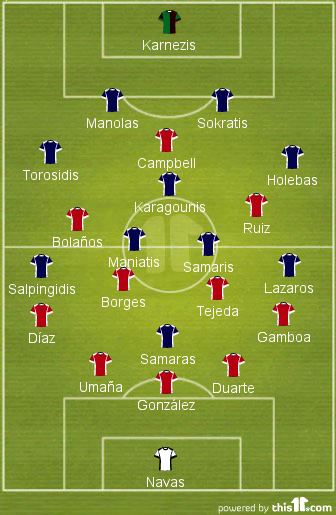 The possession battle - With both of these sides having made it to the knockouts having largely played a brand of deep, counterattacking football, it'll be interesting to see who -- if anyone -- adapts to seize the initiative in this game. It may well be that neither side is happy controlling possession, which could leave us with a rather boring midfield contest. However, if someone tries to deviate from their usual plan and take control, we could have quite an entertaining match.

The wide battle - When a formation with wingers meets one based on wing-backs, it's easy to imagine the former having the upper hand and winning the wide battle. But so far this tournament that hasn't proven to be the case, with Mexico, the Netherlands and Costa Rica having seen off such sides while playing wing-backs.

Part of the reason for this is that the wingers are sometimes conservative with their positioning, tracking the wing-backs up the flank. That means they're not high enough up the field to be a good out-ball on the counter-attack, leaving their side's lone striker pretty isolated up top. With Costa Rica's wing-backs Júnior Díaz and Cristian Gamboa having been excellent so far, they'll be hoping they can win the wide battle by driving Greek wingers Lazaros Christodoulopoulos and Dimitris Salpingidis back towards their own goal.

The strengths of these sides lie in counter-attacking and taking advantage of any space their opponents leave in behind. It's probably unlikely to expect a great deviation from either team, meaning we'll likely see a cagey encounter and few goal-scoring chances. 0-0 and a penalty shootout.