Netherlands vs. Mexico, 2014 World Cup preview: Can anyone stop the Oranje?

The Netherlands have been excellent at the World Cup so far and should be able to end Mexico's run on Sunday.

Share All sharing options for: Netherlands vs. Mexico, 2014 World Cup preview: Can anyone stop the Oranje?

Heading into the World Cup, there were concerns about how well the Netherlands would fare. Under the stewardship of the volatile Louis van Gaal they'd undergone a massive revamp, and headed to Brazil with one of the most inexperienced squads in the entire tournament. That's without even mentioning the serious injury to their best midfielder Kevin Strootman, which had forced them into a late tactical switch. However, their showings to date have dispelled all doubts.

The Oranje convincingly won all three of their games en route to winning Group B, setting up a meeting with Group A's runners-up Mexico in the round of 16 (12 p.m. ET, ESPN). El Tri have too exceeded expectations, with Miguel Herrera having extracted the best from his players and ensuring they bounced back from the pre-tournament turmoil of several coaching changes and selection controversies. However, they'll have to do something very special to progress into the quarterfinals.

The Netherlands should have centre-back Bruno Martins Indi available after he was left out of their lineup against Chile through injury. His return to van Gaal's side would likely see Daley Blind pushed back out onto the left flank, with Dirk Kuyt dropping to the bench. Robin van Persie will return to the Oranje attack after suspension, with Jeremain Lens making way. The Netherlands bench is hurt a bit by Leroy Fer missing out.

Miguel Herrera has named the same lineup in all three of his side's games at the World Cup so far, though he won't be able to do the same against the Netherlands. Midfielder José Juan Vázquez is suspended for this one, with Carlos Peña or Marco Fabián favourites to replace him in the centre. Otherwise, El Tri are expected to be unchanged. 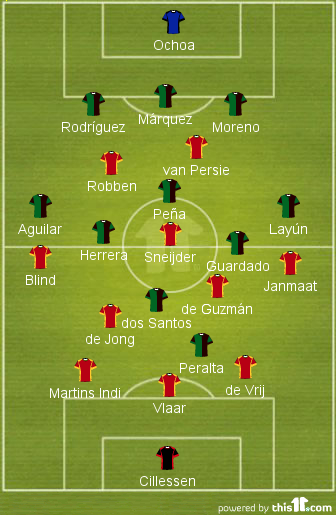 The wide battle - The Netherlands and Mexico have shaped up in similar formations at the World Cup so far, with both sides favouring the use of three centre-backs and wing-backs. Unsurprisingly, given the mammoth task these wide players are given in patrolling the flanks all on their own, they've been a very important feature of both teams. Mexico's Paul Aguilar and Miguel Layún have been two of their best performers, while Daley Blind has been a standout on the left for the Netherlands. The one-on-one battles down the flanks in this game will certainly be something to keep an eye on.

Arjen Robben vs. the Mexico centre-backs - Colombia's James Rodríguez has really stolen the show in Brazil so far, but if there's one man who can claim to have run him close, it's Arjen Robben. Despite now being 30 years old, Robben has been utterly devastating in an unfamiliar central role in the Netherlands' attack, wreaking havoc with his pace and vision. He'll drift across the front line and look for channels either side of the Mexico centre-backs in this match, and will be a key out-ball for the Dutch on the counter. Keeping him quiet is nigh-on impossible, but Mexico will have to do their best in an exercise in damage limitation.

Nigel de Jong vs. Giovani dos Santos - The man tasked with linking Mexico's attacking play through the centre is Giovani dos Santos, who has been impressive in a free role behind the main central striker Oribe Peralta so far. The Netherlands' most defensive midfielder Nigel de Jong will no doubt be keeping an eye -- and maybe a few studs -- on the Mexican playmaker, and looking to deny him room in which to work by any means possible.

The Netherlands are a superior side all over the field, and having shown such little weakness so far, a Mexican upset looks highly unlikely. 2-0 Netherlands.