France should be able to progress into the World Cup quarterfinals with a win over Nigeria on Monday.

France have been excellent at the World Cup so far, with Didier Deschamps' side showing no signs of the major tournament capitulation that haunted them throughout recent years. The team comfortably blitzed Honduras and Switzerland by three-goal margins in the group stages, and was only held scoreless by eliminated Ecuador after making a string of changes to its starting lineup.

They're certainly looking likely to progress into the quarterfinals, though Nigeria will be looking to stop them in their first knockout game on Monday. Stephen Keshi's side weren't great in the group stages, winning one of their three games, though nothing seems certain at this tournament.

France coach Deschamps will likely make several changes to a side that was held to a goalless draw by Ecuador in the final group stage game, having opted to rest several key players. Patrice Evra, Raphaël Varane, Mathieu Debuchy, Yohan Cabaye and Mathieu Valbuena are all expected to start.

Nigeria will be without midfielder Michel Babatunde after he fractured his arm, while Joseph Yobo and Victor Moses will both have to shake off knocks if they're to be involved. Keshi has a variety of versatile options to use in attack, with Ramon Azeez and Michael Uchebo likely to battle over a place alongside Ahmed Musa, Peter Odemwingie and Emmanuel Emenike. 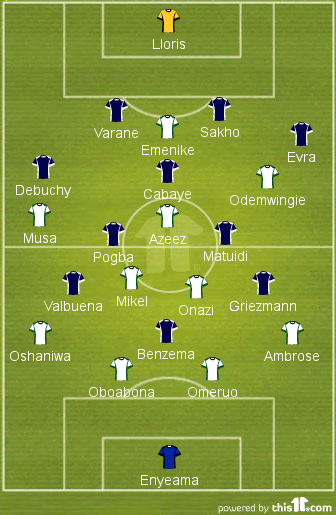 France's mobile midfield vs. Nigeria's midfield pivot - France's entire attack is predicated on cohesive movement across the field, from wingers Antoine Griezmann and Mathieu Valbuena both drifting infield from the flanks, Paul Pogba and Blaise Matuidi pushing forward from a central position to support them, and fullbacks Patrice Evra and Mathieu Debuchy stretching the play wide. With so many bodies in the entire attacking third, there's great pressure on the opposition's defensive midfielders, and John Obi Mikel and Ogenyi Onazi will certainly have their hands full in this one.

Nigeria's wingers vs. the France fullbacks - In theory, however, France's advanced movement can leave them very vulnerable on the counter-attack, especially if the attack-minded fullbacks are caught too high up the field in transition. With Nigeria's wingers Peter Odemwingie and Ahmed Musa having looked impressive so far, they could well take full advantage of any space left by Evra and Debuchy. Important here will be the Super Eagles' center-forward Emmanuel Emenike, who has been excellent at using his strength and close control to work the channels and hold the ball up on the break thus far. There's no doubt Nigeria could cause France problems at the back.

Nigeria are a talented young team, and their style of wide, counter-attacking play means they're as well-suited to playing France as anyone else in the tournament. But both individually and collectively France have looked extraordinary over the last few weeks, and they should have enough to progress into the quarterfinals. 2-1 France.

France vs. Nigeria, 2014 World Cup: Les Blues into the quarterfinals