Algeria have impressed at the World Cup, though their journey will likely end against Germany on Monday.

Germany have had an odd World Cup so far. At times they've looked like the best team in the tournament, and at others their defensive weaknesses have been made to look pretty severe. But despite not really convincing, one thing is for certain -- Joachim Löw's side should have enough to beat Algeria on Monday.

However, that isn't to suggest Algeria will roll over. They've been excellent at the World Cup so far, and booked their place in the World Cup knockout stages for the first time ever with a draw against Russia last time out. Coach Vahid Halilhodžić has already demonstrated he's more than capable of organising his team excellently, and Les Fennecs were very unfortunate to lose to Belgium after a superb defensive display to open the tournament. They shouldn't make life easy for Germany.

There's no one way to describe them

The time has come to stop relying on old stereotypes to describe an entire continent's soccer teams.

There's no one way to describe them

Mario Götze will likely return to Germany's attacking trio after being replaced by Lukas Podolski in the last match, though Bastian Schweinsteiger may well keep his place in the center of midfield with Sami Khedira's fitness questionable at present.

After Algeria impressed against Russia, coach Halilhodžić may well opt to name an unchanged lineup. However, Madjid Bougherra could return to the center of the defense in place of Essaïd Belkalem, after he was omitted for running the risk of a suspension against Russia. If Halilhodžić opts to go as defensive as possible, Saphir Taïder could come in for attacking midfielder Yacine Brahimi, changing the 4-2-3-1 to a 4-3-3. 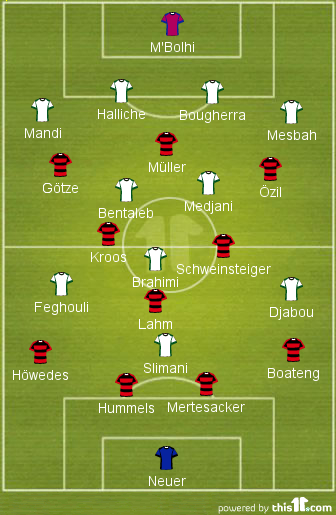 Algeria: to press or not to press? - Algeria have demonstrated an impressive versatility at the World Cup so far, having excelled with two very distinct styles. They largely frustrated Belgium in their opening defeat, sitting deep and compact and forcing the Red Devils to play in front of their midfield and defense, before breaking with speed down the flanks. In contrast, they were a lot more aggressive against South Korea, and made the most of their attacking talent to control possession and force their opponents onto the defensive. It remains to be seen how they play here, though against a technically superior team like Germany, the first option may well be the best one.

Algeria's wingers vs. Germany's full-backs - If there's one big weakness in this Germany team, it's their fullbacks -- or lack thereof. Benedikt Höwedes and Jerome Boateng are both natural center-backs shifted out wide by Löw, as is their backup Shkodran Mustafi. Though Boateng is pretty comfortable out wide, Höwedes and Mustafi are both pretty slow players, unlikely to provide much offensive thrust. They could struggle against Algeria's use of wingers, and Les Fennecs' coach Halilhodžić would be wise to tell his right-winger Sofiane Feghouli to look to isolate Höwedes one-on-one and cross into the box, especially with the aerial threat provided by lone striker Islam Slimani.

Algeria's defence vs. Thomas Müller - Germany attacker Thomas Müller has been undoubtedly one of the tournament's best performers so far, having excelled as a false nine between two inside forwards. Not only does he have the awareness and predatory instinct to attack balls into the box, but he's brilliant at drifting across the final third and creating space for his teammates to drift into. That makes him a nightmare to mark, and all of Algeria's defence will have to be very disciplined if they're to limit his influence.

Algeria have already proven they're pretty good defensively, but against Germany they'll face perhaps the most fierce attack in the entire tournament. They should be stubborn, but are unlikely to be watertight. 2-0 Germany.