Argentina vs. Switzerland, 2014 World Cup preview: Who will continue to underwhelm?

Neither Argentina nor Switzerland have played to their full potential in the World Cup so far, with both sides hoping for an improvement in the knockout stages.

Share All sharing options for: Argentina vs. Switzerland, 2014 World Cup preview: Who will continue to underwhelm?

Argentina headed into the World Cup as a genuine favourite, though their group stage performances were more than a little underwhelming. Sure, they won all three of their games, but none of them by more than a single goal. Rather than Lionel Messi being the icing on a prize World Cup cake, he's carried his side with moments of sheer individual brilliance. If they're to win the tournament, they need to improve.

But even though their performances have been pretty average, they should have more than enough to progress into the quarterfinals at the expense of Switzerland. Ottmar Hitzfeld's side were touted as dark horses before arriving in Brazil, but after the group stages there are serious questions to be asked of their defence. They'll certainly have to tighten things up to stand any chance of beating Argentina and progressing into the next round.

Belgium are yet to find their free-flowing best in Brazil, and the United States will look to take advantage.

Argentina were dealt a big blow in their final group game against Nigeria, with striker Sergio Agüero brought off with an injury. A full diagnosis has revealed a muscular tear, ruling him out for the remainder of the tournament. Ezequiel Lavezzi will likely come into the Albiceleste's attacking trident in his absence, with Lionel Messi playing to the right of centre-forward Gonzalo Higuaín.

Switzerland are without centre-back Steve von Bergen after he sustained a facial fracture in the group stages, with Fabian Schär and Philippe Senderos doing battle over his spot in the centre of defence. Otherwise, Ottmar Hitzfeld's side will likely stay unchanged. 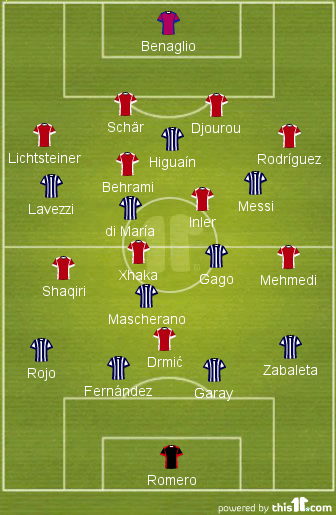 Argentina's attackers vs. Switzerland's midfield pivot - There's little debate that Argentina are the strongest team in the World Cup in terms of depth of quality in attack, but are they the best attacking unit? Certainly not to date. They've looked disjointed in the final third, and have too often relied on Lionel Messi's greatness to bail them out of trouble against compact defences. If Switzerland are to have any joy, they'll have to be just as difficult to break down as Argentina's group stage opponents, and that means a disciplined performance from their two holding midfielders, Valon Behrami and Gökhan Inler.

Josip Drmić vs. the Argentina centre-backs - On paper, Switzerland's greatest attacking threat is group stage hat-trick hero Xherdan Shaqiri. However, it's a little too much to expect him to score a goal entirely alone. Instead, expect to see him try to link with Switzerland's centre-forward Josip Drmić on the counter-attack, as he did to devastating effect against Honduras. Drmić's workrate was surprisingly excellent as a target man in that match, and he could regularly be found drifting to the flanks and holding the ball up for Shaqiri to run in behind. He'll almost certainly be given the same brief against Argentina, whose centre-backs will have to try and keep him quiet.

If the group stages have revealed anything about this Swiss team, it's that their defence is nowhere near as strong as their attack. Though the inclusion of Fabian Schär at centre-back is a step up on Philippe Senderos, their chances of keeping a clean sheet against the Albiceleste's fierce attack seems low. 3-1 Argentina.