Belgium have yet to find their free-flowing best in Brazil, and the United States will look to take advantage.

Belgium headed into the World Cup burdened with great expectation. Coach Marc Wilmots has a plethora of incredibly talented young players at his disposal, who may well collectively make up the greatest national side in the Red Devils' history. An underwhelming start in retrospect was perhaps inevitable; they'd have had to blow their group stage opponents off the continent to live up to the hype. But there's now no doubt, they're a flawed side, and one the United States could well beat on Tuesday.

However, if the USMNT are to stand a chance, they'll have to hope they're on a good day, as their performances have been more than a little erratic so far. They squeaked unconvincingly past Ghana in their opening fixture, before being unfortunate to miss out on a shock victory against Portugal in their second match. In their most recent fixture against Germany, they lost 1-0 and barely put up a fight. A repeat performance wold make life much easier for the Red Devils.

3 things to watch for in the match

Want to know how to tell if things are going well for the United States against Belgium, or just figure out what they're trying to do? We can help.

3 things to watch for in the match

The good news for the USMNT is that Belgium head into the game with a string of injury and suspension concerns. Backup full-back Anthony Vanden Borre will miss the rest of the tournament after breaking his ankle, while midfielder Steven Defour is suspended after being sent off against South Korea. Vincent Kompany faces a late fitness test, while Thomas Vermaelen is out. There are question marks over whether Marouane Fellaini will maintain his position alongside Axel Witsel in midfield, and the off-form Romelu Lukaku may well be replaced by youngster Divock Origi.

Meanwhile, the USMNT should have a full-strength team available, including striker Jozy Altidore. There were fears his tournament was run after he was substituted early in the U.S.'s World Cup opener against Ghana, though coach Jürgen Klinsmann has declared himself confident the attacker would be fit to play against Belgium. He could come straight back into the starting lineup at the expense of Brad Davis. 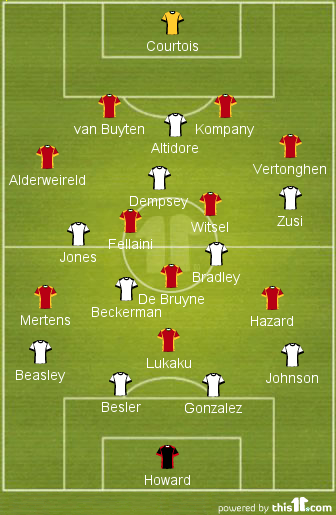 Belgium's attack vs. the United States' defensive discipline - Considering the number of creative players they have in their starting lineup, Belgium have found it surprisingly difficult to break apart deep defences so far this tournament. It took them 70 minutes to score against Algeria, 88 minutes to do so against Russia, and 78 against South Korea. If they United States are disciplined when out of position, then they could well have a similar stifling effect.

The key will be for Jermaine Jones, Kyle Beckerman and Michael Bradley to ensure the midfield and defence play extremely close together when out of possession, not allowing room for Eden Hazard, Kevin De Bruyne and Dries Mertens to work their creative magic and thread cutting passes through the middle. If they do give them room, their quick feat and brilliant vision will ensure the USMNT are punished.

Altidore out for U.S., Kompany starts for Belgium

There are lots of changes for Marc Wilmots and Belgium and two for Jurgen Klinsmann.

Altidore out for U.S., Kompany starts for Belgium

Belgium's aerial threat vs. the United States' centre-backs - The good news is that the USMNT have been pretty solid through the middle at the World Cup so far. The bad news is they've not been quite as watertight at dealing with crosses into the box from wide areas.

For the most part, Belgium have only resorted to crosses late in matches when searching for a goal, though with the aerial threat of Marouane Fellaini, they've done so pretty successfully. The USMNT will have to ensure they're prepared for such an eventuality, as it could become important if they're leading late in the match.

The United States' wingers vs. Belgium's fullbacks - If there's one area of obvious weakness in this Belgium team, it's their fullbacks. That's because they don't exist. Instead, coach Wilmots will be resorting to shoving natural centre-backs out wide, who could struggle if they're isolated in one-on-one situations.

It'll be interesting to see if Klinsmann adapts his selection to target such a weakness, as if he lines up in the narrow 4-4-2 that they started the World Cup with, it'll be harder to maximise their advantage out wide. If he stays narrow, then there will be an awful lot of pressure on the excellent Fabian Johnson and the slightly less-excellent DaMarcus Beasley to push forward from defence.

Michael Bradley vs. Axel Witsel - Michael Bradley has had a frustrating tournament. At times he's looked excellent, using his expansive passing range to thread teammates through on goal and set up quick counters. At others, he's made huge mistakes, such as crucially giving the ball away moments before Portugal's last-gasp equaliser in the group stages. If he's back on song and Belgium let him dictate play, he'll be a massive asset for the USMNT, if he's poor or Axel Witsel marks him out of the game, they could struggle.

Belgium have certainly looked flawed at the World Cup so far, but individually they're certainly a better side than the United States, and have looked pretty solid at the back so far this tournament. Unlike some of the other teams in the knockouts, they're not liable to leave much space for the USMNT to surge into on the counter-attack, and should eventually be able to break the American defence down. 1-0 Belgium.