The Three Lions have a stable of great young players, but the immobile Steven Gerrard and out-of-form Wayne Rooney are keeping them out of the team. Everything's the same as it ever was for England.

On May 31, England dispatched an obligingly inept Peru 3-0 at Wembley Stadium. Some international friendlies reveal new tactical schemes or unearth major weaknesses, but we learned virtually nothing new from the final warmup before the Three Lions' trip to Brazil begins in earnest: We already knew Daniel Sturridge is capable of wonderful goals, we knew the central defensive pairing of Gary Cahill and Phil Jagielka moonlights as a major attacking threat from set pieces and we knew that Wayne Rooney will probably ruin England's World Cup.

Which should be crazy, considering that Rooney is undoubtedly England's most talented and most effective player, at least when he's at top form. But therein lies the problem: Rooney is undroppable, because he is Wayne Rooney. And yet, half fit and out of form, he's the most obvious impediment to this English attack coming together. Which, of course, we knew already. 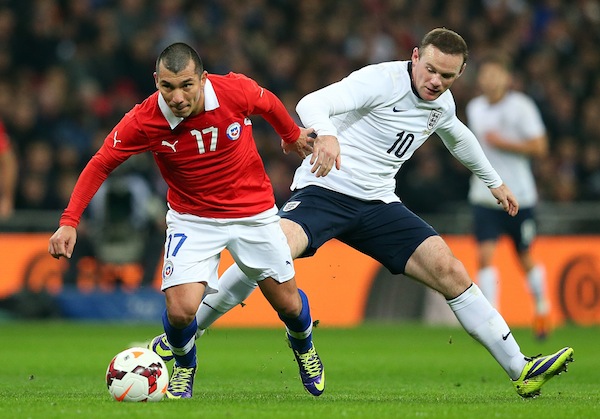 Watching Rooney against Chile was a veritable parade of missed opportunities and poor touches. The man who was supposed to be England's creative spark instead served as a sort of waddling graveyard for attacking football. Flanked by two decent options in Adam Lallana and Danny Welbeck (the former admittedly far more decent than the latter) and behind one of England football's most incisive strikers in Sturridge, Rooney failed to create much of anything. The hosts' three goals came from a throw in, a throw in and a corner.

The Rooney problem is not unique to England. David Moyes' increasingly farcical time at the helm of Manchester United saw the manager stick all of his eggs in the Rooney basket, a move that looked to be paying off early in the season but eventually proved too many eggs for one man to bear, culminating in the hilarious sight of the 28-year-old, fresh off signing a £300,000-per-week contract, starting in a Champions League quarterfinal loss despite literally being unable to kick a ball properly due to a toe injury.

The rest of England laughed heartily at Rooney's Allianz misadventure, but now the country's about to get their own version of it -- in playing through injuries when he shouldn't have, the forward has seemingly ensured that he's never really recovered properly. And so he'll keep running himself into the ground, and the country will suffer for it. If it was any other player, Hodgson would be making plans to drop him. Ross Barkley is waiting in the wings. Raheem Sterling should surely be getting a look. Even Steven Gerrard would be a better option at No. 10 unless Rooney turns his form around.

But he won't have to turn his form around, because Rooney's not in this squad on merit. He's going to start every game at the World Cup because he's Wayne Rooney, and he's proven himself at least theoretically capable of being a world-class player. More than anyone else, he represents the rampant optimism that the English try so hard to disguise with their cynical veneers -- Rooney can be an elite player, and so we'll plan for him to be an elite player, injuries and form be damned.

If this were England's only major problem, that would be one thing. But their other undroppable star, while nowhere near the disaster on the pitch that Rooney represents, is also going to have a role in holding the team back. 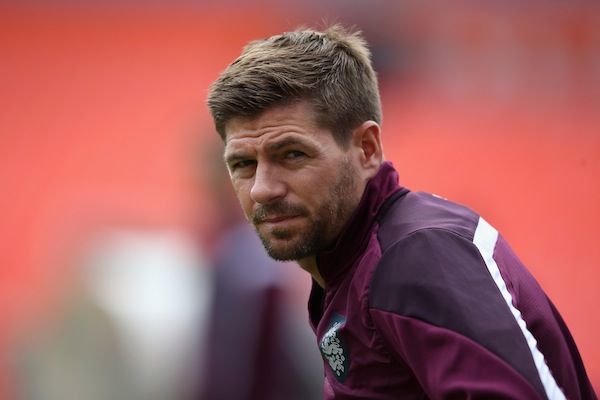 Gerrard is the captain of Liverpool and England. He's coming off an excellent season for his club in which he adapted to a new position and helped turn the Reds into a serious contender in the Premier League for the first time in five years. He is, according to whom you're asking, England's best midfielder. And like Rooney, the case can be made that Roy Hodgson is crippling his team by Sharpie-ing his name into the lineup.

Brendan Rodgers converted Gerrard into something approaching a defensive midfielder this year, and that's where he's expected to play for England, partnering Jordan Henderson in a double pivot. The problem is that while Gerrard works there for the Reds, he's unlikely to be as effective for the national team, who are most certainly not looking to play along the same lines as Liverpool. All-out attacking blitzes are neither Hodgson's style nor are they particularly suited to short tournament football.

And unless you're playing a ridiculous attacking game (which is, one supposes, at least feasible against Costa Rica), using Gerrard as your most defensive midfielder makes no sense at all. Liverpool's leaky defence was at least partially attributable to Gerrard's poor positioning, and although the captain makes for a more free-flowing attack, England will want to be tight at the back rather than exposed, and using Gerrard as the lone holder means frostbite-level exposure.

And like Rooney, the case can be made that Roy Hodgson is crippling his team by Sharpie-ing Gerrard's name into the lineup.

Which of course means he won't be a lone holder. As we saw against Peru, fellow Liverpool man Henderson will have his forward instincts curtailed in order to accommodate Gerrard's place in the side. And, as we saw against Peru, whose irregular jaunts up the pitch involved either occupying the space theoretically held by Glen Johnson or scything straight through the midfield, it's probably not going to work that well. In Brazil, England will face Uruguay and Italy, teams far more adept at exploiting the holes that the Three Lions midfield vacates.

It's not just a defensive problem either. With Henderson's forward runs restricted and Rooney in the hole, England don't have a reliable way of moving the ball up the pitch that isn't a diagonal ball to a winger, and so despite possessing the most creative, unpredictable attacking players since Paul Gascoigne's generation, Roy Hodgson's England are going to be as predictably dull as ever.

In a perfect world, neither Gerrard nor Rooney are undroppable, and both need to fight their way into the side on current form. As it is, England are built around a captain who doesn't fit the system and a star attacker who hasn't played well for months. There's room for optimism around this side, but as long as they're tied to their sacred cows, they're going to be in trouble.

That, at least, is nothing new.