In 2011, Mexico looked like World Cup darkhorses. In 2014, they're relieved that they managed to qualify.

Share All sharing options for: How Mexico went from riches to rags in one World Cup cycle

The 2014 World Cup was supposed to be Mexico's big moment in the sun, their first run past the Round of 16 since they hosted the tournament in 1986. At least that was the thinking on June 25, 2011.

Mexico were standing in the middle of the Rose Bowl, surrounded by the roars of a capacity crowd that had watched them turn a 2-0 deficit into a 4-2 win to claim the 2011 Gold Cup. It was a marvelous performance, one that showed off a new generation of talented youngsters unlike any the country had ever produced. They had beaten their bitter rivals, the United States, and looked so much better than the rest of the CONCACAF that their dreams were now much bigger than regional; they thought they could capture the World Cup.

Years earlier, Mexico had undergone an overhaul of their youth system. The Primera Division required teams to sign domestic talent, that they play their youngsters and that each team pour money into their academies. The result was Javier Hernandez, Pablo Barrera, Andres Guardado and Hector Moreno. Toss in the Barcelona-schooled Giovani dos Santos and El Tri had a remarkable core of young talent, one that only figured to get better with time. 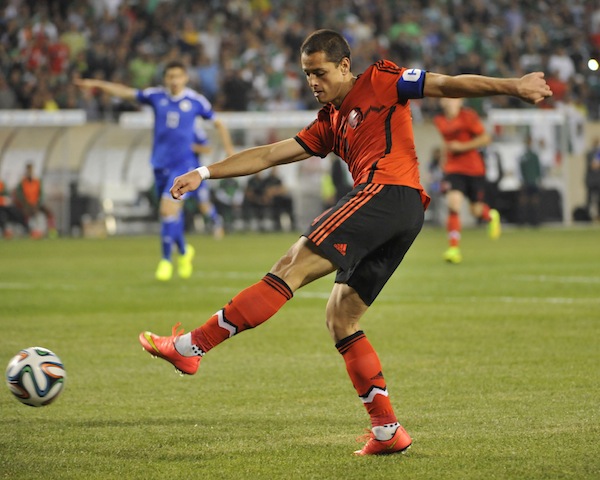 Mexico finished third in the 2011 U-20 World Cup, won the 2011 U17 World Cup and won the gold medal at the 2012 Olympics. If the 2011 Gold Cup win wasn't enough to make it clear that Mexico was a force to be reckoned with, just wait until they got their young reinforcements.

As World Cup qualifying got underway in the summer of 2012, Mexico weren't even a topic of discussion. They were so much better than the rest of the region that the only question was how early they would qualify. After taking 18 points from six matches in the third round, they were as irrelevant to qualifying as ever, having already been penciled into the World Cup.

Mexico were a monster. They were the best team CONCACAF had ever seen.

But even in 2012, cracks began to show. They lost to Ecuador in a friendly and then did the unthinkable when they lost at Estadio Azteca, to the U.S. of all teams. That was also a friendly, but things weren't looking as rosy as they did the year before.

Chicharito was supposed to lead Mexico into their place among the world's best, but the signing of Robin van Persie had marginalized him at Manchester United. No longer was having a Mexican at one of the world's biggest clubs an asset. Meanwhile, dos Santos had finally found club success with Mallorca and then Villarreal, only for his international form to tail off, while Barrera tore his ACL.

But the biggest problem was in the middle of the pitch. El Tri rode Gerrardo Torrado and Israel Castro in 2011, but they were aging and Mexico needed to replace them by 2014. Jesus Zavala was one obvious choice, but Jose Manuel "Chepo" de la Torre couldn't find a partner for him. He tried everyone, from Jonathan dos Santos to Manuel Viniegra to natural defender Carlos Salcido, but none fit the bill.

By the time the final round of World Cup qualifying started in 2013, Mexico were still the best team on paper, expected to toll through the region, but there were concerns internally. They had their lack of form and their hole in the middle, but maybe most concerning was their manager.

Chepo, like the rest of the team, was a god in 2011. He had taken over a program in disarray after the 2010 World Cup and instilled discipline. No longer were players partying the night before matches or yelling at the referee as the ball went by. He could do no wrong, but with each friendly loss, with each attempt to change the way the team played, with each stoic and stubborn press conference comment, the Mexican public began to lose faith in their manager.

It took all of one Hex match for Mexico to go into full-blown panic mode. They drew Jamaica at home, then followed it up with two more draws. Through three matches they had no wins and on September 6, they lost at home.

The next two months went as follows:

Mexico had to get on their knees and pray to the soccer gods that the U.S. would beat Panama, because that was their own way to qualify for the World Cup. It happened in miraculous fashion, and a fourth manager -- Miguel Herrera -- was hired to guide them through an intercontinental playoff.

Mexico beat New Zealand in a two-legged playoff to qualify for the World Cup, but El Tri were a shell of their former selves. They had beaten and battered in the Hex, winning just twice, and had only qualified by the good grace of their rivals, the ultimate humiliation.

Worse, there isn't a lot of reason for optimism. Chicharito never regained his form, nor did Barrera, and dos Santos wasn't the revelatory figure Mexico had hoped he would become. Their defense is such a mess that 'Maza' Francisco Rodriguez -- a 32-year-old in such poor form that Stuttgart had released mid-season just to get his wages off their books -- was still in the mix. They had to resort to calling up Rafael Marquez. Even their young kids haven't quite come good, as Diego Reyes and Hector Herrera had their national team careers temporarily stunted by moves to Porto, where they didn't start every match.

Mexico's emphatic Gold Cup win was only three years ago, but those three years now feel like decades. They don't resemble the team that gave their country so much hope in the slightest. Forget being a World Cup darkhorse, they're just hoping to avoid embarrassment in Brazil.

Forget being a World Cup darkhorse, they're just hoping to avoid embarrassment in Brazil.

To make matters worse, they haven't been able to catch a break. Juan Carlos Medina and Luis Montes, two figures who looked to solve their central midfield problem, were injured in World Cup warm-ups. Herrera's 5-3-2 doesn't work so well if the lynchpins of his team are going down injured.

Now Mexico are left to cling to history. They have made it to the Round of 16 in each of the last five World Cups, so they get out of the group. It's what they do. But this isn't your average Mexico team.

This Mexico team gave the country unprecedented hope. They teased them with greatness and dreams of immortality. They also took the program to new lows.

Nothing about this Mexico team is normal. It wasn't normal in 2011 and it isn't normal today. In a pre-World Cup friendly against Ecuador, Marquez reportedly fainted at halftime and injured his foot falling over. If there was ever a time to believe the soccer gods were working against them, it was then.

Maybe Mexico sold their soul for 2011. At least that would provide an explanation for an inexplicable four years. Or maybe it just serves to provide evidence of how quickly things can change, and maybe they will change for the better in Brazil.

If Mexico has taught us anything, it's not to expect anything except the need for a drink.