A brief history of the World Cup opening ceremony

Share All sharing options for: A brief history of the World Cup opening ceremony

Before the soccer, the opening ceremony. Though not quite as much of a cultural institution as their Olympic counterparts, the World Cup's opening ceremonies have been quietly expanding in size, importance and grandiosity over the years. From a quick speech and maybe a few flags, to the frankly brilliant pageant of South African joy in 2010, here's a quick run through the vital elements of any self-respecting modern opening ceremony. 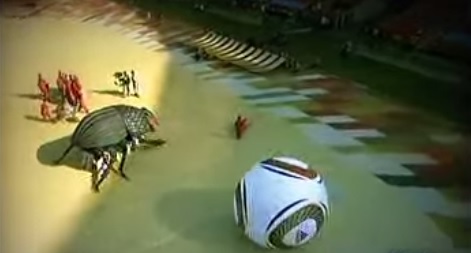 An opening ceremony without dancing is no opening ceremony at all. One of the most delightful things about humanity is the sheer number of ways that the various nations and peoples have found to rhythmically wiggle themselves. In 1958, Sweden welcomed the world with traditional folk dancers; in 2006, as if to prove how far the continent had developed in the intervening years, Germany deployed a platoon of dudes in knee-socks and waistcoats, then some women dressed as eggs, and then a gaggle of breakdancers dressed tastefully in the latest threads from adidas, Official Head-Spinning Partner of the FIFA World Cup.

Well, dancing without music is mime, and mime is weird.

There are two kinds of opening ceremony music: that which is the background to something else, and that which is the focal point. When it comes to the former, Korea and Japan are perhaps the best of the recent bunch, opting for an epic cinematic soundtrack to "a prayer for world harmony through mutual understanding in three parts." Or, massed dancers in interestingly-shaped hats, if you prefer. As for the former, South Africa pretty much nailed it, pairing legendary trumpeter Hugh Masekela with a number of more contemporary compatriots, then flinging in a curve ball in the shape of noted South African soccer fan R Kelly.

Beyond that, well, there's always space for drumming, of course, and generally at least one official pop song that is greeted with indulgent chuckles by the overseeing dignitaries, general bafflement from the commentators, and stilted dancing by the crowd. Fundamentally, it's hard to get this part too wrong: as long as you steer clear of anything too arty and don't drag the national anthems out for too long, everybody's going to be happy. Even if you present them with this guy: 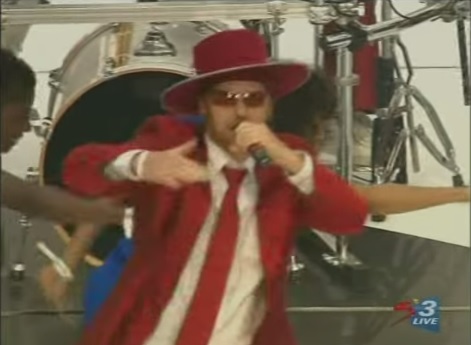 The parading of children is a crucial part of modern soccer. Teams take mascots out onto the pitch with them, ensuring that (a) a few youngsters have excellent anecdotes with which to impress their peers, and (b) any animosity between the players has to be suspended until the little ones are out of the way. You can't fight in front of kids. That is not okay.

When it comes to opening ceremonies, children get liberally sprinkled over pretty much everything. In 1966, England's ceremony consisted of nothing more than schoolchildren wearing kits and carrying flags, and Mexico kept the same theme for 1970, adding only sunshine and balloons. Expect more of the same in Brazil. In 2006, Germany adorably decided to structure the entire thing around two young children: a smiling, waving, grinning little girl and a small, serious-faced boy on a bicycle with a football tied to the back.

There is nothing the world likes more than the chance to look at famous people, and there is nothing famous people like more than being looked at. This virtuous circle. Most star-struck ceremony organizers at least attempt to integrate the famous people into the ceremony in some way or other, so special kudos, then, goes out to Germany 2006, who decided to have Claudia Schiffer accompany Pele and the trophy out to the middle of the stadium, for no apparent reason beyond her being both German and photogenic.

But nobody, but nobody, gets past the USA on this one. Not even England, who had an actual Queen. Oprah Winfrey! Daryl Hall! (you know, from Hall & Oates!) Diana Ross! John "Totally Just Had To Google This Bloke" Secada! And while the rest of the world laughed at Ross missing her penalty, yet the goal exploding regardless, there can't have been anybody more relieved than Winfrey. That screwed-up spot-kick guaranteed that nobody would ever remember her falling off the dais.

In 2002, the organizers made a bold call. Typically, the speeches come after all the dancing, singing, waving and parading, a sensible policy that ensures both in-stadium and television viewers can be at their best. The former, having been squinting at morris dancers for the last half-hour, are happy, confused and slightly tired; the latter can go and make a cup of tea. But in Seoul, the organizers put the suits up first, and the inevitable happened: Sepp Blatter got booed.

Blatter won't be speaking to the Brazilians on June 12 either. At the opening game of the 2013 Confederations Cup, Brazil's President Dilma Rousseff was booed as she spoke to the crowd. In stepped Our Glorious Leader, certain that he knew just how to placate a furious nation. "Friends of Brazilian football, where is the respect and the fair play, please?"

This did not go down well.

Why else are you having an opening ceremony, if not to wear all those items of clothing that are both a key part of your national identity and completely outmoded, impractical and slightly ridiculous? Germany have gone in for this on both occasions they've hosted, with waistcoated men and bonneted women aplenty. In 1982, Spain nodded to its regional identity by parading large, traditionally-garbed puppets around the place. In Italy, the 1990 World Cup began in Milan with that most respected of Milanese institutions: beautiful women wearing expensive clothes walking down catwalks.

The best, however, came in Mexico 1986. The organizers decided that traditional dress was one thing, but for full impact, historical dress was very much the way to go. That this boiled down to attractive people wearing very little is, we're sure, entirely coincidental. 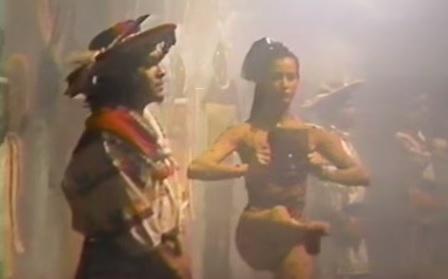 That second Mexican World Cup also gave us the finest contrast between the inevitable montage -- usually shown on screens in the stadium but largely aimed at the viewers at home -- and the on-field action. The television follows a winged Mexican through Mexico's jungles, over rivers and mountains, to the ancient cities and into the mighty pyramids, where (as pictured above) the ancient peoples of Mexico can be found, along with their occupiers, artfully disporting themselves in front of wall paintings.

Then we cut to the stadium, where the traditionally-garbed Aztec revivalists can be found doing their Aztec revival thing. And we notice that while they're doing their best, the entire ceremony is happening in one corner of the stadium. Pity the poor sods in the cheap seats. There's not even a flag-waving schoolchild in sight.

This is the best way to make a lasting impression. The standout moment of 2010 was the emergence of a gigantic beetle, which scuttled its way into the stadium and spent some time fussing with an oversized Jabulani. Japan and Korea were more subtle about it, choosing to intersperse their dancers with television-headed aliens (above). France, in 1998, channeled the best European spirit of Jeux Sans Frontieres to baffle the world with a magic garden populated by psychedelic soccer-playing butterflies and flowers that spat footballs.

But perhaps the finest innovation of all came in 2006, when the Germans opted for a ring of men and boys with large square bronze bells hanging down from their waists. Perhaps this is some long-standing German tradition of which SB Nation is unaware, in which case please excuse our ignorance. But when the time came to ring the bells, well, it did look a little peculiar ...