So you want to know more about the World Cup ...

Share All sharing options for: A World Cup beginner's guide

Once every four years, a lot of people who don't follow soccer closely start following soccer. They usually don't get caught up until they're already few weeks into the World Cup, so we thought we could help with the basics if you're new to this whole soccer thing.

What is the World Cup?

It's a tournament held once every four years to crown the best international soccer team in the world. It lasts five weeks and FIFA says half of all people in the world watch at least one match. It's kind of a big deal.

Why is it every four years?

Unfortunately, there is not infinite money in the world so it would be near impossible to spend the billions necessary to host a World Cup every year. Hosting the tournament costs a lot of money and requires a lot of planning and building. There are also a bunch of events in between World Cups, like continental championships and qualifying.

Plus, could you really afford to be sick for a month every summer and not get fired?

Who needs a World Cup when we have the Olympics?

The Olympics is a kiddie tournament in soccer. It is played with Under-23 teams -- plus three overage players with nothing else do that summer -- so it doesn't crown a champion of anything, except the awkward in-between age when you should be competing to play in a World Cup, but aren't really good enough.

Oh, and the IOC keeps all of the money from the Olympics and the soccer world is not having that.

When we last saw the World Cup, it was in South Africa. Spain were crowned champions, Nigel de Jong hadn't been charged with assault and Lionel Messi was the best player in the world.

Ronaldo without a shirt

How did these 32 teams get here?

They flew, apart from Brazil, who were already there. And before that, they flew to a bunch of places while taking part in a two- or three-year qualifying process. Qualifying is broken down by region, with Europe getting 13 automatic places, Africa getting five, South America and Asia four, and CONCACAF -- which is North America, Central America and the Caribbean -- gets three.

And just in case that's not enough math for you, there are half places, where a team from one region qualifies for a playoff against a team from another region. Those are awesome because two legs determine a spot in the World Cup. Awesome, unless your team is in it. Then you spend 180 minutes crying in the corner.

The only exception is Brazil, who qualified automatically as hosts.

How does FIFA choose the host?

They find the country whose combination of most money and fewest morals best suits their bank accounts.

A firsthand look at the corrupt home of the World Cup

When you're talking about a global organization and the first answer in a word association game is "corrupt" ... you don't want to know.

Where are the matches being played?

All matches are being played in Brazil. It's a really big country in South America. That guy from the show River Monsters is always there catching giant catfish, piranhas, and arapaimas (a fish that can grow upwards of eight feet long). 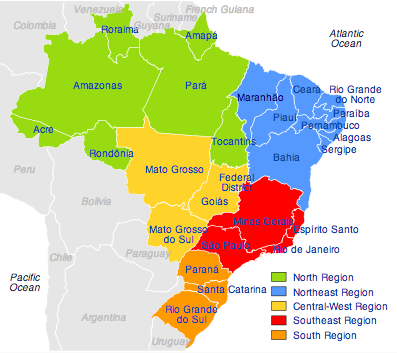 When are the matches being played?

The tournament starts on June 12 and runs through July 13. There will be matches on all but seven days during those weeks, so there's a lot to watch.

There are also these things called time zones. You may have heard of them. Most of Brazil is in a time zone one hour ahead of the east coast of the United States, but two host cities -- Manaus and Cuiaba -- are in the same time zone as New York. Brazil has a third time zone too, but they aren't playing the World Cup there.

The U.S. has multiple time zones too, so you'll have to check a schedule to be sure about when you'll need to take an extended lunch break or fake a doctor's appointment.

How do you win the whole thing?

You finish in the top two of your group, then win four knockout matches. Also recommended: being good at soccer.

Can you drink beer from the World Cup?

You cannot because the name of the tournament lies to you. The trophy isn't even a cup.

What if teams are tied in the group stage?

If teams in the group stage have the same number of points, then the team with the best goal difference (that's goals scored minus goals conceded) advances. If that's tied then the team with the most goals goes through. And if the first six tiebreakers all can't do the job, they just say "screw math" and draw lots. Seriously.

What if teams are tied in the knockout stages?

Draws in the group stage are okay, but in the knockout stages you need a winner, so they play 30 minutes of extra time. They'll play all of those minutes no matter if they score 100 goals or zero, so you're guaranteed to see a half-dozen players cramp up and/or puke, but then if they're still tied, they go to penalty kicks.

Penalty kicks are when everyone watching gets really excited, everyone involved hates their lives, and England loses.

Why is there a Group of Death?

Because it sounds cool, and scary, and since there's always a chance you'll catch malaria in Brazil, this year's tournament has an actual, but minimal, chance of real death.

But the reason it exists is because only the top 8 teams are seeded when they make the groups. The rest are drawn by regions, which can produce a group with more than two really good teams. In the case of this tournament, there might be three Groups of Death, including Group G, which the United States are in.

The host has won six of 19 World Cups and, until South Africa in 2010, had always made it out of the group stage so the advantage is huge, not that Brazil needs it.

Which team is most hatred-worthy?

Which non-U.S. team should I root for?

The team playing against Luis Suárez. This might also help: 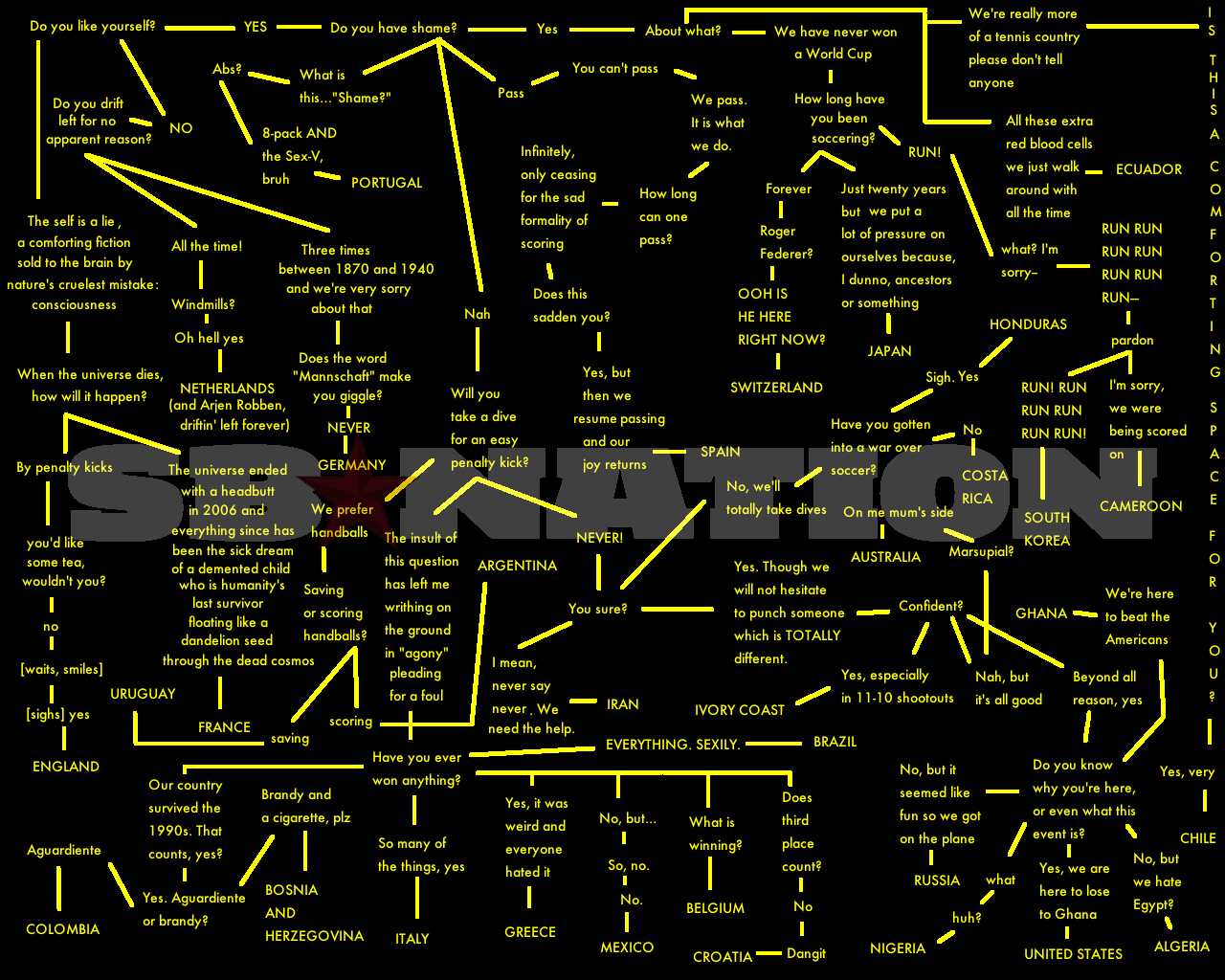 Why is everyone so sweaty?

Because if you were in the kind of shape soccer players are in, you would want to be sweaty and take your shirt off too.

Bless you, Brazil, for being so warm. And bless you, FIFA, for catering to big, important countries who don't want their citizens watching games at midnight, and so scheduling matches during the hottest, sweatiest part of the day.

They're not stopping the clock while everyone runs around and celebrates a goal?

The clock in soccer only stops at the end of each half so no, it doesn't stop and it's not supposed to. Instead, the ref keeps track of how much time is wasted when the ball being out of play, during injuries and for goal celebrations, then adds it on at the end, but you are forgiven if you think they just pretend to play with their watch then arbitrarily pick three, four, or five minutes. Math is hard.

Is it okay if I'm watching these games with my pants off?

Better than being a full-kit wanker.

How can I tell if a player rolling on the ground is really hurt?

If a player is rolling, they're not hurt. Hurt players lie still. The rolls are in fact signals from the player to his colleagues. One roll: I'm tired, give me a moment. Two rolls: shout PENALTY as loud as you can. Three rolls: they're getting on top of us here, let's take a break. Four rolls: could somebody come over and start a fight?

Why is there always a new ball?

And just in case that annoying kid wasn't enough reason, there is also the annoying adult, who plays in the World Cup and needs to be able to whine about how much the new ball moves through the air when he screws up because "I suck" isn't a good answer when an angry mob is chasing you.

Where is that Landon Donovan guy I keep hearing about? 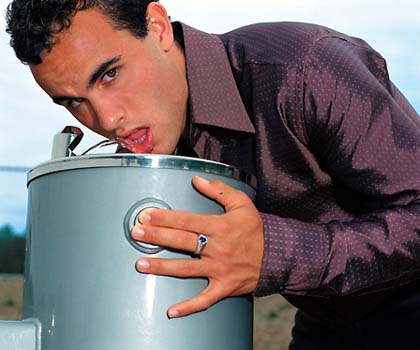 Yeah, but Zlatan Ibrahimović would never take that picture.

1. You don't tell Zlatan what he will and won't do.
2. He's too busy for these World Cup shenanigans.
3. Screw you, Sweden. Get better so we can see Zlatan.