FIFA's suspension of Nigeria is even messier than it looks

FIFA's suspension of the Nigeria Football Federation for government interference is, unsurprisingly, part of a story permeated by allegations of corruption.

Share All sharing options for: FIFA's suspension of Nigeria is even messier than it looks

The champions of Africa have been suspended by FIFA. The FIFA emergency committee decided on July 9 to suspend the Nigeria Football Federation (NFF) on account of government interference. FIFA cited Article 13, Paragraph 1 and Article 17, Paragraph 1 from their statutes which combine to state that association members should be able to handle their affairs independently with no influence from third parties.

The suspension comes on the heels of a warning letter sent to Nigerian officials from FIFA after the NFF committee was served with court proceedings and an order preventing the NFF, its committee and its congress from handling affairs of Nigerian Football. This order was granted by the High Court of the Federal Republic of Nigeria. FIFA will lift the suspension once the court actions have been retracted and the committee, congress and executive has been restored and allowed to work without any outside interference.

Who exactly does the suspension affect? As FIFA states, "As a result of this decision, no team from Nigeria of any sort (including clubs) can have any international sporting contact (art. 14 par. 3 of the FIFA Statutes). During the period of suspension, the NFF may not be represented in any regional, continental or international competitions, including at club level, or in friendly matches. The most immediate effect is that Nigeria will not be entitled to participate in the upcoming FIFA U-20 Women's World Cup (5-24 August 2014) should the suspension not be lifted by 15 July 2014. "

This is not the first time that FIFA has warned Nigeria over government interference. In 2010, the same type of events took place with the government attempting to sack the NFF and having to withdraw after another FIFA warning.

The current NFF executive committee's four-year tenure was due to run out at the end of August, which makes the timing of the dissolution more odd than it already is. To make the story even more confusing, the "interlocutory injunction" which barred NFF boss Aminu Maigari and his people from handling football affairs was taken out by Ebiakpo Rumson Baribote, who is the owner of Nembe City FC, a local football team.

To add to the growing mountain of strange happenings, Maigari was recently arrested by the State Security Service on his arrival to Abuja (he has since been released). Many of the executive committee members have stated that they do not plan to return to Nigeria while this situation is ongoing. Adidas has also backed out of its endorsement deal with Nigeria. 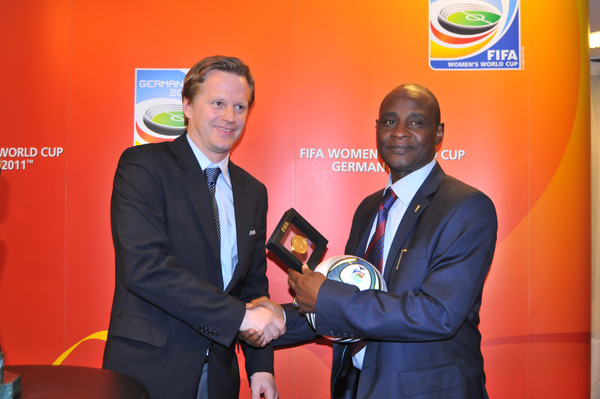 The reasons given for the swift and decisive deconstruction of the NFF was, as stated by Obinna Ogba, "for selfish management of funds, manipulation of NFF's regulations and poor handling of Super Eagles' bonus row in Brazil." Maigari is accused of embarrassing the nation by failing to pay the players their bonuses during the World Cup, an event that led to the players refusing to train in protest, before losing to France in the Round of 16. He is also accused of abusing the NFF statues by altering the list of persons approved by the congress at the 2013 general assembly.

Maigari's tenure has been plagued by suspicions of corruption and money laundering. It is the same issues and concerns that were at the forefront for the attempted dissolution in 2010, with Maigari and his officials reportedly rewarding themselves with large bonuses that ranged from $10,000 to $50,000. The incident that sparked his recent arrest was his 'loss' of $90,000 that was meant for the U-20 team -- while his airplane was still in midair. While one might think that as extremely suspicious, the movie Airplane v. Volcano clearly shows that the airspace is a dangerous place to be. The money could have become sentient while in mid-air, and in search for a higher meaning than just serving the whims of its users, jumped out of the plane, never to be seen or heard from again. These things happen. Nigeria should be more understanding.

All of these executives and their associations have not only been accused of match-fixing but also of being magicians, with the ability to make cash meant for the players and teams disappear.

Aminu Maigari is a FIFA-appointed executive. So, too, is Joseph Owona of the Indomitable Lions, who was put in place after Cameroon, too, found themselves banned for government interference. Kwesi Nyantakyi, the current president of the Ghana Football Association, is also a member of FIFA's Associations Committee. All of these executives and their associations have not only been accused of match-fixing but also of being magicians, with the ability to make cash meant for the players and teams disappear. It wasn't long ago that Kevin-Prince Boateng was sent home from the World Cup for questioning why Kwesi and his people were able to fly first class and live lavishly while the players flew economy and slept in flooded hotels.

Given the alleged corruption of the NFF, it's small wonder that the Nigerian government chose to violate FIFA rules against government interference. But FIFA's response is no surprise either -- Aminu, who they had appointed, must be restored to power, or there'll be no football for the Super Eagles.

Nigeria is being forced to stomach a situation that seems intolerable. Though the courts could have waited for August for Aminu to leave office, FIFA would presumably have elected another one of their own into office again, hardly a recipe for a general clean-up. Nigeria now has a decision to make between two unpleasant choices: either reinstate a man who can't (or doesn't) keep track of $3.2 million due to senior players and $90,000 due to U-20s while on a plane, or to face eviction from the global footballing community. Somewhere Sepp Blatter is in dark shades telling Nigerians: traiter avec elle.