This World Cup was the most fun ever

The World Cup is the vehicle for the best that humanity can deliver in drama, emotion and fun, and this one delivered beyond our wildest dreams.

Share All sharing options for: This World Cup was the most fun ever

World Cups are special. They come around once every four years and while the world may not stop, as some like to suggest, it certainly slows. They make friends of sworn enemies, enemies of one-time friends. Legends are born and so are villains. They are time markers by which millions measure their lives. World Cups should be appreciated and treasured, and none more so than the 2014 edition.

This World Cup was everything we wanted from the tournament that we love so much. Its best goals were spectacular and its stars shone bright. New heroes were born and there were upsets aplenty. Goals came in abundance and the drama of the finish was unparalleled. It brought people to untold joy and left entire nations in tears. And all of this happened in the bastion of the sport, in rainforests and on beaches, in front of some of the world's most fervent fans, who provided a breathtaking soundtrack to the setting its country already aced.

More than anything, the World Cup was fun. It was thrilling. It was a blast. And it was the best World Cup ever. 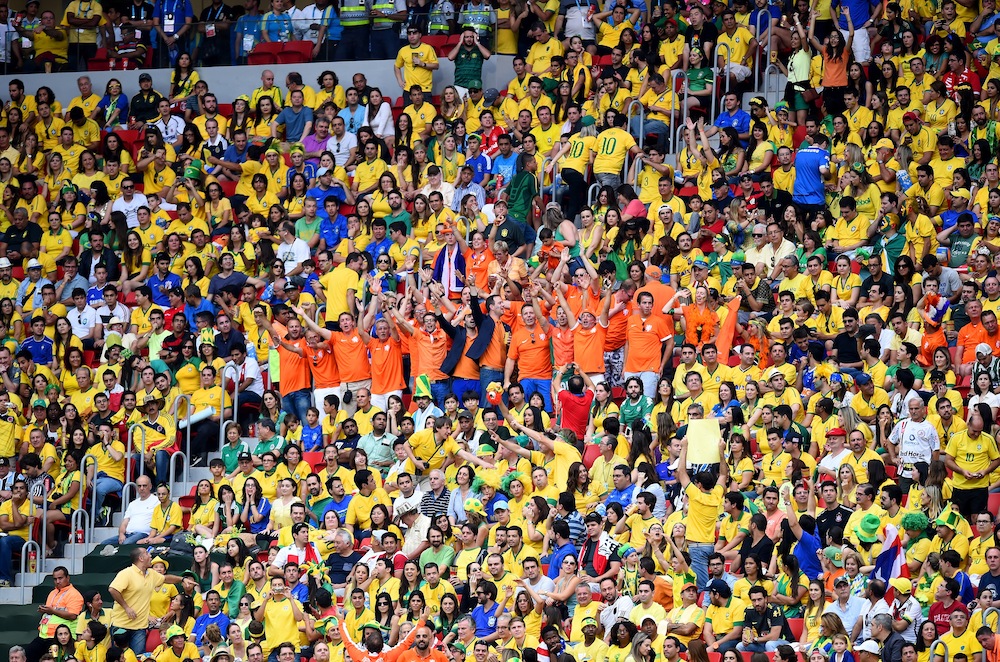 It wasn't supposed to be like this. Yes, it was supposed to be great, but not like this. This World Cup's magnificence was going to come from Brazil and the glow the Seleção emanated. This was a homecoming of sorts for the sport, and a showcase for its most successful team, as well as its next star. It was less a sporting event and more of a parade.

Instead, Neymar went out of the tournament with a fractured vertebra that sent Brazil into mourning, and it was only a taste of what was to come. Four days later their entire world came crashing down. Germany thrashed them, 7-1, and the scoreboard flattened the Seleção. It was a massacre that left the entire country in tears, one match short of the final, and blew up everything this World Cup was expected to be. It was also beautiful.

Brazil's love for the sport and the importance of their team was on display. The tears expressed more than any words could and gave deeper meaning to a tournament that, for nearly a month, has engrossed the entire world. 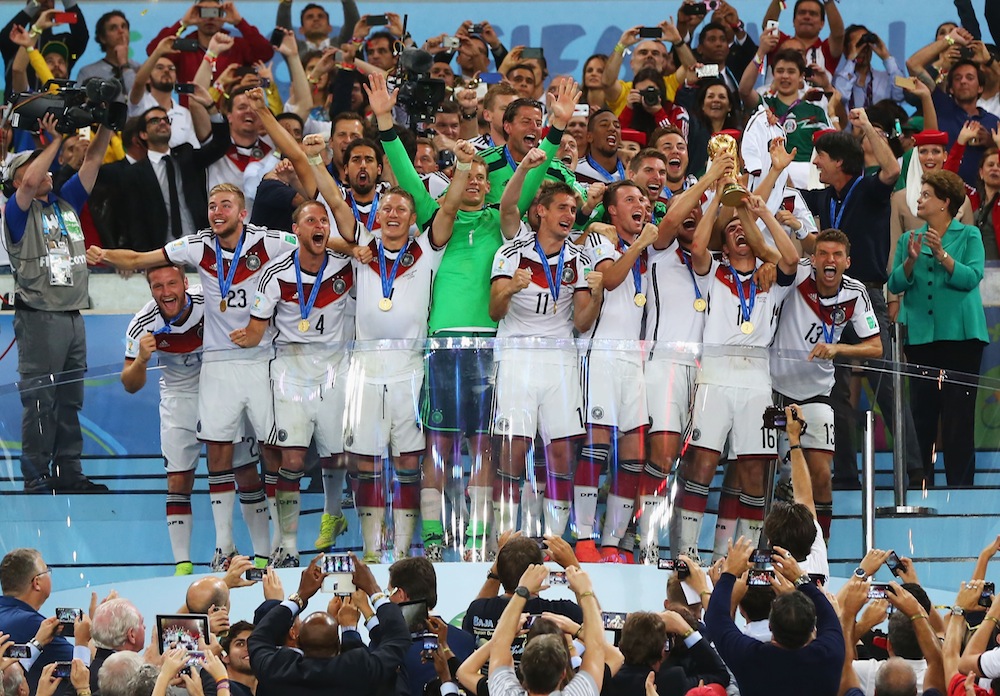 And in that moment Germany finally looked like the best team on earth. They were pegged for world domination four years earlier, but it hadn't come. They had always come up just short, but in Brazil's misery, we saw Die Mannschaft's ascent to the top of the soccer mountain. Five days later, they made it official, winning the World Cup and, despite their robbing Lionel Messi of his crowning moment, it felt right.

The tournament crowned the best team. From destruction came beauty and, more than anything, that is what this World Cup was. It was elegant and beautiful in the most bastardized of ways.

It was clear from the start of the tournament that this World Cup would not be ordinary. Matches were played in jungles, fan fests were held on beaches and favelas cast shadows over every stadium. The opening match was won with a dive, by Fred of all people, but it also saw the crowd belt out one of the most stirring national anthems in the history of the tournament. It saw Brazil's yellow square off against Croatia's checkerboards, and it saw Neymar score a goal that, almost literally, shook cities. The World Cup was 90 minutes old, and there wasn't enough time to cover what we had just seen.

The next day saw Mexico and Cameroon fought to avoid being swept away by a monsoon, but also the first shocking result of the tournament: Netherlands 5, Spain 1.

The rematch of the previous World Cup's final had turned into a demolition, and not the one we expected. It would have been horrifying if it wasn't so mesmerizing. Five days later, we would know that we had witnessed the beginning of the end for Spain, an ugly end for arguably the best team in history. But even that was incredible, and it also served as the Netherlands' notice that they weren't just a team in transition — they were capable of hanging with the world's best, and they did just that for four more weeks.

Robin van Persie scored the goal of the tournament against Spain because he had the audacity to try a flying header for 15 yards. It was reckless and mad, but it worked, and that came to define the tournament. It was how the Dutch sunk Spain and later, it was how Tim Cahill scored a blinder of a volley. It was how John Brooks saved the U.S., Jermaine Jones hit a scorched curler against Portugal and David Luiz hit a knuckler that stunned Colombia. None of it was typical, or really believable, but it came true with the whole world watching.

Oh yes, Colombia, the team that captured the world. The buildup to the tournament was littered with lists of the great players who would miss out through injury, headlined by Radamel Falcao, but one man — all 5'11'' of him, with perfectly coiffed hair and a smile made for television — made us forget. James Rodriguez put a country on his back, and as the world jumped on the Colombia bandwagon, he ended up carrying us all. His passes were sublime, and his goals plentiful. He finished as the Golden Boot winner, none more memorable than his volley against Uruguay that seemed to defy gravity, and when Colombia went out in the quarterfinals, he was heartbroken. But so was the entire planet. In three weeks, he had become everyone's favorite son, not just Colombia's.

James' genius made us wonder when we could watch him next. The tournament was our window to the future and told us what we wanted most out of the next four years, but it also gave us moments we would never forget, because we knew we would never see them again.

We would never again see a nation's self worth disintegrate in 90 minutes or Argentines dance in the waters off Copacabana Beach. We would never see Miroslav Klose in another World Cup or a goalkeeper subbed off before penalty kicks. We would (hopefully) never see a player bite another or (hopefully) a player tear his anus making a tackle. And those are the things we would remember.

By the end of the month, we had forgotten about so many amazing matches. Greece's last-second penalty to get out of the group had fallen by the wayside, as had Uruguay's toppling of Italy with a spot in the knockout stages on the line. Argentina's back and forth with Nigeria was barely a memory, and Germany hanging on against Ghana was an afterthought. Even the Netherlands' miraculous comeback against Mexico and Brazil's penalty kick win over Chile got lost in the slew of terrific matches that ended up numbering too many for us to remember them all.

The World Cup had delivered too much greatness. What amazed us one night was bested the next, and what shocked us had come to make us cheer. Everything we expected had been thrown out, and instead replaced by something better. The ugly moments were beautiful and the whole tournament played out in ways we could never imagine, but yet exactly like we hoped it would.

Nobody watches the World Cup because it is the best soccer they can find. It's not and we know it's not. The sport, as beautiful as it is and as memorable as it can be, is not the draw. The World Cup is the vehicle for the best that humanity can deliver in drama, emotion and fun. And this World Cup delivered beyond our wildest dreams.

The World Cup only comes around every four years. It is unlike anything else on earth and only lasts one precious month. They are all rare and deserve to be treasured, but this one — it was better than any before it. It made you want to hug someone and it made you want to cry. It was special, and it was unique. It was thrilling, and it was intoxicating.

It was the best.