With the stands packed with boisterous supporters and the field filled with world-class players, it's not hard to see where the fledgling league hopes to be heading.

SEATTLE -- Close your eyes and give yourself a moment to imagine the perfect soccer match.

The sun would be out, but the temperature would only be in the 70s. They'd probably be playing on grass, because, well duh, of course they are on grass. This is soccer; we're not barbarians.

The stands would be filled with passionate fans, chanting and singing the entire match. There might be a few f-bombs, but nothing would get out of hand.

There would surely be two rivals on the pitch, each stocked with several world-class players. They'd play an open match with chances coming fast and furious, with a few wild defensive plays and hard tackles thrown in just to get the blood boiling a bit.

"What an advert it would have been for the league." - Laura Harvey, Reign head coach

In this little fantasy, the game-winner would probably take its time in arriving. It would come late, and send the fans into a wild celebration.

Basically, we've just daydreamed our way to Sunday's match between the Seattle Reign and the Portland Thorns. Well, except for the bit about the grass and the late winner; teams in the Pacific Northwest don't really do the whole grass thing and the Reign throttled the defending NWSL champions 5-0.

"I actually thought to myself around the 80th minute what a shame it wasn't on TV," an absolutely beaming Reign head coach Laura Harvey said during the post-game press conference. "What an advert it would have been for the league. Not just because we won, but I think the football that was played -- and [the Thorns] try to play too so it adds even more zest to it a little bit. My phone is absolutely crazy because people back home are just ‘that was unbelievable.' It shows people are interested."

That's especially true in the Pacific Northwest. The crowd of 5,976 at Memorial Stadium was the largest crowd to ever watch women's pro soccer in Seattle and put the Reign on pace to improve on last year's attendance by 70 percent.

Down the road in Portland, they are averaging crowds of more than 12,000 and forcing many to re-think the assumption that women's soccer needs to be marketed almost exclusively to a family-friendly audience.

About 200 of those fans made the roughly 170-mile trek north to support the Thorns. They brought their trademark songs -- four-letter words and all -- and were in full voice even before the opening whistle.

What the Reign fans lacked in coordinated chants, they at least made up for with loud and engaged cheers.

It was a setting befitting of what NWSL organizers had always envisioned when they gave Portland and Seattle their first professional women's soccer teams ahead of last season.

"It's brilliant," Reign midfielder Megan Rapinoe said. "We haven't quite built that up around the league, it's only been two years. [The Seattle-Portland rivalry] is kind of a built-in thing, you could kinda feel it just walking into the stadium earlier during warmups, you could feel that angst in the air. It puts so much more on the game, in those derby-type situations. I love that, I think it's great." 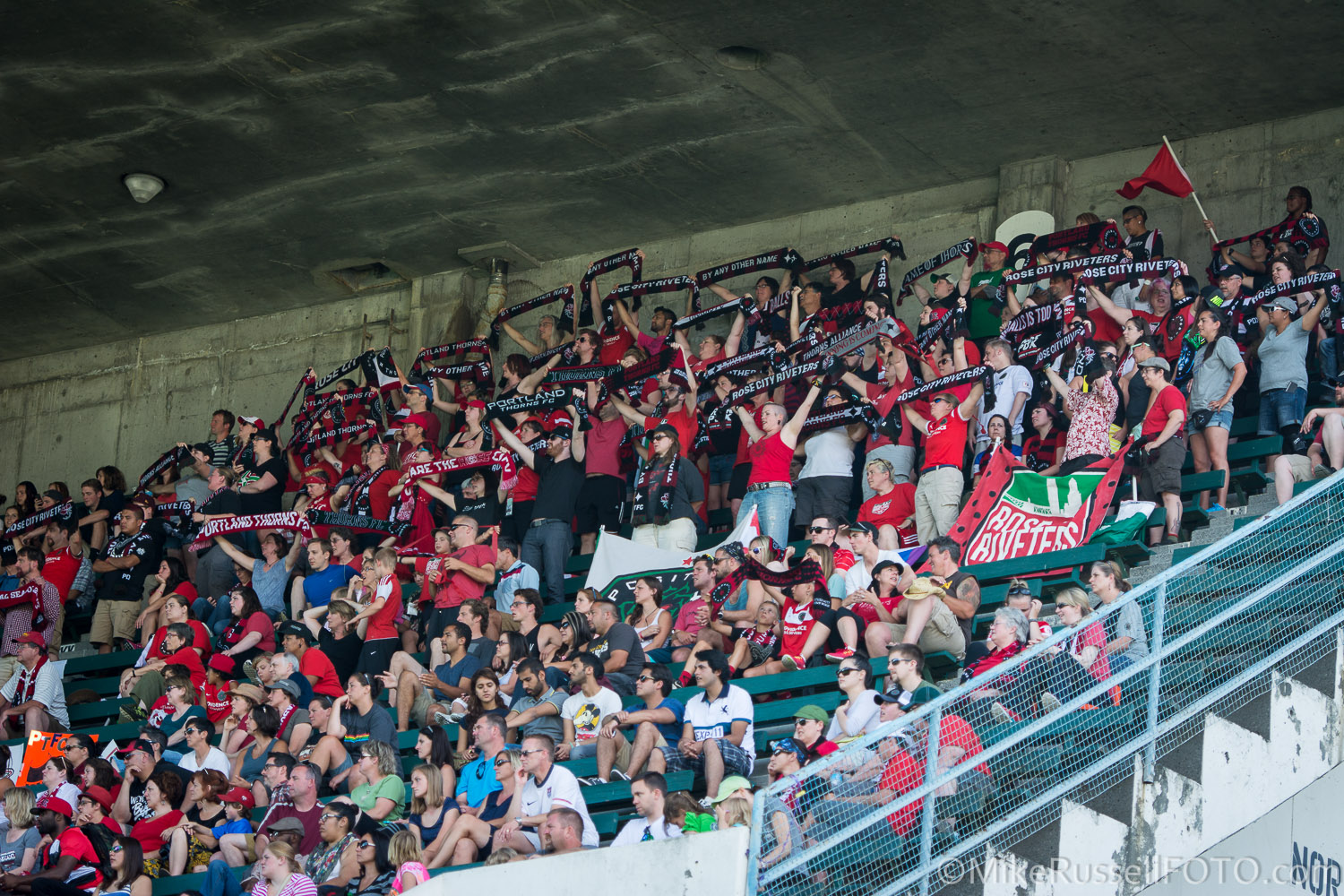 While most will probably agree that spectacles like Sunday's Cascadia clash are a net positive for the league, no other teams have come particularly close to really mimicking it. There are no other rivalries that generate near the interest of Portland-Seattle and most teams are plugging along with crowds in the 3,000-a-game range.

League-wide, attendance is actually down from the inaugural season as six of the eight original teams have seen their numbers decline. In some cases, those declines have been significant; FC Kansas City is down 56 percent and Western New York is off last year's mark by 32 percent.

No one seems particularly worried that the league's future is in any kind of immediate peril, but there's a very real sense that this year has not been as much of a step forward as some would have liked.

"I think there are positives, certainly," Thorns owner Merritt Paulson told SB Nation. "The quality of play continues to be pretty even and pretty good. You've got some improvements at the gate, like the Reign. But to be candid I had hoped for more of a surge and local traction in some markets. It continues to be tough for some teams to generate interest at the game. That's one thing we have to continue to improve upon.

"There's reason for optimism but we also have to be vigilant on the nuts-and-bolts, sports management 101 side."

Paulson is well aware the Thorns had a significant built-in advantage of having the existing infrastructure of Major League Soccer's Portland Timbers. Not only did that give them a stadium, but they had a staff ready to hit the ground running. The Houston Dash have been able to leverage a similar economy of scale with the Houston Dynamo.

"There's certainly a future of the NWSL with independent owner-operators," Paulson said. "A lot of these people are the same ones who slogged it out since the beginning [with the now defunct WUSA and WPS]. It's really admirable. But I think for the league to be successful it needs to become more intertwined with MLS owner-operators or even NASL or USL. It doesn't have to be MLS, but having that infrastructure is really important and helpful."

Even Reign owner Bill Predmore, who is one of those independents, sees the benefits. He has been open about some of the growing pains his team faced in attempting to start from scratch only months before taking the field last year.

He's also bullish on his ability make the Reign sustainable, regardless of outside help. The league's structure, which relies heavily on receiving subsidized players from the United States and Canada national teams, helps limit individual teams' financial exposure. That has allowed owners liked Predmore to put most of his energy into figuring out things other than player costs. 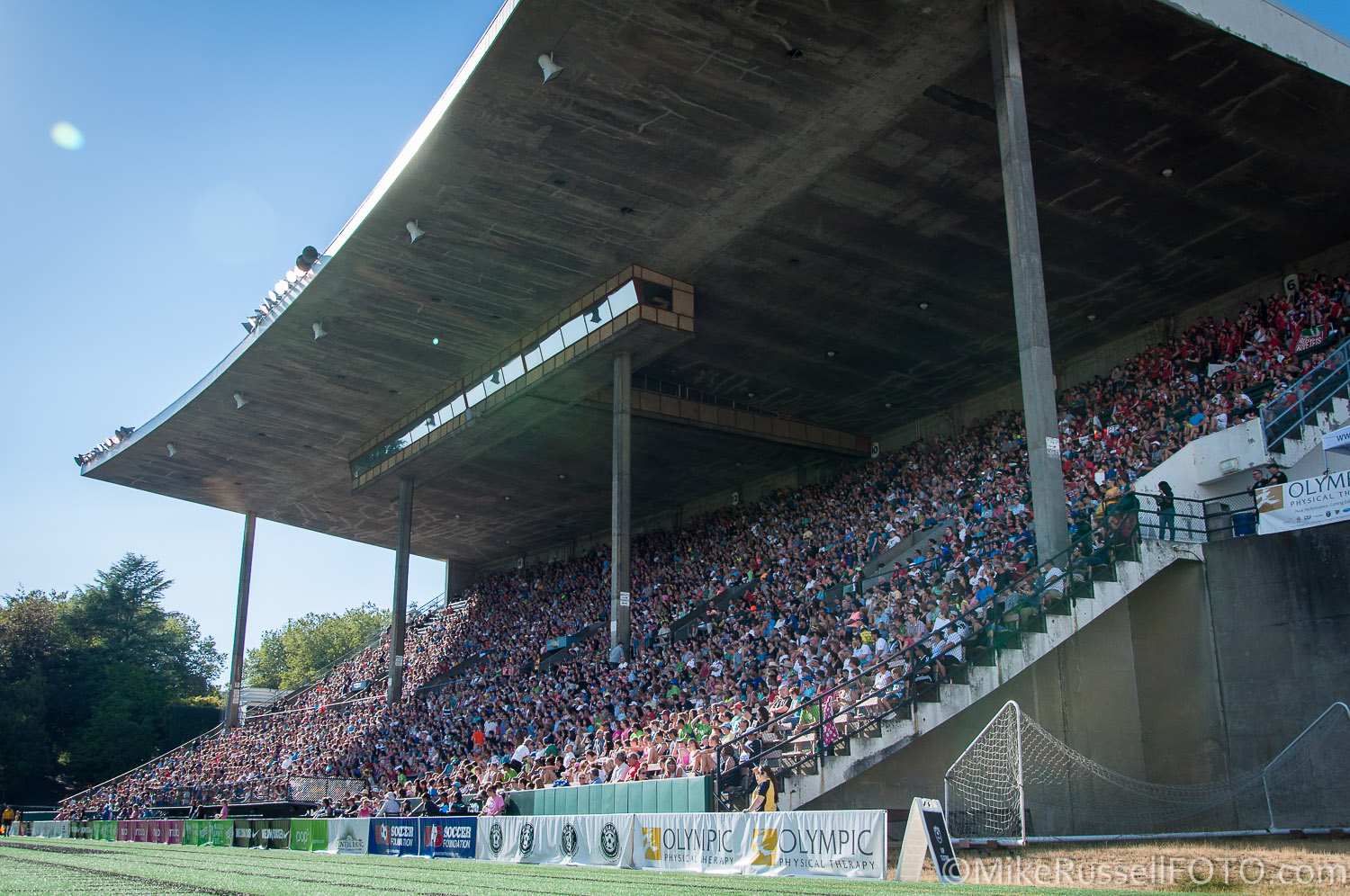 Predmore is not your average NWSL owner, though. At home games, he can be found standing atop the dugout behind the Reign's bench. He'll pace the area, yell encouragement and even exchange thoughts with Harvey. He's also very hands-on when it comes to running the team, working closely with Harvey on virtually all aspects of the club, including on transactions. It's very much a start-up mentality, with the organization's fortunes heavily reliant upon the skills and efforts of a talented few.

By all appearances, his involvement is welcomed and even encouraged by Harvey.

Together, they've compiled a team that features an impressive depth of talent and is running away with the regular-season title in a league that is supposedly built on parity. The Reign are 14-1-4 and feature a roster that could send as many as eight players to next summer's Women's World Cup.

Many of those potential World Cup stars played leading roles against a Thorns team that could be equally well represented in Canada 2015.

Sydney Leroux got the afternoon started by using her speed to burst toward the endline and somehow beat reigning FIFA Women's Player of the Year Nadine Angerer at the near post to give the Reign a 1-0 lead in the 3rd minute.

Two more potential World Cup participants Kim Little and Nahomi Kawasumi combined on a goal later in the half to send the Reign into the locker room leading 2-0. They'd combine again shortly after halftime to make it 3-0.

Rapinoe, who's still working back into form after suffering a couple of injuries, came into the match in the second half and almost immediately scored off a header from a Kawasumi cross to make it 4-0. Little closed out the scoring with a stoppage-time strike after fighting off a trio of defenders in the penalty area.

"They showed tonight why they are the best team in the league," Thorns coach Paul Riley told reporters after the match. "I've seen the last few games and [the Reign] looked a little disjointed and a bit tired. But they weren't tired tonight. They were waiting for Portland Thorns to come in this week, that's for sure." 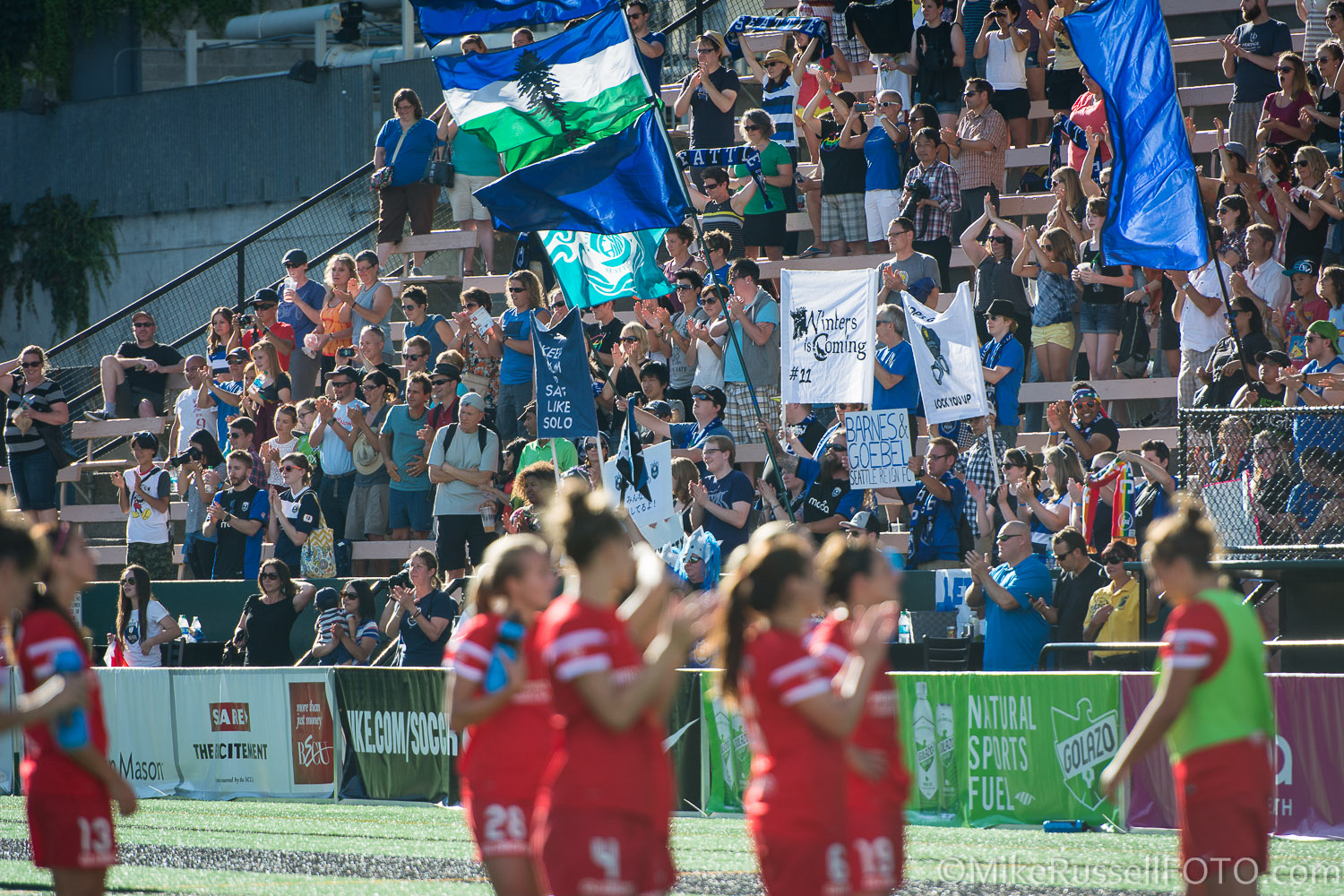 Following the match, the Reign players gathered at the center of the pitch. Every single one was smiling and laughing, almost giggling in disbelief over what they had just done. The reigning league champions had paid them a visit and been sent home 5-0 losers.

They looked into the crowd and saw hundreds of fans still in the stands, wanting to show their appreciation for what has to be the biggest win in the franchise's young history.

If you allowed yourself a chance, you could picture similar scenes popping up around the league. Not today, not tomorrow, but hopefully someday.

"The bigger the atmosphere around the game and the more meaning it has on the game, the better for me," Rapinoe said. "I think it's definitely a snapshot of what it could be and hopefully what it's building to be."