France vs. Germany, 2014 World Cup preview: Giants face off in the Maracanã

Two footballing superpowers clash over a spot in the World Cup semifinals on Friday.

Share All sharing options for: France vs. Germany, 2014 World Cup preview: Giants face off in the Maracanã

France and Germany are both among the eight sides to have previously won the World Cup, with Les Bleus having swept up their only title on home soil back in 1998, and Die Mannschaft having collected the last of their three wins in Italy eight years prior. Historically and presently, they're both superpowers of international football. They do battle again on Friday, over a place in the World Cup semifinals.

They're both exceptionally strong teams, and it's easy to envisage either side going on to lift the trophy in the Maracanã in less than two weeks time. Predicting a winner of their quarterfinal is nigh-on impossible. Germany are possibly at a slight fitness disadvantage after they required extra time to squeeze past Algeria in the last round, though the depth in their squad and fitness of their players means it may not play too big a factor. A very tight game seems in the offing.

Remember when Germany were the most entertaining young team in the world? So much for that.

France's only injury doubt is their centre-back Mamadou Sakho, who was only fit enough to make the bench in their narrow round of 16 win over Nigeria. He was replaced at the back by Laurent Koscielny, though could return alongside Raphaël Varane against Germany. Elsewhere, coach Didier Deschamps may opt to start Antoine Griezmann up top in place of the ineffectual Olivier Giroud.

Germany will certainly be without defender Shkodran Mustafi after his tournament came to an end with a torn thigh muscle against Algeria, though Mats Hummels should be back to fill his place after recovering from flu. Rotation attacker Lukas Podolski will likely be fit to make the bench after a slight muscular pull. 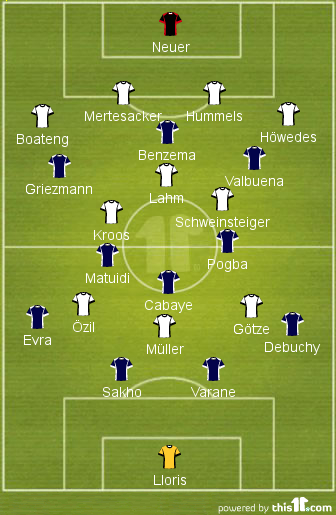 Will France start with Olivier Giroud or Antoine Griezmann? - France coach Didier Deschamps surprisingly opted to start centre-forward Olivier Giroud over winger Antoine Griezmann in their round of 16 clash with Nigeria, in a move that forced the natural central striker Karim Benzema into an unfamiliar position on the left wing. The switch totally backfired, with France struggling to create anything in the final third, and Giroud barely managing to get into the game at all.

Griezmann's introduction in place of Giroud in the second half was a total gamechanger. It meant Les Bleus had much more mobility and creativity in the final third, and it enabled Benzema to play in his usual role at the centre of the attacking trident. The duo linked excellently, and it was no coincidence France proceeded to dominate the final 20 minutes of what had been an even game. Surely in this game Deschamps will opt to play Griezmann from the start.

To press or not to press? - France's approach against Nigeria was a pretty defensive one, though it wasn't without logic. Despite having much better players, Deschamps ordered his team to sit very deep and allow the Super Eagles to dictate possession, presumably in order to nullify their pacey counter-attacking threat in the wide areas. By denying Nigeria the space in behind, they forced them to play in front of the defence, and it largely succeeded.

However, against Germany it may well be that France do try to win the ball back higher up the pitch, knowing that Die Mannschaft are a lot less direct and reliant on quick wing-play than Nigeria. Germany would probably rather be allowed to dictate the tempo of the game and dominate possession, allowing the fluidity of their forward players to draw defenders from deep positions. A high press would prevent them doing this, as well as put an unconvincing back four under pressure to force mistakes and long passes.

Thomas Müller vs. France's centre-backs - There's no doubt that the star of Germany's tournament so far has been striker Thomas Müller, who has demonstrated his extraordinary array of talents en route to bagging four goals in as many games. He's excelled in the centre of Die Mannschaft's attack, where he can not only score goals with his surprising, Miroslav Klose-esque predatory instinct, but also drift out to the flanks or drop deep to assist other teammates. He's a brilliant attacking all-rounder, and France's defence will have to be sure to keep him quiet.

These sides are nigh-on inseparable in personnel terms, though France have just been a tiny bit more impressive at the World Cup so far. That, combined with the extra minutes in Germany legs, could just give Les Bleus the edge. 1-0 France.