Brazil will have to beat the most entertaining team left in the World Cup if they're to progress into the semifinals.

Share All sharing options for: Brazil vs. Colombia, 2014 World Cup preview: Will fun triumph over functionalism?

Heading into the World Cup, it was Brazil that were expected to dazzle on home turf. Their victory at the Confederations Cup last summer was highly impressive; achieved not so much in typically South American fashion as a European one, based on simply overpowering opponents through tireless pressing and lightning quick passing. However, it's yet to quite come together for the Seleção at the World Cup. The party has been excellent, but the hosts a little off-colour.

Fortunately, their quarterfinal opponents Colombia have stepped up to offer more than enough excitement; providing the Latin flair to counter Brazil's brutal functionalism. So far, they've been richly rewarded. Unlike Brazil, who relied on a traumatic penalty shootout win over Chile to make the quarterfinals, Colombia cruised past (an admittedly much weaker) Uruguay, and look like serious contenders to win the tournament. Heading into Friday's game, it's tough to see Brazil stopping them.

So far Luiz Felipe Scolari has largely resisted the urge to greatly alter his favoured starting lineup, despite Brazil's continued underperformance. The one change he did make against Chile was introducing Fernandinho in place of the ineffectual Paulinho, though the latter will likely return to Scolari's 11 against Colombia in the absence of suspended midfield anchorman Luiz Gustavo.

Neither side is believed to have any injury concerns, meaning Colombia will likely be unchanged from their quarterfinal victory over Uruguay. Jackson Martínez will likely keep his place over Víctor Ibarbo on the left of their attack after impressing in the last couple of matches. 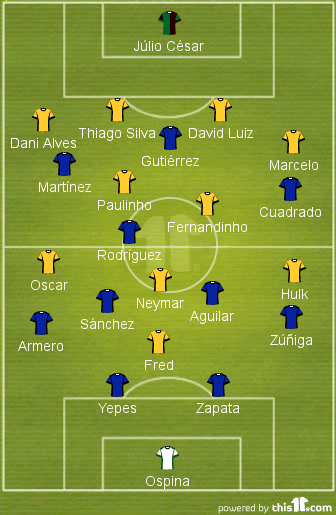 James Rodríguez vs. Luiz Gustavo's replacement - Even if Brazil send Colombia packing in the quarterfinals, it's difficult to imagine anyone snatching the player of the tournament crown from James Rodríguez. The attacking midfielder has been simply unstoppable so far, whether slaloming past defenders, threading in teammates, or volleying the ball into the back of the net from 25 yards. He'll once again be at the heart of all Colombia's attacking play against Brazil, who could well struggle to keep him quiet in the absence of their one true defensive midfielder, Luiz Gustavo.

There are eight teams left at the World Cup, none of which are the United States. Trying to find a team to root for? We can help.

How to watch Brazil vs. Colombia

Brazil faces a tough test from fellow South American side Colombia with a spot in the semifinals on the line. Here's how you can watch.

Root for James, don't root for Germany How to watch Brazil vs. Colombia

Juan Cuadrado vs. Marcelo - Another Colombian star to impress in Brazil has been Juan Cuadrado, who has picked up where he left off at Fiorentina in Serie A with a string of impressive performances down the right flank. His pace, trickery and reliable end-product makes him a perfect modern winger, and one reportedly attracting attention from some of Europe's biggest clubs. He could cause havoc against Brazil, particularly if he can find space in behind their attack-minded left-back Marcelo on the counter.

Neymar vs. Colombia's defence - Brazil as a team haven't lived up to expectations, though Neymar is an exception to the rule. He's coped admirably with the weight of national expectation, and at times has carried the Seleção with sheer individual brilliance. He could well have to do the same against Colombia, particularly if Brazil sit deep and look to hit long passes into the channels as they did against Chile. If he's fit and on form, Los Cafeteros' attacking fullbacks and slow centre-backs will struggle to keep him quiet.

If Brazil continue to look as disjointed and reliant on Neymar as they have at the World Cup so far, they're eventually going to be found out. Coming up against the tournament's best attacker while lacking their midfield anchorman, don't be surprised if they're eliminated by Los Cafeteros. 2-1 Colombia.

Brazil vs. Colombia, 2014 World Cup: Selecao sneak a win, but Neymar is hurt