The camera angle, background, grass and width are all problems.

Share All sharing options for: Soccer at Yankee Stadium doesn't look so hot

Soccer in a baseball stadium is hardly ideal and New York City FC knows that. It's why they are working so hard to get their own stadium built so they don't have to stay at Yankee Stadium for long after their debut there next season, but few could have imagined it would look just as bad on TV as it does.

Manchester City and Liverpool are playing a friendly at Yankee Stadium right now, using a similar set-up to the one NYCFC is planning on, and it looks atrocious on TV.

Camera angles that can't show near the width of the pitch are not good. You can't see anyone's runs and even simple 20-yard passes take the ball out of the screen. The camera angle is way too low to adequately show soccer. 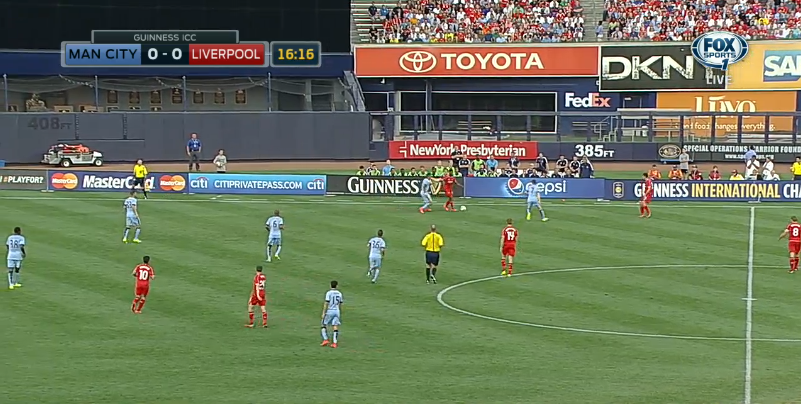 On top of Yankee Stadium's unsuitability for TV, it has a very, very narrow pitch and the grass laid over the infield is terrible, causing every ball over it to bounce high.

This is just a one-time friendly so it's possible that NYCFC has a series of changes -- like a higher camera angle and better grass overlay -- in store for when soccer at Yankee Stadium is a regular home for soccer, but its ugly right now and there are some things that can't be fixed, like the width. NYCFC is still a ways off from getting their own stadium, but if tonight is any indication, they better move quick.