Predicting the rest of the World Cup, through the power of math

The underlying stats have a story to tell about the World Cup up to this point. Some of it fits the conventional wisdom, but some of it doesn't.

Share All sharing options for: Predicting the rest of the World Cup, through the power of math

It's been a difficult World Cup for the favored sides. Even after knockout round in which all eight group winners survived, no team got through without revealing a significant weakness. Brazil drew against Mexico and Chile. Argentina keep doing just barely enough to win. Germany drew against Ghana and went to extra time with Algeria. Spain were eliminated after just two matches. With eight teams remaining and no dominant side revealing themselves, every side except Costa Rica has a legitimate chance to win this.

That said, a wide-open race is not the same as a dead heat. There are some key statistics which can help us distinguish between the sides remaining in the World Cup. In the expected goals model projections for the final eight, while no teams odds are shockingly low (other than Costa Rica's), real separation can be identified. 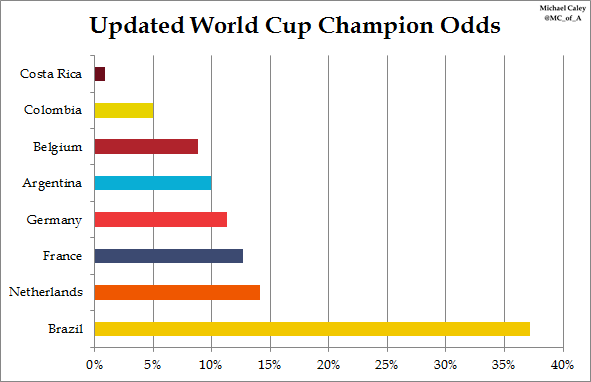 The stats also suggest that Brazil's struggles have been somewhat overstated. In the draw with Chile, Brazil created significantly more good chances, but simply failed to put them away. The following chart shows the shots attempted in Brazil's match with Chile, with the size of the marker proportional to the "expected goals" value of the shot. 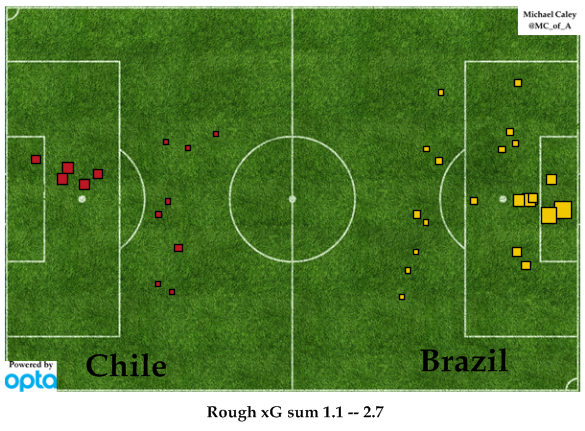 The problem for Brazil is that two of their best chances were scuffed badly by strikers Fred and Jo. One possible problem for Brazil, in relation to expected goals, is the quality of their strikers. Should we expect Brazil to continue to struggle with finishing, even if they are creating superior chances?

We can compare Brazil's recent struggles in finishing with how the Selecao performed in their last competitive tournament, 2013's Confederations Cup. Over matches against Spain, Italy, Uruguay, Mexico and Japan, Brazil actually outperformed expected goals by a wide margin. With basically the same squad, this Brazilian side was clinical in converting its chances. 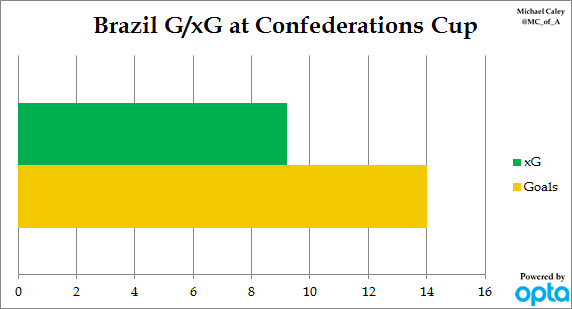 Brazil's run through the Confederations Cup was driven in great part by quality finishing. It is possible that something is suddenly wrong with Brazil, but this short study suggests that it's more likely this has been a small fluke. If Brazil's shooting comes back around, they are probably the best side remaining in the World Cup.

Running in counterpoint to Brazil are their quarterfinal opponents Colombia. Los Cafeteros are yet to be in any significant danger of losing a match. Only once in the World Cup has an opponent even scored an equalizer against Colombia, and after Japan knotted their match at 1-1 Colombia rattled off three goals to win in a blowout.

Under the surface, however, Colombia's performances have appeared more mixed. Japan and Greece in particular struggled badly to convert the chances they created against Colombia. This is fine for a team facing mediocre competition in the group stage. But if a team wants to progress to the semifinals or the finals, hoping your opponents don't score despite giving them a bunch of good chances is not much of a plan.

Now, Colombia's shot chart is somewhat influenced by game states. Up by two goals, teams often sit back and soak up pressure, looking to hit on the counterattack. And Colombia is not terribly likely to grab a two-goal lead against Brazil or the other top teams in the bracket. So the following chart isolates Colombia's group stage performance in just those situations when the game was close. 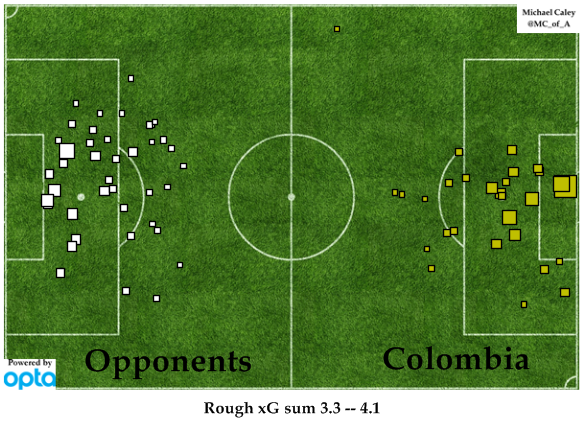 In the group stages, Colombia were running just about even with their opponents in these close game states. The deadeye finishing of James Rodriguez was enough to win these matches, but chances that were spurned by Yoshito Okubo are more likely to be put away by Neymar or Thomas Müller. This is not to say Colombia cannot win this match, but they will likely need a tighter defensive performance to stop Brazil.

France and Germany: A Huge Battle

A football battle, that is. A football match, really. Not some other kind that you might associate with France and Germany.

Both sides have dominated key matches with excellent attacking play, and this should be a fantastic match. Germany's extra-time win against Algeria looks much more like a fluke than any horrible indictment of the team. Germany produced eight big chances in regular time but converted none of them. In the English Premier League last season, only twice did a team create as many as eight non-penalty big chances. The two teams were Liverpool against Tottenham and Southampton against Newcastle. They won these matches by a combined score of 9-0. Germany's attack is still deadly, even if for one night only Thomas Müller forgot his shooting boots.

France's dominance of the group stage extended to the underlying statistics as well. When they went up, they still did not allow their opponents chances to get back into the match. Instead, unlike Colombia's more even shot chart, France's shows consistent dominance. 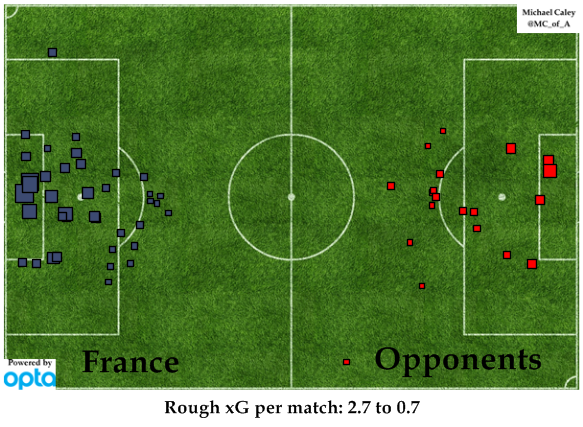 If France and Germany were not squaring off in a quarterfinal, it is likely that one of the two teams would project, statistically, as the second-favorite to lift the Cup. But because one of these two excellent sides will be eliminated today, neither can be a clear favorite. The winner of this match will almost certainly move into second place in the expected goals model projections.

The underlying statistics have been skeptical of Argentina from the beginning of the tournament. Despite amazing attacking talent, Argentina have continued to fail to produce the kind of dominant performances expected of them. The side seems to lack any clear plan to link defense and attack. The most telling stat here is that Argentina has attempted nearly 100 crosses in four matches. There are few methods of attack more effective in lessening the impact of Lionel Messi, but nonetheless this is what Argentina have chosen.

The player most often deputized to link between defense and attack in Alejandro Sabella's system is Angel Di Maria. So far, Di Maria has focused heavily on pinging crosses into the box rather than on creating inside with his speed as he typically does for Real Madrid. 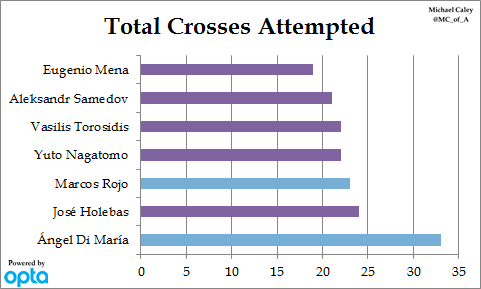 It's not clear why a manager would have a creative attacker like Di Maria focus so heavily on low-expectation crossing passes, especially when the side's best attacking player is not quite a traditional target man center forward. And Di Maria is not the only Argentinian on this list. He's joined by fullback Marcos Rojo. If you're looking for one stat that explains why Argentina have not yet impressed at the World Cup, this is it.

Despite having the brilliance of Messi in the center of the pitch, Argentina's attack has been dependent on playing passes that Messi is unlikely to ever touch. One hopes that Argentina can come up with a new plan and free both Messi and Di Maria to do what they do best. But the expected goals projection model remains skeptical of Argentina because Sabella still has not shown that he can make the best out of the prodigious talent in this team.

With Argentina still in shambles, the Netherlands and Belgium both stand a good chance to reach the final. The two lowland nations have received a much more favorable draw than France or Germany, unless Argentina can sort their problems. While the expected goals model would not favor any of the teams from this side of the bracket against Brazil, France or Germany, their much easier road to the final inflates their odds of winning.

This has the potential to be a truly great World Cup if the big matches today and tomorrow can deliver. These sides have the ability to put on a show. We hope they do.