Injured Colombian star Radamel Falcao was not pleased with the referee after his team's loss against Brazil.

Radamel Falcao wasn't able to play at the 2014 World Cup as he continues to rehab an injured knee. That didn't stop him using Twitter to complain about the referee from Colombia's loss against Brazil on Friday.

Roughly translated it says, "For the next game remember to call the ref, he did not come today".

Just in case he, or someone else, deletes the tweet, here's a screen cap. 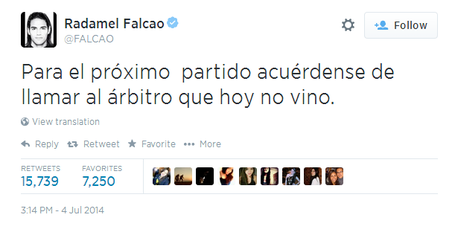 Brazil vs. Colombia, 2014 World Cup: Selecao sneak a win, but Neymar is hurt