Share All sharing options for: Liverpool's 2014/15 third kit is the most Warrior kit to ever Warrior

American sports brand Warrior have been making Liverpool's kits and training gear for the last few seasons. In that time, they've shown that they can create stuff that looks sensational with contemporary designs that are inspired by past kits. They have also shown us some real eyesores and stuff out of horror movies. Liverpool's new third kit unfortunately falls into the latter category. 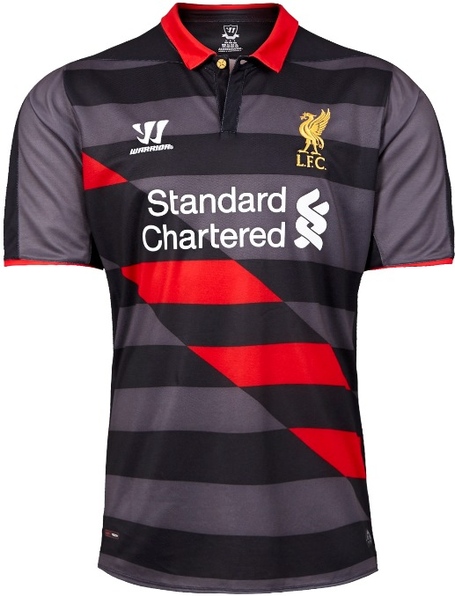 The new home kit is (mostly) gray with black horizontal stripes that run all the way down from the shoulders to just above the hem, with an elongated break to accompany the club's Standard Chartered sponsor logo. If that wasn't enough though, the shirt also features an oddly-angled sash in a bright red color that alternates with black stripes where the sash meets gray.

On top of that, the sash also starts at the elongated break, removing any sense of balance that might have been there. The shirt is accented (and I'm not sure if you can even say that because the whole thing is one giant accent) with red trip on the sleeve cuffs and a bright red polo collar with a gold badge on the chest. The sleeves also feature stripes but they run vertically instead of horizontally.

The kit is completed by black shorts and black socks in what is a sensible move in an otherwise ridiculous thing.

Former Liverpool player Luis Garcia, who scored a number of notable goals for the Reds on their way to a Champions League final win in Istanbul back in 2005, spoke about the new kit with the club's official website. This was probably done after being threatened with the prospect of a photo shoot in it:

"I love the way this shirt looks. The red collar on the black shirt gives it a very stylish look and as always, Warrior has incorporated the best material and details to keep players comfortable whilst playing." 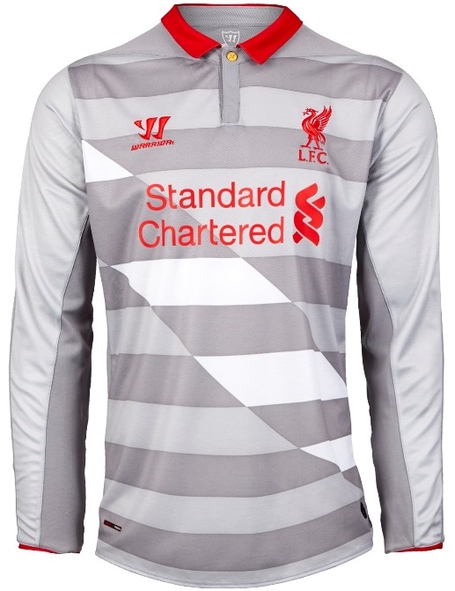 The goalkeeper's third kit is the same template but looks way, way better. It alternates between light and slightly darker gray with a red collar and accents. The sash on the keeper kit however alternates from that darker gray to white for Warrior reasons. The goalkeeper's kit comes with gray shorts and socks.

As someone with eyes, it is very difficult to see the kit's appeal so the question must be asked: why, Warrior?