Netherlands vs. Argentina, 2014 World Cup preview: A clash of counter-attackers

With a win Wednesday, the Netherlands would advance into their second consecutive World Cup Final.

Share All sharing options for: Netherlands vs. Argentina, 2014 World Cup preview: A clash of counter-attackers

On Wednesday the second World Cup finalist will be decided, with Netherlands and Argentina going head to head over a chance to play Germany for football's biggest prize. For the Oranje, the semifinal will be a fairly familiar scenario, as they finished as runners-up to Spain in South Africa in 2010. Argentina, however, haven't made it into the final four of a World Cup since they were beaten finalists in 1990.

Peculiarly, these sides have ground their way to the semis without having actually played very well. The Netherlands were excellent in the group stages, but have been significantly less convincing against more defensive sides in the knockouts. Argentina, meanwhile, had a close shave against Switzerland in the round of 16, and haven't won a single match by more than a goal so far.

The World Cup's most dangerous player

Even when Lionel Messi's having a relatively quiet game, he's out there, waiting to pounce. Be afraid, Netherlands.

The World Cup's most dangerous player

The Netherlands will certainly be without injured midfielder Nigel de Jong, while Leroy Fer and Ron Vlaar both face late fitness tests. Jonathan de Guzmán could come into the midfield in place of winger Memphis Depay, with Louis van Gaal likely to look for a little more midfield muscle in order to try and counter the threat of Argentina's main man Lionel Messi.

Argentina will be without injured midfielder Ángel Di María, with the more defensive-minded Enzo Pérez likely to fill his role alongside Javier Mascherano and Fernando Gago. Sergio Agüero has made a quick recovery from his group stage muscular injury and could well feature in this match, though it's unlikely he'll displace Ezequiel Lavezzi for a starting spot. He was previously thought to be out for the rest of the tournament. 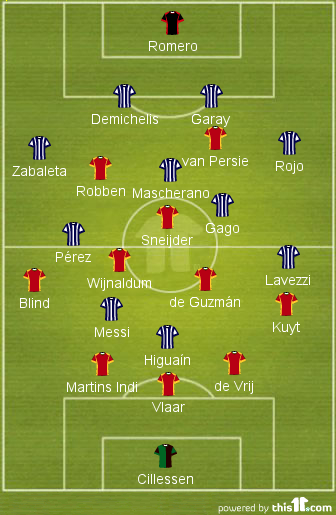 The possession battle - Argentina's best chance of winning this match will come if they play as they did against Belgium, where they sat back and used the pace of their forwards and ingenuity of Lionel Messi on the break. If there's one thing the Netherlands' quarterfinal against Costa Rica showed, it was that they're actually pretty average in possession, and are really only at their most potent when they can use Arjen Robben's pace to burst in behind high defensive lines. If Argentina sit deep, they'll be able to stifle the Oranje.

Lionel Messi vs. the Netherlands' central midfielders - Against Costa Rica, Louis van Gaal gambled on playing an extremely flimsy central midfield, with attacking midfielder Wesley Sneijder partnered with natural winger Georginio Wijnaldum through the middle. Costa Rica's lack of a central threat made this less problematic than it should have been, though if van Gaal plays the same side against Argentina, he will surely be punished by Argentina's main creative force, Messi. It's here where the inclusion of a more natural central midfielder in Jonathan de Guzmán would come in handy, and where the absence of anchorman Nigel de Jong could prove costly.

Arjen Robben vs. Argentina's centre-backs - Even if Argentina sit deep and deny Robben the space to use his pace to full effect, his exceptional close control means he'll still be a direct threat to the Albiceleste centre-backs and the slow Martín Demichelis in particular. It wouldn't be all too surprising to see Federico Fernández drafted back into the defencs alongside Ezequiel Garay for this very reason. If Argentina can keep Robben quiet, then they may well keep the Netherlands quiet altogether.

If Argentina sit back and force the Netherlands onto the front foot, they'll no doubt be able to find joy on the counter-attack through Lionel Messi, even in the absence of Ángel di María. This could be the match the Oranje are finally found out. 2-1 Argentina.

Netherlands vs. Argentina, 2014 World Cup: Albiceleste sneak through on penalties