Liverpool, Arsenal, Manchester City and more are all interested in the prolific Lyon goalscorer.

Share All sharing options for: Why Alexandre Lacazette is one of the most sought-after players in the transfer market

This is not how it was supposed to be. PSG, though slightly hobbled by Fifa’s "Financial Fair Play" laws, had just signed David Luiz, and were set to continue their journey to single-handedly raise the tides of French football. Lyon’s dynastic run of 7 titles was a thing of the past, a relic of a league that now served as a sort of AAAA farm system for the likes of Arsenal and Real Madrid. The success of those Lyon teams was a testament to Ligue 1’s status as second rate: Dominance in the league, yet hitting a ceiling in the Champions League against Europe’s true elite. Previews declaimed that this year’s Ligue 1 was "Over Before It Started".

But then Zlatan Ibrahimovic gained a limp, no longer able to shoulder the bloated salaries of PSG on his own. Into the title race marched Marseille and Lyon, the old guard of the league’s past. Not that they were waiting for the Zlatan to invite them in. Alexandre Lacazette, Lyon’s 23-year-old bull, was running head-on towards the door, ready to barrel it down and whatever mystery stood behind.

Who is this guy, anyway?

21 in 22. That’s what you need to know about Alexandre Lacazette. 22 games into Ligue 1, Lacazette has 21 goals, and Lyon are top of the table. They’ve got their swagger back, and then some. Anyone watching this scorching run would be tempted to try and poke holes in his game. A ball falls fortuitously to him at the edge of the box, which he efficiently dispenses in the back of the net: he’s a poacher. A penalty calmly converted into the upper 90 of the net: his numbers are inflated. A header off a corner: he gets great service. But over time, this "luck", this "service", this "poaching" becomes the simple fact that he is a goalscorer. After all, not skying balls from the 6 into the stands, converting penalties, and scoring when he is "supposed to" is the kind of consistency almost any squad would pay for.

Even with such consistency, all those goals scored, Lacazette's skillset is broader. He is the centerpiece of Lyon’s attack, and all movement, all threat, comes through his boots. A typical Lyon break involves Lacazette dropping deep into the midfield, linking up with a recessed winger or defender for a quick one-two to begin the break. After his first touch he is off - sprinting up field to link up with forward counterpart Nabil Fekir or his winger again, for another one-two to break the ball into the attacking third. Two Lacazette touches and nine seconds later, Lyon are breaking into the eighteen-yard box.

With a deft touch and blazing speed, comparisons to Thierry Henry beckon. Lacazette himself stated that a conversation with Henry in 2013 proved hugely influential in his game. Both men use their experience out wide to complement their success as converted strikers. Angling in from the sides, they shift the field of attack. But if Henry was Baryshnikov, gliding across the pitch with sinful fluidity, Lacazette is Walter Payton. A rougher and more physical version of Henry, with the ability to dance and glide in similar ways. But Lacazette’s physicality allows him to double as a holding forward, able to fend off opponents as Yoann Gourcuff and the rest of the cavalry catch up to fill the void.

A 1-0 victory against Marseille demonstrated that this Lyon team were for real. Lacazette was dutifully contained for much of the game, yet managed to create the lone goal. Drifting to the left wing, Lacazette collected a pass while holding off a Marseille defender, and, turning, had the rest of the field in his view. This drew the attention of the entire Marseille backline, who left an ocean of space behind while rushing toward Lacazette. Gourcuff then had no trouble receiving the pass and putting the ball in the back of the net. Yes, Lacazette necessitates enough of an opponent’s resources that his mere presence on the field can be as much of a game-changer as his goals. 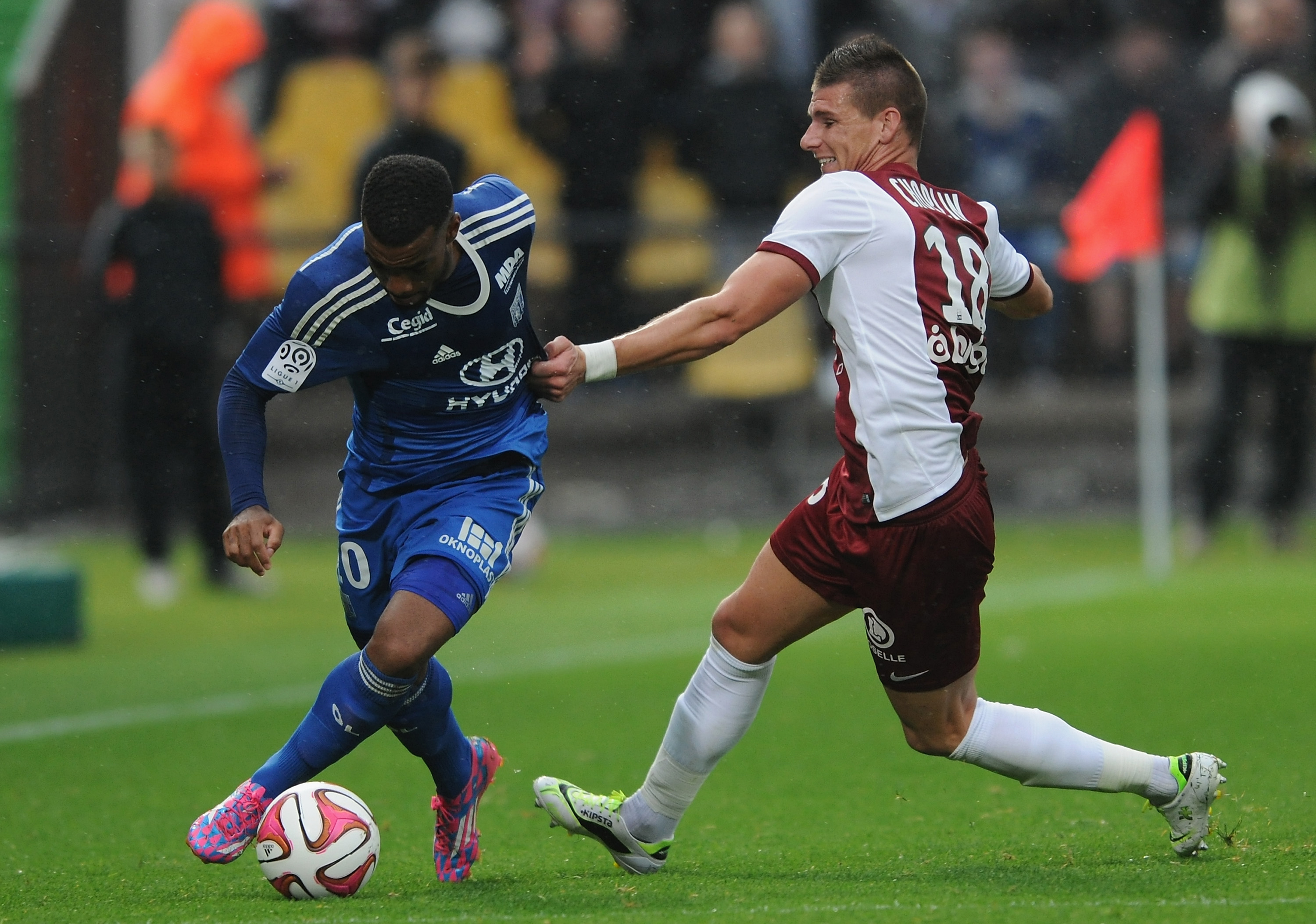 Lacazette has looked unstoppable in Ligue 1. Even in his quieter matches, all it takes is a moment for him to ruin the opposition's plan. But this is still Ligue 1. Against sides like PSG, Lacazette has managed to threaten, but looked distinctly human. Could he flourish in the more physical and demanding Premier League? Or will he join the vast graveyard of continental strikers who just couldn’t make the cut?

It'll likely depend on how well he fits into his future side. Liverpool have been making the loudest noises, wanting Lacazette to replace the gaping hole that Luis Suárez left at Anfield. Arsenal, too, have stated interest, and given the Henry comparisons they'd no doubt would appreciate his presence. Manchester City’s endless coffers may also come into play, particularly considering their recent form and rash of injuries to forwards.

So how will he fit?

Liverpool: Lacazette makes the mercurial Mario Balotelli dispensable, with comparable talent yet lacking the Italian's inconsistency. Liverpool are still adjusting to the 3-4-2-1 that Brendan Rodgers credits with improving the side's play, but Lacazette could fit nicely in this system, possibly edging out the also-inconsistent Coutinho. Once the Frenchman adjusts, he would not only have the Kop in a state of ecstasy, but allow Liverpool to challenge for the fourth and final champions league spot.

Arsenal: Like a painter who needs to pay rent, artistic compromises have to be made. For Arsenal that means learning to sit back and let the game come to them. It might not be the haute football of lore, but beating City 2-0 at the Etihad shows just how necessary a weapon this style is. Arsène Wenger could deploy Lacazette at the top of a 4-1-4-1, adding a much-needed additional option in attack. But if Wenger wanted to field both Lacazette and Olivier Giroud, it's likely the former would need to be shunted out wide once more.

Enjoying the unlikely marriage of Bojan and Stoke

He's not going to win the Premier League, but Bojan's rebirth at Stoke is one of the stories of the season.

Riquelme was whatever you want him to be

He was the greatest entertainer of all time, or a choke artist, or a Boca Juniors legend.

Manchester City: Water is wet, cats like yarn, and City love spending bundles of money on prolifically talented (and, to be honest, some not-so-talented) players. This season saw them so depleted of firepower up top that Manuel Pellegrini broke out an efficient (and victorious) 4-6-0 formation. But City want forwards and they want those forwards to perform. Sergio Agüero might be back, but he's also more fragile than glass, and new signing Wilfried Bony can't carry the scoring burden alone. Lacazette could potentially feature up top, lightening the load on Kun, or be deployed from the flanks of a 4-2-3-1.

Would he even leave?

Good question! Lacazette very well might not. Lyon are relishing their return to power and potential qualification for the Champions League group stage. Club president Jean-Michel Aulas has said that Lacazette is even better than Gareth Bale, so there’s not even a price he’d be willing to listen to in order to sell. That’s a cute story, and might actually hold true through January. But when the summer arrives and the money comes knocking, we’ll see if Aulas remains coy. One would imagine he just might be willing to listen. Sooner or later, someone's going to be willing to offer him way more than €1M per year. Truthfully, only injury could manage to slow this potential superstar down.