It may not be as obvious on the pitch, but English football still has a massive problem with diversity in positions of power.

Share All sharing options for: English football still has a race problem

The lack of diversity is shocking.

These two are vital because they are rare. Ferdinand has repeatedly identified the covert racism that exists in the structures of English football, and for good reason. While England has worked diligently to make sure that racism on the field is a thing of the past -- and to some degree succeeded, minus a few major incidents involving England's brave John Terry, Luis Suárez and a few others -- the journey to equality is still long and arduous. England's racism problem doesn't have the same ferocity of Spain, Italy or Russia, but its lack of clangor is not evidence of erasure. The lights may be on now but the beast still lurks under the bed, waiting for its time to strike.

The last study carried out by Sports Person's Think Tank revealed only 19 black coaches worked in the available 552 available top coaching roles in England. Yet 25 percent of the players in those professional sides are black -- a staggering disparity. Sports minister Helen Grant acknowledged it would take a concentrated effort in order to bring about change, while some players have come out and slammed the instructional racism that plagues the sport.

Currently, the only black managers in the professional levels are Fabio Liverani at Leyton Orient, Chris Powell at Huddersfield Town, Chris Hughton at Brighton & Hove Albion, Jimmy Floyd Hasselbaink at Burton Albion and Keith Curle who manages Carlisle United. Notice none of these managers are employed in the Premier League. The last black manager there was Ryan Giggs, employed as caretaker at Manchester United until the arrival of Louis van Gaal, though Chris Ramsey may soon take up a similar role at QPR.

Given the makeup of the leagues in England, the lack of diversity is shocking.

This is nothing new in the world of professional sports. Take American football, for example. In more than 80 years of the National Football League's existence (in some form or another) there had been just six black head coaches, even though more than 65 percent of the players were African-American. The Rooney Rule, established in 2003, requires each NFL team to interview at least one minority candidate for a vacant head coaching position.

It's been suggested England could implement a version of the Rooney Rule to counteract this problem, yet such a suggestion has led prominent figures to reveal themselves as ignorant. José Mourinho responded to a question about the needs for a Rooney Rule in England with the assertion that there's no racism not only in England, but in football entirely. His reasoning was "If you are good, you prove that you deserve the job. Football is not stupid to close the doors to top people. If you are top, you are top."

It's time to acknowledge that players are suffering from an addiction and to provide help.

Balotelli's apology was remarkable in its rarity

Few players -- few people, in fact -- have admitted they were wrong to have made racist remarks.

Then there's Arsène Wenger, who ridiculously labelled the Rooney Rule as "a kind of racism," once again touting the divinity of merit. "It is again a kind of racism and what we have all to fight for is just competence, to put people who are good -- are they white, black, red, no matter what colour -- just put guys who have a competence in charge, and we have to fight for that." This from a man nicknamed "The Professor."

Perhaps these two top managers, and others thinking along the same lines, deserve the benefit of the doubt. Perhaps they misunderstand what, exactly, the Rooney Rule is. The rule is quite clear: just one minority candidate must be given the opportunity to interview for any head coaching vacancy in the league.

Read that carefully. Just one minority candidate must be interviewed. Not appointed, but talked to, given the time to present themselves as suitable for the job, considered, just merely allowed to sit down and have a chat about the position. That's what Wenger considers as racism. It is utterly depressing that a rule that simply asks for teams to just allow black candidates to talk to them is being combated, and it makes Mourinho's mockery of the existence of racism all the more infuriating.

If you are threatened by others getting the opportunity to just be given the chance to make themselves eligible for equal positions, then that itself is overwhelming evidence of a problem. Almost as much evidence as the fact that there's only 19 black coaches in 552 available jobs.

There's a saving grace, however. When investigating the pain caused by a disease --and racism is a sickness of the mind -- the persons who should be considered are the victims. Black aspiring coaches have voiced their pain against the hidden -- covert, implicit, however you want to word it -- systematic racism that prevents them from even sniffing the positions. The numbers don't add up and the ones suffering are saying, in no uncertain terms, that they're being prevented from jobs they otherwise qualify for.

When asked about the issue, Keith Curle, one of the few black managers, told the Guardian: "Do I think I haven't had enough job interviews because of my ethnic background? I've got no evidence to suggest that. Apart from the fact that I look at some of the people who got jobs I applied for and didn't even hear back from and on paper I was as good as them, sometimes better and I've not been given the opportunity to even sell myself." (Curle, incidentally, doesn't think the Rooney Rule will work, as he doesn't believe that football clubs will treat the interviews as anything other box ticking. The numbers from the NFL suggest he's wrong on this point.) 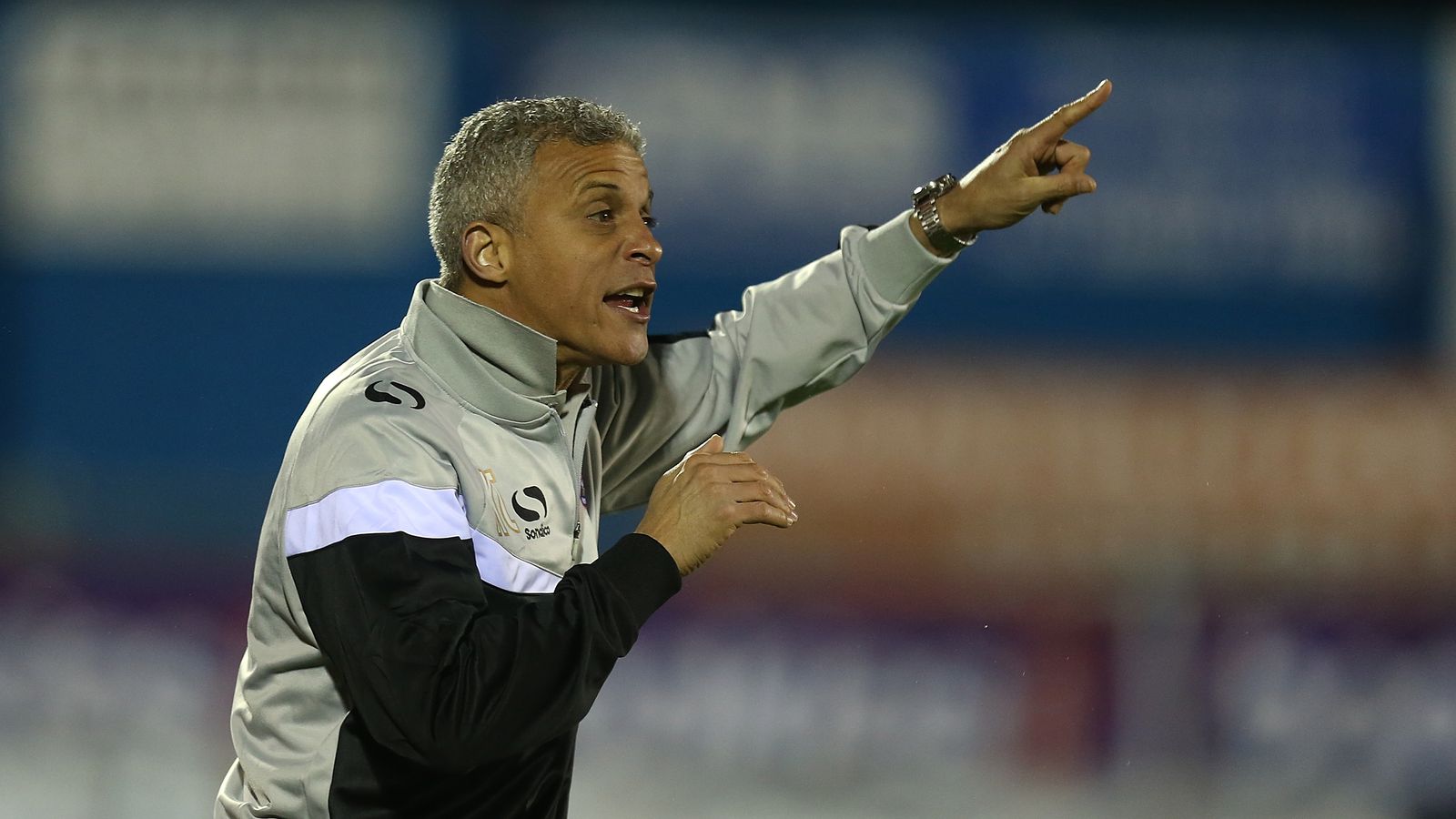 Despite the rush to champion meritocracy, this approach doesn't "rule" out merit at all. Merit, for all it's touted to be, doesn't really exist in the world, much less in football. In systems occupied by former players, their associates and executives of their clubs, merit is nothing more than an ideal. Notice that the same names always seem to circulate for open positions. Or that regardless of how badly some managers perform, they'll land on their feet eventually. It's not only an old boys club, it's a you-scratch-my-back-and-I'll-scratch-yours club. Why, it wasn't that long ago that Sir Alex Ferguson was loaning Manchester United players to his son's club, then withdrawing them as soon as Ferguson Jr. was sacked.

In short, while you are responsible for your successes, your connections certainly give you a step up.

The other vicious implication is the lingering, unspoken implication that "they're just not good enough," a racist narrative that blacks just don't have the mental capacity for the high-end positions. It's the same mentality that often blocks black players from on-field positions that require nous and reduces their abilities to the stereotypical "power, pace, strength", while describing their similar counterparts in more forgiving terms. It's not an advisable route to take.

To prove that they're just not good enough, you would have to give them the opportunity first to fail. The problem is blacks aren't even getting through the door to begin with. Even if you wanted to judge an entire group of people --and you really shouldn't -- then this isn't the place to begin. Nineteen out of 552 is just no sample size.

Ferdinand's appointment is a positive sign, and there's evidence that top officials are working to address the problem. But along with initiatives like the Rooney Rule, there must be general reflection by the clubs, their owners and fans in general on the state of the game. Declaring that racism does not exist anymore in football because of your own hubris, or because you no longer see bananas being hurled onto the field, is laughably silly.

A closer look at English football reveals it is just as discriminatory as its neighboring countries. There's no justifiable reason for a supposedly progressive country to still hold such an archaic structure -- a racist and exclusive structure.