Greek Chair Umpire Eva Asderaki talks to SB Nation about life in and out of the chair.

Share All sharing options for: Sitting Down With Chair Umpire Eva Asderaki

COLLEGE PARK, MD -- Tennis can be a confusing, even bewildering sport to follow. With hundreds of men and women playing singles and doubles in several different tournaments in different countries and continents each week, there are a lot of moving pieces.

Luckily, in the face of such chaos and unpredictability, there are the chair umpires. A core of roughly ten elite umpires are there at every tournament as men and women who have risen to the chairs at the top of the ladder.  Chair umpires keep order and narrate the matches, their familiar voices provide a stability and comfort level that the frantic world of tennis needs

One of the best of the elite umpires is Eva Asderaki of Greece, who presides over matches with preternatural calm and a long blonde ponytail.  Asderaki has risen to the biggest stages of the profession with incredible speed. She has not yet called a Grand Slam final -- she has worked several Grand Slam semifinals -- she certainly seems poised to get that deserved honor in the near future.

I sat down with Eva at the Citi Open in College Park, Maryland, to discuss life in and out of the chair. 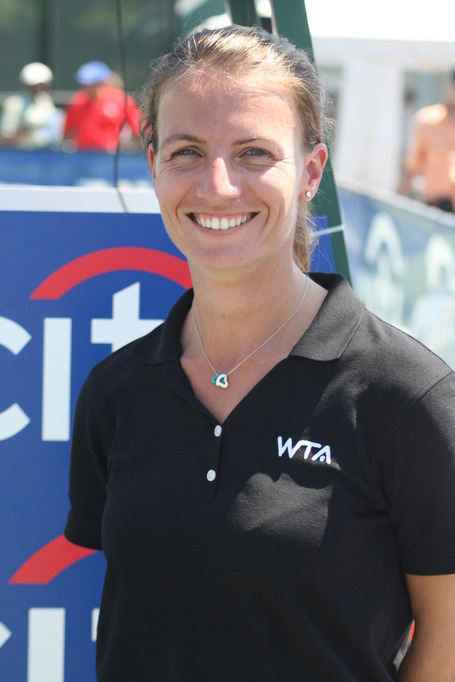 SBN: You've risen to the top of the chair umpiring ranks -- what does it take to make a great chair umpire?

Eva Asderaki: What does it take? (laughs) I think first of all you must love what you do, in order to do it well. You must love traveling, because we travel the whole year. Different places, different continents. It does get tiring, but it is obviously very nice and very exciting to go to different places, see different things, and meet new people.

SBN: Do you get to pick your own schedule?

Eva Asderaki: Not really. I am contracted by the WTA, so we do our schedule together. And then I apply to every other tournament, like the Grand Slams, that I would want to go and work.

SBN: You're from Greece, which is not a big tennis country--how did you get started in tennis?

Eva Asderaki: I played tennis as a junior, but only as a hobby. One year, at my tennis club, we had an international tournament and they asked us to help as line judges. And that's how I started. I liked it and I met people who came from other countries, and they told me about their experiences. It was something that I really liked, so I started!

SBN: Would you say that you've risen higher in tennis than any other Greek person in tennis history?

Eva Asderaki: (Laughs) I don't know about that! I wouldn't say anything like that.

SBN: You're calling a doubles match later -- do you have a preference between calling singles or doubles?

Eva Asderaki: No, no, they're both exciting, each in it's own way.
SBN: There's no Hawkeye here [at the Citi Open] -- do you think it's easier to call tournaments with or without Hawkeye, and how is it different for you?

Eva Asderaki: It's ... different. Hawkeye is a great innovation in tennis the last few years. I think it helped everybody and it made things easier. The players are more relaxed. If they disagree, they challenge, they see the result, and they go on and play. For us, it's fine. It's nothing to be scared of, it's nothing to worry about.

SBN: I've heard suggestions that they should use Hawkeye on clay, instead of having to try to find the right mark.  Would you be in favor of that?

Eva Asderaki: That would have to go a long way to get approved, I don't know (laughs). 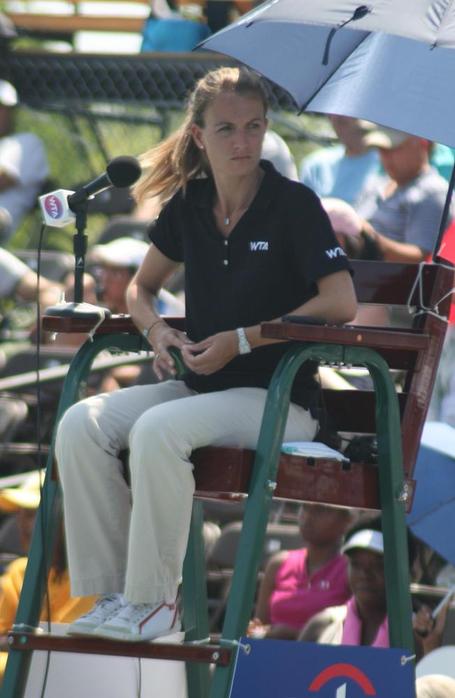 SBN: You do a lot of your work sitting in chairs--which tournament has the most comfortable chairs?

Eva Asderaki: (Laughs) I don't know really! That's a good question. I don't know. Here the chairs are good: they're quite comfortable, and there's a lot of space.

SBN: Any least comfortable chairs that you can remember? A tournament the chair umpires dread every year because of the chairs?

Eva Asderaki: No, nothing that bad. But there are definitely some chairs that are not as comfortable. I can't remember any right now though (laughs).

SBN: There's a small group of chair umpires who work all the biggest tournaments -- you, Allison Lang, Lynn Welch, and others -- do you all hang out outside of work at all?

Eva Asderaki: As much as we can, yes. Obviously during the tournaments it's easy to be together, to go for dinner together and socialize. But, outside of the tournaments ,it's not that feasible because we are in different places. But we are very close, yes.

SBN: You call some men's matches as well, at the Grand Slams and at some other tournaments. How is the feel different for calling men's vs. women's matches?

SBN: I said on Twitter that I was going to be talking to you, and people were very excited. Someone asked for me to ask you what kind of shampoo you use, because your hair always looks amazing on TV. So ... what is your secret?

Eva Asderaki: (Laughs) I don't know if this is going to go down with commercial? I'm using Dove. (Laughs). 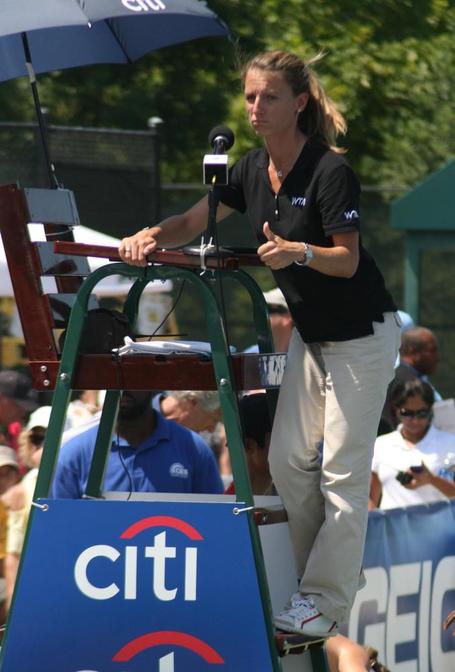 SBN: Thank you very much for your time, Eva, I appreciate it.

Eva Asderaki: (Laughs) That was very good, thank you. (Laughs)