German veteran Tommy Haas talks to SB Nation about his road back from hip surgery, his daughter, and his flip-flopping flag.

Share All sharing options for: Tommy Haas On Flags, Frauleins, And Ponytails

WASHINGTON -- There are few better talkers in tennis than German veteran Tommy Haas.

Having just returned from over a year of not playing due to a labrum tear that required surgery, Haas, who was ranked inside the top 20 at the time of his injury, is currently ranked No. 576.

More has changed for Haas than just his ranking. In early 2010 Haas became a dual citizen and switched his affiliation from Germany to the United States, though he since switched it back. In November of 2010, he and fiancee Sara Foster became parents to a daughter, Valentina.

After Fernando Gonzalez pulled out of what was a highly anticipated rematch of their 2007 Australian Open semifinal, Haas won his first round comfortably over lucky loser Amer Delic, 6-2, 6-3.

Haas was one of the first players I ever interviewed for SB Nation back in 2009, and his candor and self-awareness then and now make for some pretty fun reading. 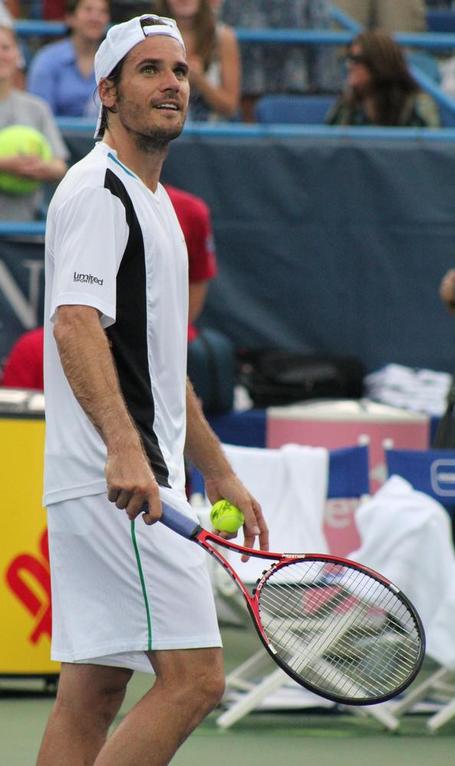 SBN: It always seems very emotional, almost cathartic for you when you play. Did you have an emotional outlet when you were out injured to keep yourself sane? Something else you could be intense about?

Tommy Haas: Yeah, when I'm on the court I'm really tense, because I want to win and I'm not really that patient on the court. If you do something since the age of three or four years old, that grind can drive you absolutely insane sometimes, and I can't hide my emotions at times. But off the court I'm more relaxed. Maybe sometimes behind the steering wheel I go crazy too. Or at the airport. Or at a restaurant.

But overall, it was a tough time when I found out I had to have hip surgery, even though on the other hand I was happy about it because something had been happening with my right hip for about six or seven months, and nobody had been able to give me any answers until finally they said I had a labrum tear.

So then I did have the surgery, and right after I was not doing too well mentally, but within four days of the surgery we found out that we were going to be parents. So I think that really helped me mellow down, taking part in everything that comes along with your wife's pregnancy. It was kind of cool. So that was definitely a big help to me.

SBN: Are you prepared to go back to the challenger level to get your ranking back if you need to?

Tommy Haas: If I have to, yeah. Maybe. That depends a lot on my body, and how I'm doing. I'm going to try to play as many Tour level tournaments as I can, certainly through the end of this year. And then we'll see how I'm doing, body-wise, mentally, and see if I can give it one more good shot next year.  If I'm still enjoying it, if I'm still winning some matches, and I feel like my game is getting back to where it can be, I'll definitely continue to play. But if that's not the case ... then we'll see.

SBN: Right as this last injury was starting, you switched to playing for the US, but you've since switched back to Germany. What was the thought process behind both the switch and the switch back?

Tommy Haas: That was interesting, because I don't even know the rule. I definitely wanted to get American citizenship, because I knew that I could also keep the German one. Then, just for the fun of it, I called the ATP and said "I'm an American citizen now, put the American flag there." And they said "sure, okay, no problem." And then I called back and said "put back the German, just for fun." And then the discussion happened, like "you gonna keep doing this?" And I said "maybe, we'll see what's going on."

My dream always was to play the US Open with the American flag next to my name, because, you know, the US is obviously a special place for me. I've been here since 1991. My child was born here. My life is more in Los Angeles now than Florida, but still. It would be something special. I don't know if I'll do it this year, or next year if I'm still playing. But that's something I've had going through my mind, so I have to decide what I'm going to do.

SBN: I know you had problems with the German Fed Cup team at some point--

Tommy Haas: No problem. It's the ponytail that threw you off. (laughs)

SBN: Does that have anything to do with your switch, the problems you've had with the German federation?

Tommy Haas: Did they have a problem with my switch?

SBN: Well, that, but also is part of the reason you switched all the problems you've had with them?

Tommy Haas: You know, there's always a lot of politics involved with different people running a federation, which I dont know much about.  But I guess there's always some sort of problems that occur. I haven't played Davis Cup now since 2007, with the German team. That year we had a pretty good chance, got to the semifinals, and I just decided that, you know what, I'm done playing Davis Cup for a while. And I really hadn't thought about it too much.

But then since I've become a US citizen I've thought about it again. And some of the American players were saying "yeah, think about it, maybe come on the team." And, you know, it's a tough thing. If I would do that--it's maybe not the best thing for me to do if I want to show my face around Germany anymore, because I've been in the press there for quite some time because of the tennis status that I have. So I don't know if that's the smartest thing.

On the other hand, if I want to win the Davis Cup, I feel like I would have a better chance with the States, for sure. So if I play Davis Cup again, next year would be the time to decide, since this year both teams just lost in the second round. So luckily I don't have to think about that right now. It's a thing that's interested me, but I wouldn't know what to do right now. 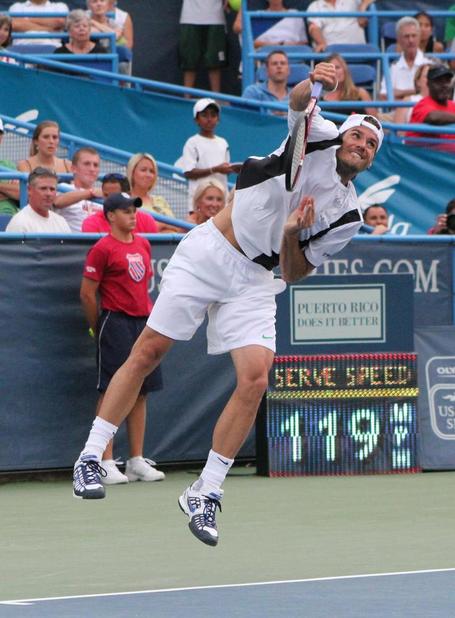 SBN: You mentioned your ponytail ... You've come to Washington before both with it and without it -- do you think you play better with or without it? What's your thinking there?

Tommy Haas: I don't really know. I could argue the fact that I was No. 2 in the world when I had it once. I've really just been too lazy to get a hair cut lately. I just got back to the tour in May, really starting to play a little bit more. Since then it's already bothering me a little bit, I just didn't decide or know what I want do with it right now.

Once it's in a ponytail it's okay, because you just put it back and it's fine, so you don't worry about your look. It's more when it's shorter a little bit in length, and you have to start putting gel in it and stuff, wasting your time with ten minutes in front of the mirror. So I prefer this. But it looks a little girly at times, so I don't know. And I'm a father now, too, so I have to be serious.

SBN: There are a lot of young German women who are playing well right now--have you thought at all about which one of them you might want to play with in mixed doubles in the Olympics?

[Andrea] Petkovic is playing pretty good, [Julia] Goerges is playing pretty well, but I would maybe choose [Sabine] Lisicki over all of them, because she also practiced at Bollettieri's tennis academy, so I've known her for quite some time, and I like the way she plays. She plays really aggressive, and I think that helps in mixed doubles, because the guy on the other side is going to play aggressive. She would be my first choice, and maybe that's something I'll talk to her about next time.