Share All sharing options for: Janko Tipsarevic On Novak Djokovic, Rafael Nadal, And That Plastic Gun

Early July was a good time for Serbian tennis. Probably its best time ever.

Novak Djokovic had just won his second grand slam title of 2011 at Wimbledon, his third career Grand Slam title. The win moved him up to No. 1 in the ATP rankings for the first time, and his record in 2011 sat at 48-1. All this made Serbs quite happy.

But it wasn't just Djokovic. The Serbian Davis Cup team defeated a depleted Swedish squad to make the semifinals of the World Group for the second straight year, and had done so without new No. 1 Djokovic playing singles.

Life was good for the Serbs. So good that it was time to start joking about how badly everyone else wanted to shoot you. 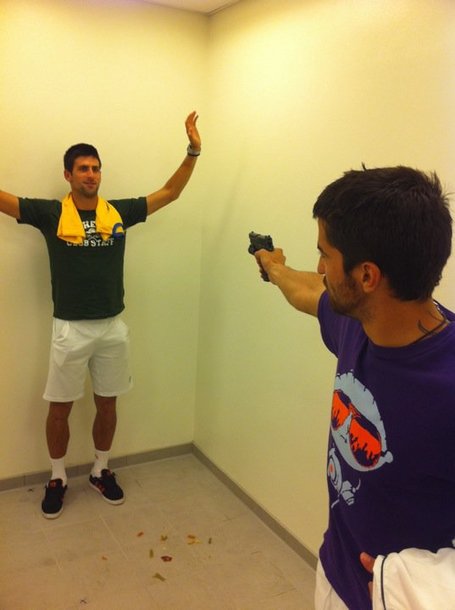 Janko Tipsarevic, the current Serbian No. 3, posted the above photo of himself and Djokovic onto his Facebook with the caption "How much $€£ would #Nadal gief??;)"

While I was personally only offended by the spelling ("gief?" Really?), others took considerably more offense. Tipsarevic had taken the photo down by the next day, but far too slowly to prevent it from reaching permanence on the interwebs.

At his first and only press conference at the Legg Mason Tennis Classic (after his quarterfinal loss to top seed Gael Monfils), I asked Tipsarevic about the photo.

SBN: Janko, a few weeks ago you posted a photo on Facebook, of you and Novak Djokovic. And I think you later took it down? Can you talk about that photo, how you staged it, what was going on, and why you took it down?

Janko Tipsarevic: That was...it was a bad joke, you know. We were really happy that we won Davis Cup. We were at dinner, and I think there was a plastic gun? And it was a bad and it was a stupid joke. Just, at that time it seemed funny, because the joke was about how dominant Novak is, that nothing can stop him this season, you know?

But as you said, the next day, I took it off Facebook and Twitter. But, as I heard later, it was all over the internet. And you know, people were blaming me, for you know, thinking that...I hate Rafa.

And then I called Novak and Rafa the next day, and spoke to them, and they were fine about it. They told me to be careful because with this social networking, people can get things like this in the wrong way.

I still blame myself, I think it was a bad, bad joke. But, anyway. You can make a bad story out of everything if you want to, you know? I apologize to anyone who thinks it was, like, offensive to anyone on tour. But, you know, the pictures were out the next day, and that's in the past.

So there you have it. An immediate apology that shifted into some mild excuse making.

Here's hoping Linda Tripp will someday leak the audio of Tipsarevic's call to Nadal, because that has gotta be gold.