Federer's age and path to the final have most writing him off, but Advanced Baseline begs to differ. Tournament forecasts, draw analysis, and favorite bets in this year's Wimbledon preview. The women's forecast is here.

Grass court tournaments are scary to predict regardless of who's playing. They comprise just 3.6 percent of all matches played in a tennis calendar, so there's never enough data to make solid surface adjustments to players' rankings. The fast surface gives the underdogs a puncher's chance against the top seeds. And if the general conditions weren't enough, it just so happens that grass is the worst surface for the top two of the Big Four and the best surface for the other two. All of these fronts are combining for a perfect storm of sorts, where there is no dominant favorite.

The men's draw at Wimbledon is as far as you can get from the French Open just a month ago. There's no overwhelming favorite, surface specialists can't skew the bracket as much, and luck of the draw matters even more. This is where quality forecasting becomes a little more useful with questions like "How will Nadal's unbalanced No. 5 seed affect everyone's chances?" don't end in "It doesn't matter -- everyone knows who's going to win anyway." And while the odds still favor the Big Four versus the field, at least there's still some suspense as to which of the Big Four will win.

Below is a 52-week tracking graph of the grass-adjusted AB ranks of the Big Four from last year's Wimbledon until now. It's a quick way to see what's changed at the top of the ladder, and how it might cause things to be different this year. 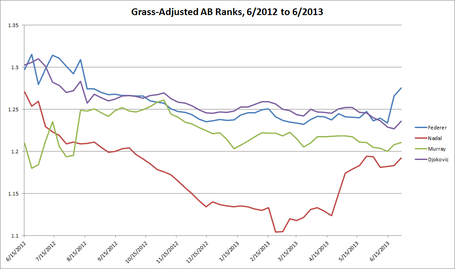 It's not unreasonable to wonder if Nadal should be a little higher on grass right after his French Open win. Yes, it's his worst surface, but is he really at the bottom end of the Big Four after adjusting for surfaces? Part of that comes from his second-round upset last year at Wimbledon, which is probably being weighted a little too heavy against him since he was playing on a bad knee. On the other hand, his base ranking did go down a little during the French Open from dropping sets to power hitters like Daniel Brands and Martin Klizan. It's a reminder that if Nadal can be beaten, it will most likely be by power hitters; and grass is where a power hitter will have the best chance.

Roger Federer and Andy Murray both won their grass tune-up tournaments two weeks ago against relatively similar competition, so why did Federer get a bigger boost? Because Federer had more impressive scoring margins in his victories, and there's evidence that scoring margin matters. That said, I'm worried that Federer's mini-surge is overshadowing his decline, and the relative lack of grass data gives too much weight to his recent performance. More on that later.

Generated from simulating the tournament 100,000 before the tournament began, using win probabilities from AB ratings. Full explanation for calculating luck of the draw can be found here.

I got a lot more worried that Federer's mini-surge was being overvalued when I saw the forecast numbers. He got the draw of death and still comes out as the favorite? Part of that is because he has the easiest path through the fourth round (getting an unlucky early draw hurts your forecast more than an unlucky late draw), but what's really boosting his chances is his grass adjustment. Consider this: In the last eight years, Federer has lost on grass to a player outside the top 20 exactly once. Murray's done it five times, Nadal four, and Novak Djokovic six. It might sound weird to downplay the grass expectations of two former Wimbledon champions (Nadal and Djokovic), but historically, neither has overachieved on grass nearly as much as Federer, and that should mean something.

Outside of the Big Four, the unseeded players most primed for a run include Radek Stepanek, Nicolas Mahut (no it won't happen again -- Isner would be in the semis), and Lleyton Hewitt, if he can pull off a first-round upset.

As hyped as Federer's draw of death is, the numbers say it more or less cancels out with an easy first four rounds, which no one is really mentioning. I know there's a tendency to automatically write the Big Four into the quarters of every major, but as Nadal will tell you, sometimes those upsets really do happen. David Ferrer, Juan Martin del Potro, and Kei Nishikori all got the biggest boost from the draw; that is somewhat ironic because they all drew each other and therefore faded Nadal. But their sections are also packed primarily with clay specialists. There's an over 80 percent chance that one of those three will be in the semifinals.

Stan Wawrinka got hurt the most by the draw, landing the ultimate grass grenade thrower in Lleyton Hewitt in the first round. Murray also drew a rare first round grass-specialist in Benjamin Becker (who got an astounding 67 percent of his draw-neutral expected points stripped away from drawing Murray in the first), and Jo-Wilfried Tsonga probably got the worst second- and third-round matchups. (Poor Ernests Gulbis got an awful draw yet again. Maybe the U.S. Open will be nicer to him.)

All I could think of while looking through the forecast is "I wish I had more data."

I probably think Djokovic is better on grass than Advanced Baseline says he is, but it's impossible to know for sure when he hasn't played a grass tune-up tournament since 2010. Is Federer's grass edge over the field as real as the forecast says it is, or do we simply have more conclusive information about him than anyone else? This is a downside of sticking to strictly empirical conclusions when a little bit of speculation might help.

On the other hand, speculation is also the place where bad clichés and unfounded narratives are born, and their track record of improving prediction isn't all that great. There's a happy middle to be found between the two, but until then, AB's strictly empirical view still sees Federer as the best grass player in the world and a mild favorite to win Wimbledon yet again.