Here are the tennis courts on which I grew up playing. 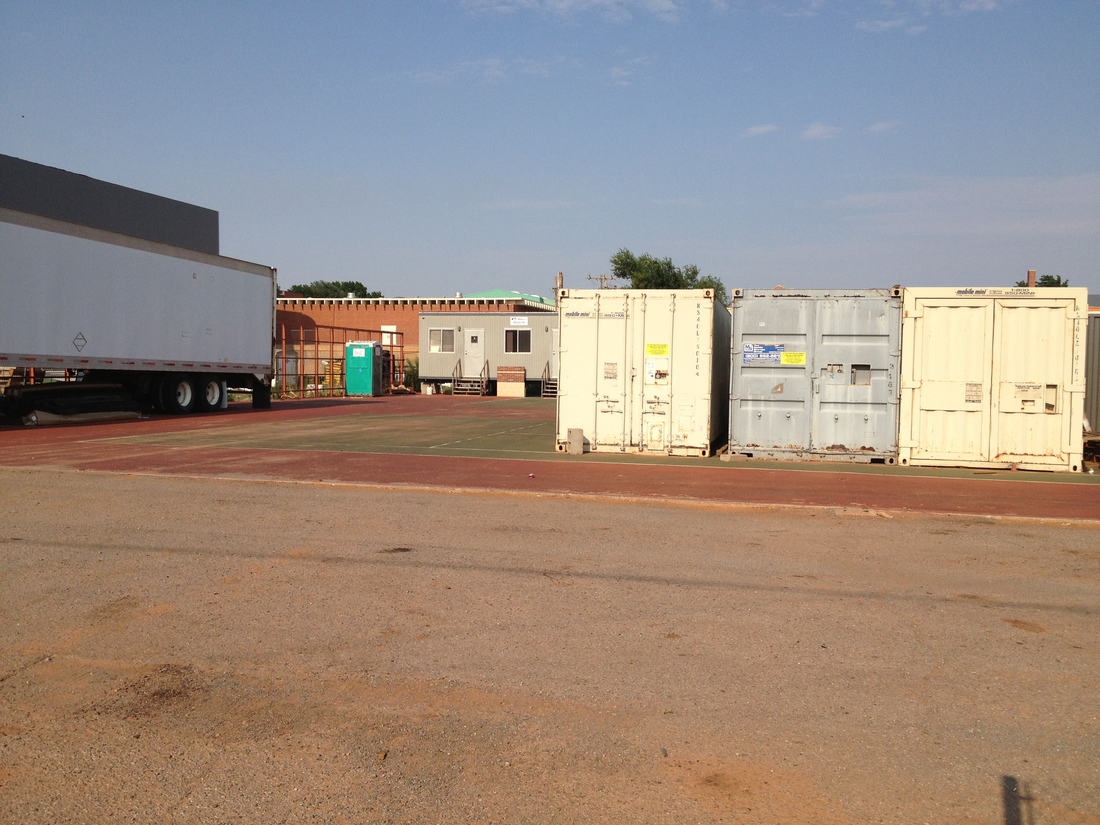 They're holding construction equipment for a project that will soon overtake them. From that service line, I served out a title in the local Wimbleford high school doubles tournament (Get it? Weatherford, OK, plus Wimbledon? Get it? And don't be too impressed with the title. It was doubles, and the competition was something less than fierce. But I still have the plaque.). This was a pseudo center court of sorts during the Thursday night scrambles. The courts where I practiced in my high school years were done in by school expansion. The courts I played on in college, probably 100 yards away from my dorm room, now hold a new dorm.

Tennis is a lot of things to a lot of people. And in America, it is not the game it once was. It still exists; you can still find courts on which to play. Some of them have been maintained relatively well. Some of them even have lights! But once built as a primary source of recreation, built as part of so many parks and general rec hotspots, they have been pushed to the town perimeter, out of the way of the general public. And it's just as well -- the nets were falling apart, and grass was growing in the cracks in the concrete.

Tennis is a niche. It always has been. It is expensive watch commercials and rich people in boxes and harps and (until recently) less-than-equal prize money for women and super-important matches televised at 4 a.m. Accessibility and relatability are often issues. Obviously. And as a sport you watch on television and follow religiously, it has perhaps faded a bit, due to either more options or fewer American men. But the fade has been only marginal. January's annual Harris Interactive publication of Americans' favorite sports showed us that, while men's tennis was the favorite sport of five percent of Americans in 1985, it was the favorite of only two percent in 2012 (up from one in 2002!). But women's tennis, not even on the grid 30 years ago, has been oscillating between one and three percent for the last decade. Added together, the percentage is pretty close to what it was in the days of Connors, McEnroe, Evert, and Navratilova.

Tennis is still the favorite of one in 20 (or so) Americans, and the passion in that group is as strong as or stronger than it has ever been. If you don't believe me, then you aren't following the right people on Twitter. But the other 19 seem to have let it slip away further from their radar. And they damn sure don't go and play tennis just for fun. And hey, perhaps they never did. The tennis court construction boom of decades past may have been misinterpreting the sport's popularity all along. And the dilapidated courts simply remind us of something we used to pretend to care about, like jai alai, Jane Fonda tapes, and perhaps recreation as a whole.

Tennis is, in the states, desperate for an American male star. When it was at one percent in the Harris poll in 2002, when Pete Sampras was beating Andre Agassi in the U.S. Open finals and Andy Roddick was claiming residence in the top 10. So let's not pretend that a star cures everything. Still, as amazing as it has been watching Federer and Nadal and Djokovic and Murray develop through the years, a pure lack of patriotic cause has left some people without a rooting interest and, therefore, interest.

However, tennis is, ever briefly, an American sport each late-August and early-September, at least until football begins. It ramps up with stops in places like Cincinnati and Winston-Salem, and it peaks with a fortnight in Queens. Granted, the U.S. Open basically gets the Indy 500 treatment -- let's all find out what's going on with a sport we haven't paid much attention to since last year around this time! -- but it's something. Sure, people pay attention peripherally during slams -- a majority of the casual set could probably tell you that Roger Federer is struggling, that Rafael Nadal is back, that Serena Williams is still looking good, that Sloane Stephens is rising quickly, that Maria Sharapova is hurt, and that a couple of women they'd never heard of were in the Wimbledon final -- but only when the U.S. Open begins does this sport feel completely natural and at home in the states. And then it quietly makes way for football, to appear in the middle of the night and on tape delay in the early seasons of the next calendar year.

For those who continue to pay attention, however, tennis is Sloane Stephens and Madison Keys and Christina McHale and Mallory Burdette and Alison Riske, young Americans jockeying for position in a post-Serena universe that Serena continues to fend off.

Tennis is one changing-of-the-guard after another. Roger Federer was built to finish off the power-serves-and-little-else era, with perfect groundstrokes and angles upon angles. Nadal, with his ability to chase down angled winners and hit every shot to within a foot of the baseline, was built to beat Federer. Novak Djokovic, with even deeper strokes, better defense, and super-human stamina, was built to beat Nadal. Andy Murray is molding himself into Djokovic 2.0, with the same defense, even better stamina, and a better physique. And at Wimbledon, we caught a glimpse of the next era, too, when Jerzy Janowicz, half-Juan Martin Del Potro (devastating power and size), and half-Jimmy Connors (attitude and charisma), blazed to the semifinals and took the first set from Andy Murray. And on the women's side, Monica Seles was built to take down Steffi Graf, Venus Williams was built to take down everybody, and Serena Williams was a bigger, stronger Venus.

Tennis is a relationship. By the end of a two-hour singles match, you know a person pretty well. You've gotten a glimpse into their character. You have seen them happy, and you have seen them frustrated. You have watched them deal (or try to deal) with their limitations. You have been attracted to their confidence or frustrated with their stubbornness. By the time she was raising her runner-up trophy at Wimbledon, anybody following the sport felt like they had gotten to know Sabine Lisicki well, from her smile, to her on-the-surface emotions.

Tennis is its silly crowds, going ghost-silent while a server bounces a ball, shaming anybody who speaks up, rumbling like church-goers before a wedding when the ball clips the net mid-point, then laughing at itself post-rumble.

Tennis is 77 years vanishing in an afternoon.

Tennis is Venus Williams and Lindsay Davenport bludgeoning each other for nearly a decade.

Tennis is, in America, a waiting game. When will the next great American male come to the forefront? And how long is this damn Djokovic-Murray match going to last, anyway?

And yes, tennis is women grunting and yelping. Get past it.

Tennis is back in the States, with fifth-set tiebreakers, night matches, one last go-round from James Blake, an impending Serena-Azarenka women's final, and a wide open men's draw. Let's have some fun.