Here's how to beat Novak Djokovic — if anyone actually can

Novak Djokovic might be playing the best tennis the world has ever seen. How do you beat the six-time Australian Open champion? And who has the tools to do it?

Share All sharing options for: Here's how to beat Novak Djokovic — if anyone actually can

Andy Murray and Roger Federer are, in some order, the second- and third-best men's tennis players in the world. Federer has won 17 slams, more than any man in the Open era, and Murray has won two with seven other slam finals appearances.

Because tennis loves sticking as much randomness into draws as possible, Murray and Federer were not paired up as No. 2 vs. No. 3 in the Australian Open semifinals. Instead, No. 1 Novak Djokovic had to face them both -- first Federer in the semis, then Murray in the finals. Combined score of those two matches: 6-1, 6-2, 3-6, 6-3, 6-1, 7-5, 7-6 in Djokovic's favor. Total dominance.

According to FiveThirtyEight's Elo ratings, Djokovic might be playing the best tennis the world has ever seen at the moment. He has won four of the last five slams and five of the last seven. He makes at least the finals of every tournament he enters. He actually came closer to the Grand Slam in 2015 than Serena Williams did, falling to Stan Wawrinka in the French Open finals (Williams fell to Roberta Vinci in the U.S. Open semis). He has won 11 of his last 12 matches against Murray, six of eight against Federer, and nine of 10 against Rafael Nadal. He has personally ushered Federer out of each of the last three slams with four-set wins. What was once tennis' Big Four is now a Big One. 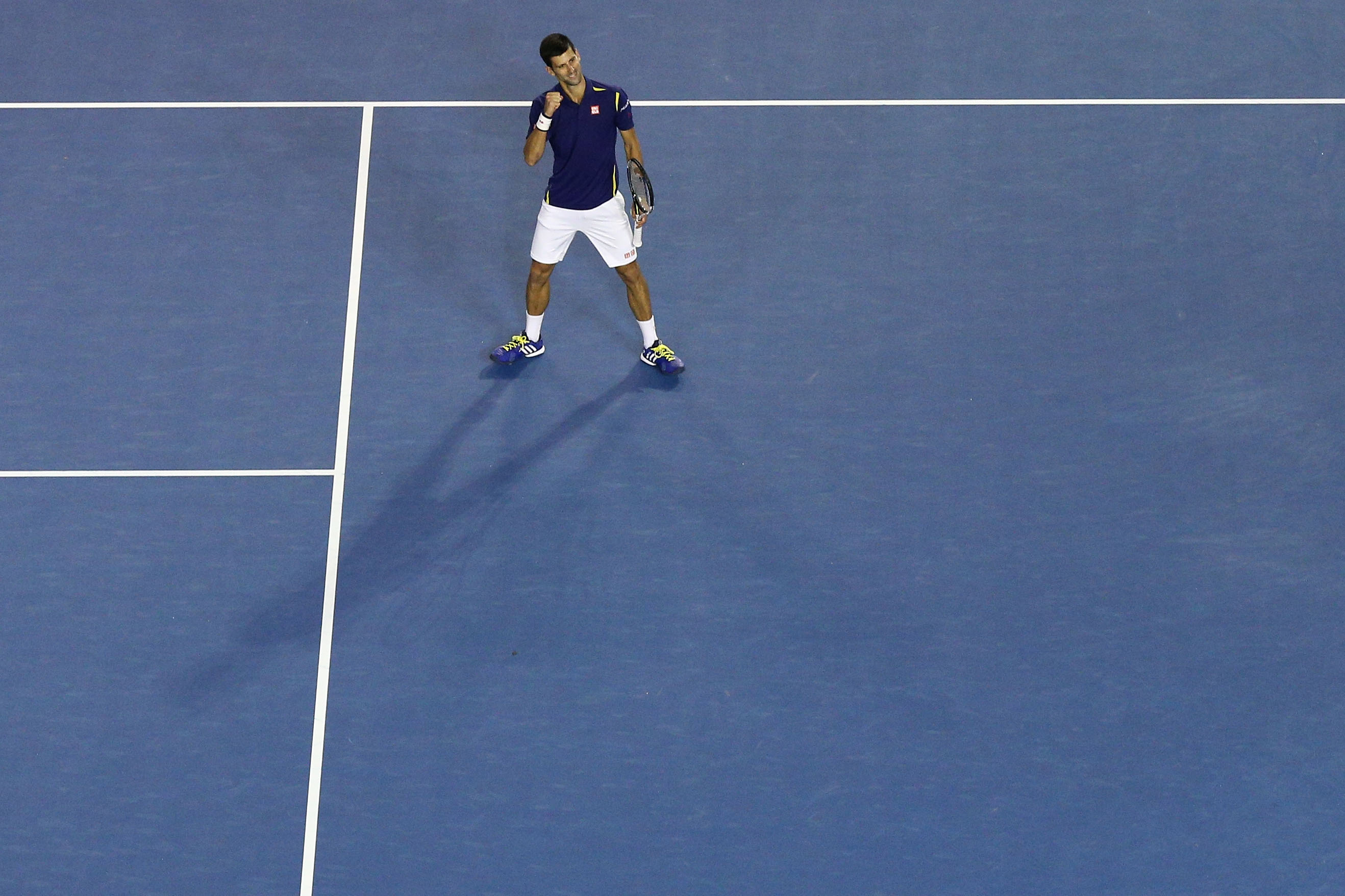 It is terrifying the way that Djokovic continues to add tools to his game. He has long been among the fittest and best defenders and return men in the world, but his backhand is world class, his offense is steady and now his serve has moved up a tier or two. He doesn't possess Federer's angles or Nadal's spin; he simply sucks away your will to win and your options for winning, then he knocks the ball past you.

On his bad days, Djokovic merely grinds out a win; he committed an incredible 100 unforced errors against the unorthodox, defense-heavy Gilles Simon in the fourth round of the Australian Open, but he still advanced in five sets. And on his good days, he is untouchable.

As was the case when Federer and Nadal were both at their respective peaks, the question in men's tennis is clear and singular at the moment: How in the world do you beat Novak Djokovic? A couple of months ago, I spoke with tennis coach, strategy analyst and ATP writer Craig O'Shannessy about just that.

O'Shannessy: If I'm a coach, and my player's playing Djokovic, everything starts with "How do we break this guy?" That's the key.

I've coached against him one other time -- it was Amer Delic in the third round of the Australian Open in 2009. It went four sets, it was a tiebreaker in the fourth set. It was a close match. Amer's 6'5, and was No. 65 in the world. I told him, Novak's gonna serve six times in a set; you only have to break him once. That's the goal.

So out of those six times, let's be honest, you're probably not going to get into four of those games. So I want you to go for your returns, I want you to swing big, whether it's a first or a second. Four games he's going to win in a walk, and that's okay. In fact, it's good for you because he's getting no rhythm. Those points are extremely short. And in those other two service games, you get into both of them, and maybe one you break.

He said that really helped him in that match because he wasn't trying to get into every single one of Novak's service games. He'd play big early, and if he got behind 30-love, the game's already over. If you just play it that way and do it a little bit differently ... you've got to play with a different mentality. Like Dustin Brown against Nadal at Wimbledon.

O'Shannessy was in Brown's box last summer when the unorthodox Jamaican-German took down the two-time Wimbledon champion. Brown played interesting angles, he attacked the next, he moved at hyper-speed between points, and Nadal was never able to establish a rhythm in a four-set upset.

O'Shannessy: It was Dustin's style anyway. We gave it conviction. We went back to where Dustin beat him at Halle and defined for him the key patterns that he needed to go again and again. We showed that to him, we validated those patterns, we made a few adjustments based on what we knew Rafa would do. And Dustin was very committed to it -- he could see it on tape, and he could hear it, and it was all validated by numbers. That was easy for him to go in and say, "Okay, this is a great matchup for me, and I'm going to commit to this game style."

It's like what Wawrinka did [to Djokovic] in the 2015 French Open finals. It was a really weird match. Novak's way behind the baseline, further than normal, going backhand to backhand. Stan's like, "I've got nothing to lose, I'm playing loose, I'm going to crush every backhand I see." And Novak's backhand wasn't hurting him because he was so far back. I talked to [Djokovic's coach] Boris Becker at Wimbledon -- Djokovic was basically just hoping Stan would miss.

To O'Shannessy, Wawrinka's win was the blueprint. Wawrinka has not had a ton of success against Djokovic in his career; the two-time slam champion has taken just four of 23 lifetime matches against Nole. But the progress has been clear. While his go-for-broke approach against Djokovic occasionally fails miserably, it often succeeds.

Wawrinka took Djokovic to five long sets in both the Australian Open and U.S. Open in 2013, knocked him out in the fifth set of the 2014 Aussie quarterfinals -- it's the only match Djokovic has lost in Melbourne since 2010 -- then went five sets again in the 2015 Aussie semifinals. The two had a history long before Wawrinka's 4-6, 6-4, 6-3, 6-4 finals win at Roland Garros.

O'Shannessy: We looked through the window in the French Open final. Novak wants to play the backhand, he wants to go backhand to backhand. But Wawrinka ... there is almost no one on the planet that has the raw strength behind a backhand like Wawrinka.

So there's a couple of ways you beat Novak. You have to have a better backhand, which is almost impossible, or you have to have a BIGGER backhand. And Wawrinka did. Wawrinka said, "I'm going to pole-axe this thing as much as I can," and the harder he hits it, the further it pushes you back, and because he's pushing you back, your return comes back weaker, which enables him to hit it even harder. You're not hurting him.

You can beat Novak, like you could beat Rafa, like you could beat Roger back in the day. But you've got to be smart about it, and you've got to stick to the game plan. Dustin Brown's got the perfect game to beat Nadal, but he's still gotta stick to it. In the next round against Viktor Troicki [at Wimbledon], he didn't stick to the game plan. He didn't bring the required amount of energy, which is the fuel to do it, and then he loses.

You can beat Djokovic, there's no doubt about it. Wawrinka's almost the perfect guy to beat him.

The loss to Wawrinka was one of only six that Djokovic suffered in 2015. The others:

Federer's backhand belongs in a museum, and in best-of-three matches outside of the slams, he can produce enough offense and initiative to break Djokovic's defenses. He was responsible for half of Djokovic's losses last year, the big-serving Karlovic was able to hit through Djokovic in an early-year upset, and Murray survived in three sets in the summer.

In best-of-five matches against the 34-year-old Federer, however, Djokovic still holds the edge. Perhaps because of energy conservation, Federer doesn't come out of the gates quite as aggressively against Nole in slams, and the result is a quick deficit.

O'Shannessy: You know, Roger should've come in [to the net] more [at Wimbledon]. Roger should have attacked more in last year's and this year's Wimbledon final. Roger didn't fully commit to the game plan in either of those years. And he had chances. But he was playing from behind in both of those. He could've done better. It was disappointing.

And even though Roger has done better against Novak recently -- he had a couple of wins against him before Wimbledon -- it's only if Roger gets him on a hard court and plays with nothing to lose.

Just look at the deciding sets in the slams. Novak's concentration stays longer. He beats Murray and Wawrinka 6-0 in their final sets at Australia. He beats Federer 6-3 in the final set at Wimbledon. He's pulling away from guys. They haven't committed long enough, and then they basically get in their minds, "Well, I've tried this for an hour and a half, and it's not working, and it's not gonna work. I'm basically a dead man walking out here."

Right now there are a lot of guys out there who think it's almost impossible to beat Djokovic.

Fighting Djokovic off is like fending off a zombie in a movie. He never stops. Maybe he suffers a lapse in concentration, or maybe you're able to find a rhythm for a while. It's going to have to last for hours to beat the champ. Wawrinka was able to pull it off in Paris. No one else has been able to at a slam since Kei Nishikori in the 2014 U.S. Open semifinals.

O'Shannessy: You know, a guy that can hit a good, hard backhand when he's playing really well is Nishikori. In some ways, you could say Nishikori's a younger, faster version of Djokovic. The serve's not as good, the return can spray a little bit, but when Nishikori went through that six months of "holy cow, he's almost the best player in the world," then he's something else.

O'Shannessy is referring to Nishikori's late-2014 run that peaked with a U.S. Open finals appearance. In New York, Nishikori survived a brutal draw -- he took down Milos Raonic in five sets in the fourth round and Wawrinka in five in the quarterfinals, then took down Djokovic in four sets in the semis. He ran out of gas in the finals (Marin Cilic blew him out in straight sets), but Nishikori's combination of speed, defense and, yes, that backhand, were devastating.

Nishikori is currently No. 7 in the world. He hasn't quite maintained his late-2014 form, but he is still clearly one of the best players in the world. And at 26, he's one of the few players younger than Djokovic with the right set of physical tools.

Nishikori got a chance to prove this in the Aussie quarterfinals. Djokovic won, 6-3, 6-2, 6-4. Djokovic won 66 percent of his second serve points; Nishikori won 40 percent of his. Djokovic covered more than 10 meters per point, serving as a human backboard and inducing 54 unforced errors from Nishikori in just 173 points.

The template for beating Djokovic exists. But even if you understand the template, and even if you've pulled it off once or twice, you're still probably a dead man walking.