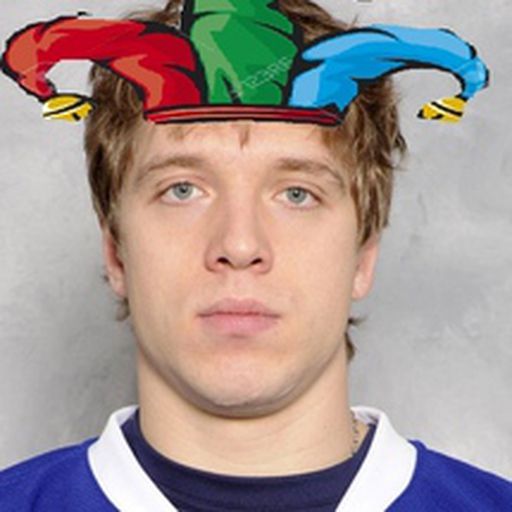 The Lightning made the finals in 2015, when Stamkos was 25, Kucherov was 22, and Hedman was 24 (Point wasn’t on the team yet.) Most of their individual stats were less gaudy than the Leafs, yeah, but then, they were also a very deep team with lots of good forwards, which is how they led the NHL in scoring that year. They could afford that because most of their players were either on ELCs or fairly reasonable second contracts, Stamkos excepted. And here we are.

Not that I’m counting on it, but if Marner is ever a key contributor on a Leaf team that wins the Stanley Cup, he will be able to run for Emperor of Toronto and get elected.

I believe in keeping a cool head on this stuff—people responding to his offseason posts acting like douchebags are, well, douchebags—but in a capped league his contract is absolutely part of his value from the perspective of building a team that can win. In the most utterly unemotional and impersonal analysis Marner at $11M is less valuable than Marner at $9M the same way as if he had fifteen fewer points. I don’t think we should separate him from his contract if we’re trying to figure out how valuable he is to the team. If we’re trying to just figure out what to do with him now that we have him, as Hardev is above, then it’s an aside. But the contract matters. Even if we’re sick of talking about it.

Tbh I think Sheldon Keefe was sent in with a mandate of Make Matthews and Marner Happy and they like playing together, and here we are. In justice to Keefe it’s not like it was a bad line.

Because I was away during the vote period this year, I didn’t cast a ballot in this year’s T25U25, and I didn’t add to the writer comments. However, having looked over his numbers and his comparables, and read a few analyses, I do have a thought on the player I’d like to share.

I could be wrong here for sure, I’m just wrestling with the idea of teams taking on an $11M cap hit in this environment.To be clear I don’t think you have to give him away or anything, just that there’s inevitably salary ballast involved.

FWIW: this January, Kevin Papetti and I had an argument in the chat about a Marner for Ekblad swap. I said the Leafs ought to do it, but Florida might be reluctant. He thought it was a gimme for Florida. It’s possible I overestimate the sticker shock of the cap hit.

He trades either Marner or Nylander, which is going to be affected by the seasons they’ve each had. Marner would probably be preferable but if he has a down year and the team flops again Nylander might be more movable. Rielly walks.

clrkaitken's comment on 2021 Top 25 Under 25: Mitch Marner needs a change at #2 from Pension Plan Puppets,

Tbh I think the Art Ross and the Hart would make it look fine. The guy’s a top-five offensive player on the planet and it bought eight years.

In the end we’d have to try and establish what counts as an overpay for Marner. Was it in line with his market then? No. Is it in line with the market now? Definitely not. I don’t see any case otherwise. Simple as that.

To be honest I don’t even believe that. It was an overpay the instant it was signed, before the pandemic was a glimmer. It’s worse because of it, certainly, and its downsides would have been mitigated had the cap gone up, but he sticks out like a sore thumb next to anyone who can be reasonably considered his comparable.

It also passed into "definition of insanity" territory by the end of the year I think. I have a lot of patience for the idea that players this good will eventually figure it out, but they kept not figuring it out, and here we are.

Marner denied them to TSN. Whether the denial is accurate or not, you’d think him being so vociferous about it means he’ll probably be open to changes in future.

I think both teams can do better things with the assets involved than trading them for each other. The Sabres are facing a long rebuild regardless and encumber themselves while giving up on a still-prized defence prospect—putting aside that they’re pretty openly planning to tank this year.

The Leafs get worse for this season because they don’t have an obvious candidate to spend the cap space on at this point in the offseason, and the Leafs are trying seriously to win now; I’m also pretty dubious about Dahlin being worth Marner even with the enormous cap disparity. But the result is a trade which neither team is in a position to take advantage of even if they win it.

If the Leafs were going to trade Marner this offseason for prospects, the ideal candidates would have been teams getting impatient with rebuilding and trying to surge up the standings—the Rangers or Los Angeles would have made sense (not coincidentally, both linked to Eichel). Chicago had the right attitude to take advantage of, and Columbus did, but their weakness was so obviously on defence it was natural for them to spend there and not on a winger like Marner. If we’re going through this again next spring, I’d be looking for teams in that overeager mindset.

(Although if we’re going through this again next spring, that probably means they failed to make R2 again. God knows what Marner’s trade value will be after that.)

I could be wrong, but like, we have years and years of hockey players being aggressively dull in interviews at this point

It’s not ideal but the deal is otherwise so lopsided in favour of Toronto I think you have to swing for it and hope you can hang around a wild card spot. Although again, it makes zero sense whatsoever for Buffalo, so we’ll never find out.

If Kevyn Adams does that they’re going to have to find some extra-special version of fired for him. Like it won’t be enough to just dismiss him from his job, they probably have to exile him to the desert.

His last year was actually better statistically! It was still a shade below average, but that’s a nice improvement from before, when HockeyViz seemed to think he was almost the worst offensive defenceman in the history of the world.

For the record, the time I wanted him was spring 2019. I figured he was an up-and-comer and he was blocked in Nashville by (at the time) Josi, Ekholm, Ellis, and Subban. At this point the Preds now barely have a right side of their defence at all, so I guess we’re gonna see how far he’s come.

Well, I wanted to trade for Dante Fabbro a couple of years back for that…

i’ve never made any claim to that effect

Well, I won’t get into the minutiae of it, but in justice to Scott here is the quote from the linked piece, referencing flaws in Liljegren’s game:

"The big one is mainly his sloppy and slow forwards and backwards skating stride (his lateral footwork and edges are assets, though his pivots can look a little stilted)."

Not many UFAs getting term at this point in the offseason, I reckon.

I should note that while I wrote the article, I didn’t participate in the ranking this year (and I would have put Dermott ahead of Liljegren), so that’s probably part of the reason for the discrepancy.

Seems plausible at this point

There have been occasional references in Mirtle’s stuff to him feeling frustrated with lack of NHL time, which doesn’t seem like it’s gonna get better soon.

Yeah the pessimism that probably runs through this piece, aside from just my general personality, is because it’s really easy to see us going through this again in a year except this time he’s not waiver-exempt.