Conor McGregor is here, for some reason.

Honestly, I think it was around the week of the Texas series

The Oakland loss was still way too early for me. Then we got beat by Texas, at home, and then the White Sox rolled up and kicked the crap out of us. We had a buffer series and then they beat us 16-4. I think that was about when I realized we had gotten too deep into the hole too soon.

I never saw him play

But from what I understand, Dante Bichette was so horrifically poor of a defender that he canceled out much of his offensive contributions. B-Ref says that in 1999, he had an OPS of .827 and a WAR of negative 2.3.

My only surviving Twins button 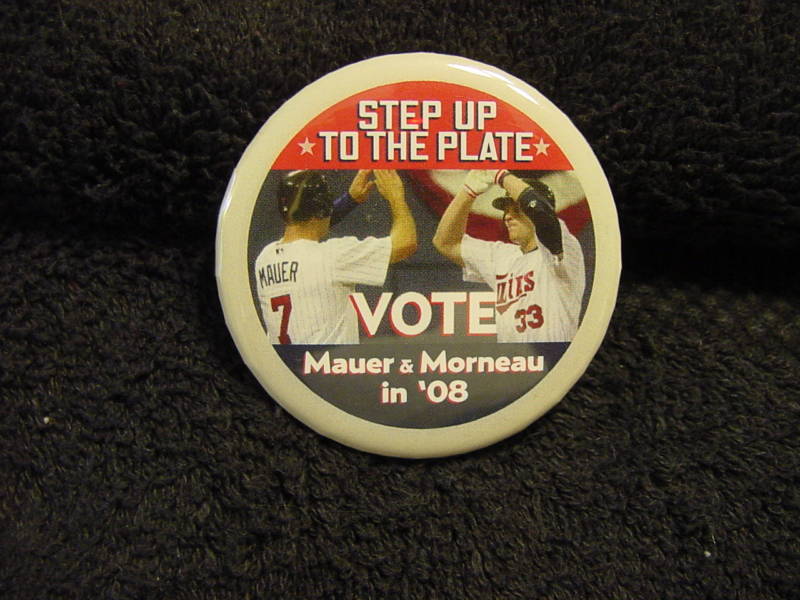 A three-time Triple Crown winner during an 18-year Negro Leagues career, who had a career batting average of .364 in nearly 1,000 games. He helped get more black players in the league once MLB integrated, and was inducted to Cooperstown in 1976.

Was all this just a stealth advertising campaign for Metroid: Dread?

The first main-series 2D entry into the franchise in nearly 20 years, coming this fall to Nintendo Switch? Probably not, but I figured it was worth mentioning anyway. Metroid is cool.

I now believe it is A.J. Pierzynski

Who is this FS1 broadcast team?

I am sure I’ll find out if I wait long enough.

I guess the point of that, in relation to your comment

Is that I think there are still people out there who think like that and will continue to show up. This still the top result when you search "Twins blog," or at least it is for me. Every year I think we get a couple of new regulars who fit in quite nicely and are probably just as grateful for the space as we are to have them in it.)

Give me these conversations here ANY day of the week

Twinkie Town is pretty much the closest thing I have to an active social media account. A lot of my last year-and-a-half involved realizing how much technology I had opted into just for the sake of it, as opposed to using what I actually get something out of for myself. As a result I have an eye on building back a bit more analog in the future.

I know Twinkie Town isn’t analog, necessarily, but it is so much closer to an old-school forum than Twitter (which does, I think, still have some benefits as far as real-time information intake. As long as you’re only getting the Do-Hyoung Parks of the world and not the joemama88s.)

It’s so much more rewarding to log in here every day and have a conversation with other people that actually feel like real-life human beings, and even if there’s only 20-something comments at the end of a lost season, it’s still worth it to see what those people have to say!

They overlay advertisements on the batter's eye now

A big TI logo is one of the main ones.

Let me see if I can remember everything

Three different kinds of empanadas
A barbecue pastry
A breakfast scramble pastry
A bubble waffle with chocolate ice cream and almonds
A nice sparkling lemonade
A drink in a pineapple
Two slices of to-go deep dish pizza and a Cubano sandwich, and some fudge

I think there was more…will add it if I remember anything.

All of it was plant-based and flippin’ delicious — it’s at a touring vegan food festival that makes the rounds across the country every year around this time (except for last year.) My best friend is vegan and this is the first time I’ve had time to come with her. They have pretty much everything you can think of and I think over 100 vendors — lots of local stuff but also plenty of stuff you wouldn’t normally be able to get fresh here.

Tawny Jarvi's comment on Cleveland 4, Twins 1: Who even cares???? from Twinkie Town,

Tawny Jarvi's comment on Cleveland 4, Twins 1: Who even cares???? from Twinkie Town,

M.Grasso's comment on Cleveland 4, Twins 1: Who even cares???? from Twinkie Town,

Even when I'm not available I love seeing a bumpin' gamethread