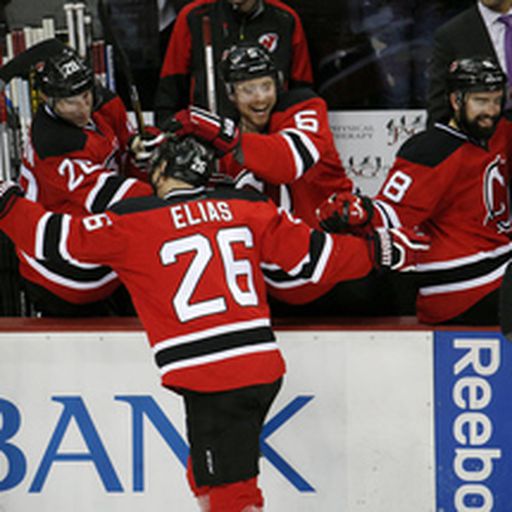 I happen to like both writing and sports, so here I am.

It worked well here, but we might have had problems if we were all trying to embed stuff in our comments.

I agree that Bahl should not be on the team this year. It’s not even necessarily that he can’t do it, but I would rather him play 25 minutes a game in Utica.

It’s also hard to believe that Nolan Foote is only 20 years old, but I think he has a solid chance to make this roster. He had 17 points in 24 Binghamton games last season, and unless they’re worried about his defense, his stature and skillset make him a perfect bottom sixer on this team.

As for Mercer, my eyes are on him. I would slot him in at 3RW right now – and I think he’s likely better than Jankowski/Vesey.

And if the Wood-McLeod line stays together, I would love to see Zetterlund fill Bastian’s spot.

commented on Which New Jersey Devils Rookies Have the Best Shot At Winning A Roster Spot With A Strong Training Camp? from All About The Jersey, Sep 15, 2021, 11:09am EDT

Internal alternative to a signing, aside from Zacha

If I’m not mistaken, Janne Kuokkanen is capable of playing center, but has never been given a chance in the NHL to do so. If Tatar takes his spot on the Hughes line, it might not be a bad idea to try him at center in the preseason. That way, Zacha and Boqvist stay on the wing, and McLeod doesn’t have to be more than fourth liner.

commented on Tyler Bozak is an Insurance Policy the Devils Should Consider from All About The Jersey, Sep 12, 2021, 7:39pm EDT

Ironically, it’s the offensive metrics (GF/60, xGF/60, and CF/60) that Bozak does considerably worse than Zajac.

commented on Tyler Bozak is an Insurance Policy the Devils Should Consider from All About The Jersey, Sep 11, 2021, 9:06pm EDT

acasser's comment on Tyler Bozak is an Insurance Policy the Devils Should Consider from All About The Jersey,

He’s had a couple decent KHL seasons, at least.

PoisonTheWell's comment on The 2021 AATJ Top 25 Devils Under 25: The Third 5 Revealed from 15th to 11th from All About The Jersey,

cmcd3030's comment on After Fitzgerald’s 2021 Moves, the Clock is Ticking from All About The Jersey,

I'm for Bozak as a fourth line or 13th forward

But I think he’s a downgrade from Travis Zajac…which is something considering Zajac’s age.

commented on Tyler Bozak is an Insurance Policy the Devils Should Consider from All About The Jersey, Sep 10, 2021, 4:56pm EDT

Elboku sometimes overshoots the pessimism, but its often been warranted and it has a "light at the end of the tunnel" so to speak. So I don’t mind it.

cmcd3030's comment on After Fitzgerald’s 2021 Moves, the Clock is Ticking from All About The Jersey,

However pessimistic you think I feel about this team, divide that pessimism at least by half, maybe more.

Well, I wasn’t writing about the team when those picks were made lol

I think Yegor is scoring 30 this year

I didn’t want to address future cap space in the article, but you hit the nail on the head. I’m particularly afraid of what Wood’s contract will look like, but I’m also not wanting to lose him via trade.

acasser's comment on After Fitzgerald’s 2021 Moves, the Clock is Ticking from All About The Jersey,

He was smiling when he said it, he meant no offense to what remained of the Devils roster

Jared W Moore's comment on After Fitzgerald’s 2021 Moves, the Clock is Ticking from All About The Jersey,

It’s probably deeper than "don’t trade Hall," though. Shero did not even begin putting numbers on the table for Hall, and I thought that was a sort-of dereliction of duty. But all of these things (not listening to others) could be connected too. This article from ESPN did a pretty good job of highlighting ownership differences with Shero. And then there was this from NJ.com:

Another person with knowledge of the call to fire Shero said Harris and co-managing partner David Blitzer arrived at the decision 10 days before making the announcement. After toying with the idea of Shero riding out the season before making the change, Harris and company fired Shero on Sunday, impatient to make the Devils a winning hockey team again.

Mike Stromberg's comment on After Fitzgerald’s 2021 Moves, the Clock is Ticking from All About The Jersey,

No, but we can guess. They fired Shero during the disastrous 2018-19, which I thought indicated they disagreed with his decision to move on from Hall and tank.

Well, we might still have an AHL writer if the Devils didn’t end their Binghamton agreement early.

commented on Site News: Welcome Jared & Stephen to All About the Jersey from All About The Jersey, Sep 8, 2021, 1:11pm EDT

Not necessarily. The arc of a rebuild can have dips and rises before truly coming out to competitiveness, but it’s on ownership to let the hand stay steady if the moves being made are (mostly) logical.

What you expect and what ownership expects might be two different things. I’m not saying he’ll get canned if the team is in the middle of the pack but ultimately misses the playoffs (which would show a lot of growth), but I would not be surprised at a firing if the team ended at the bottom of the barrel again. Regarding that, I think number 4 in your list is most important to number 7.

Right – Fitz had a longer-term organizational contract, but only one year for the GM job.

After Fitzgerald’s 2021 Moves, the Clock is Ticking