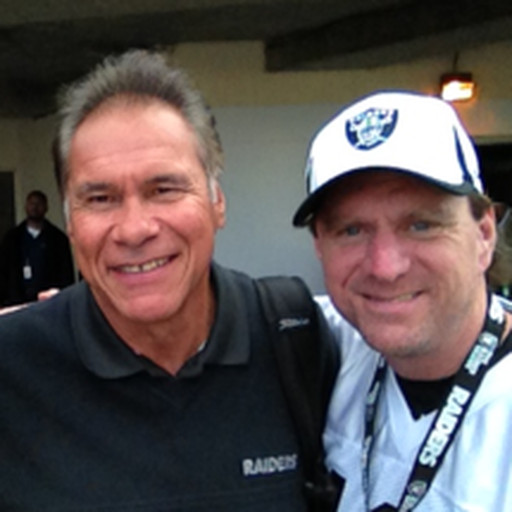 Oakland Raider fans since the 70's, and long time "red zone" season ticket holder: 20 yard-line, first couple of seats in Row 10. (couple more in Row 11, couple more in Row 7) I go to most home games and for me, it's sit close or sit comfortable (e.g., at home) I've seen a lot of football up close and coached teenage WRs and DBs alongside of former NFL players, among other things. I enjoy looking for technical things like mechanics and don't always agree with what the average fan thinks. I have competed, coached and officiated on very high levels for a long time and am an expert in some aspects of athletics. I was a track star in high school (14.3h in 110m HH) and have worked with, in some capacity, athletes of all levels. I developed a couple of national level athletes on the youth level in the last few years (top 10 in the U.S.), something I enjoy tremendously. When I was just a kid living in LA, the Rams were the hometown team and I'm still a fan of theirs, but haven't made it to St L for a game yet. They almost never play the Raiders so I feel like I have a team in the AFC and a team in the NFC. I wrote a few articles for Turf Show Times a couple years ago. Some of our lesser intelligent online acquaintances seem to have a problem with me liking both the Raiders and the Rams. Look, if you're gonna hate because I like NFL 2 teams that were both actually my hometown teams as a kid, consider yourself invited to fvck right off. "It aint nuthin but a party when we thug" ~ Tupac, in a cover of Tha Dogg Pound song Can't C Me