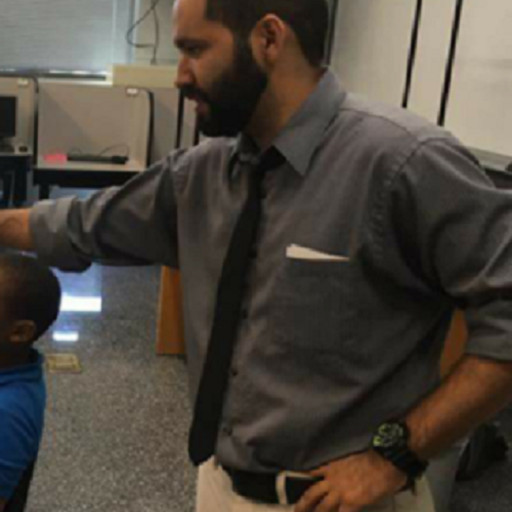 But the difference is he’s now controlling the forecheck. Hitchcock and Montgomery, for all of their faults, had Dallas playing aggressive without the puck. Bowness’ forecheck is a lot more conservative. I suspect a more aggressive attack without the puck aided Klingberg’s defensive results. 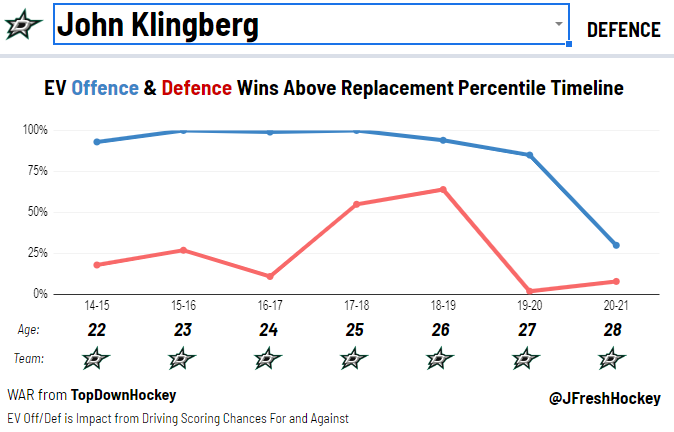 He’s always struggled a little defensively, but he hit his defensive stride under Montgomery, and then just crashed and burned under Bowness.

Such a great piece by Han

illustrating how neutering offense and neutering production are not mutually inclusive.

Haha, have a rec

I’m no "stats" guy though. I think it’s essential to any serious analysis, but how you marry the qualitative with the quantitative always increases the more wicked the talent (like Thomas Harley), or decreases the more "kind" (i.e Blake Comeau) the talent. Kotkaniemi is terrible from a quantitative perspective. Through a qualitative lens, I think there’s a ton there.

is that they can’t find scoring outside of McDavid. If they treated offense like it was everything, they’d probably have a better team.

This isn’t the strongest argument, granted, but just look at the head to head matchups in the last several OHL championships:

Because the strongest players don’t always produce – and because goaltenders can take away all the fun – I think it gives viewers the appearance that hockey isn’t a strong link game at other levels, but I think it’s largely present whereever you look.

forwards don’t have their idiosyncrasies laid bare because as long as they produce, they don’t ask how, they ask how many. Defenders will never be as tied to their production as forwards, so their habits are more pronounced. Dallas’ inadequacy to develop players is not so much a specific function of their choices so much as a broad problem of hockey culture. NHL coaches aren’t paid to "babysit" which is why they always brag about players who are ‘coachable.’ I get why (winning versys development), but I’d argue it’s a false dilemma. Teams look at their rosters, and think leveraging the best strategy is what wins games, when I’d argue leveraging your best players is what does it. Alex Novet even had a great piece on this concept of hockey being a strong link game versus weak link game. Assuming he’s right (and I think he is), then you need players like Harley playing toward their ceiling rather than their floor.

See my reply to Taylor

I think Graham’s got chops as a future coach.

I wanted to talk about that

But 3000 words is plenty. Graham sold me on the move to put Harley next to Gleason alone. It would have been easy to go "Cecconi, shutdown guy, with not shutdown guy" and just opt for symmetry over chemistry. Instead he went with the latter. They’re not a pair that jumps out at you stylistically, but a lot of elements of their game synced well despite both being "offensive" and Graham recognized that two players being outstanding in transition was better than one outstanding transition player next to a merely sufficient one.

Unfortunately I’m here in San Antonio, so I technically have access but yea. The editor is super cool, and willing to let me write anything. I’ll still do some DBD writing. The kind of stuff I probably won’t be able to get into (we’re just getting off the ground) are things I’ll cover here, like Film Room stuff: Dallas’ forecheck in the offensive zone versus the neutral (haven’t gone back to watch the tape but I’m almost positive Dallas doesn’t have two forechecks like the Trotz’ Isles do in the offensive/neutral zones), zone exits, zone entries, etc.

Comparisons are exactly why teams screw up development

"Well if Prospect A could do it, why not Prospect B?"

Remember how even Stars fans seemed to dismiss or lose hope in Gury because Robertson was doing what Gurianov "should have been capable of"? We could go round and round with comparisons. For example, KK seemed to ‘disappear’ with lesser linemmates kind of like Robertson when Dallas paired him with donks like Tanner Kero and Justin Dowling. But this doesn’t put any of their respective skills in context.

I personally believe in KK. I was a big fan of him of during the draft when he had yet to climb, and was projected to go where Dallas was drafting. When I watch him, I see the same player that excited me during that draft year. He has a ton of raw tools to work with (very different tools than Robertson or Gury), and for a bonus, has a real drive under pressure. But I also believe in hockey teams routinely screwing up the development of their prospects. Montreal is one of the worst offenders. Look at the Galchenyuk situation, Subban’s treatment by Therrien, Mete, or how quickly they simply gave up Sergachev just to "compete" and find missing pieces for their top six. Teams do this all the time, in multiple sports (see Portland’s treatment of Jermaine O’Neal in basketball). This isn’t about who’s better than who. It’s about Kotkaniemi not being developed in Montreal. He will be in Carolina. What results that yields is anyone’s guess, but smart money is on Kotkaniemi being better. Even if "better" doesn’t mean superstar, ‘better’ should always be the goal when it comes to prospects. Nothing more, nothing less.

KK has a funny game is all

He reminds of players like Reinhardt, or Lindholm – players with talents that aren’t super obvious. So much so that I think it takes a lot of effort from the org to figure out whether they need to play next to shooters, or distributors. Or going deeper, whether or not they need to play next to forecheckers, or rushers, etc. Carolina has just the right mix of all that. I think their preliminary depth chart is Svechnikov-Aho-Teuvo, and Kotkaniemi-Trocheck-Necas. I could see him replacing Svech, or forming his own line (Svechnikov-Kotkaniemi-Necas), and just go absolute nuts.

So they made the smart play

Plenty of non Dallas fans would probably look at Gurianov and say he "disappears a lot" but does anyone think Gury isn’t capable of better? Would we also not find plenty of reasons to partially explain why he disappears rather than put the burden all on him (i.e. consistency or lackthereof of linemates, COVID seasons, etc)? I think KK’s gonna be fine. His below average skating is no different than Robertson’s, and he’s still younger than either Gury or Robertson. NHL teams routinely screw up a player’s development. Kotka is just another in a long line.

Kotkaniemi is gonna be good

In fact, I’ll even make the hot take that he’ll top out better than Tkachuk. Yes, his stats are bad, and he hasn’t found his footing in Montreal. But Montreal kept trying to stick him with north/south wingers, and never had the blueline to further assist him. In terms of raw skill, there’s a ton to work with. He’s got great puck control, he tracks well, can shoot, pass, and being an average skater is the least necessary skill as a center. On a team that emphasizes possession, a more nuanced forecheck, and can play laterally, Carolina’s gonna next level his game in a big way. Carolina has a solid scouting program, so I have no doubt Carolina is purely working with what’s not there, and has yet to be unlocked in KK’s game versus what is there, and the struggles he has shown.