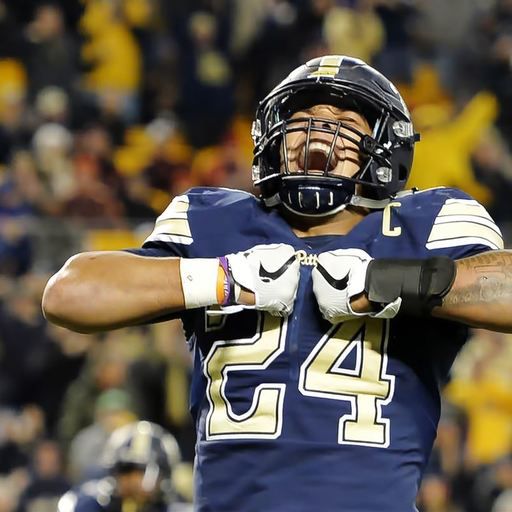 Thanks for the comment! You’re absolutely correct. Sadly so, but correct. I guess the best we can do it call it out at Heinz, and be as hospitable as possible, so we’re not hypocrites writing holier-than-thou articles that deepen artificial divisions between us and our southern neighbors? At least, that’s what I’m hoping.

And thanks, I’m glad you liked the tone. Looks like 7 years of being a student at Pitt did me some good. Shoutout to Prof. Jack Gareis, the guy who taught me how to write.

PantherInPhilly's comment on Will any Volunteers stand up? from Cardiac Hill,

First quarter’s gonna suck again because Whipple’s conservative start will hamstring the offense and put too much pressure on the defense. I’d say one ugly WM touchdown early in the game, likely from a missed coverage on a short field after a 3 and out. This will be, no doubt, in part due to whatever gimmick or trick WM likely has in store for us after a week of their mid-low tier coaches sitting in a film room and mining the Tennessee tape like it has the map from National Treasure hidden somewhere in the frames. After it drops to 0-7, it won’t automatically get better, because this is Mark Whipple were talking about, and he’s the type of guy who needs his hand to break before he discovers that punching a brick wall will not put a hole in it. It’ll be a lot of VD runs up the 2 hole, VD passes in the flats, a blown up Shocky J-L jet sweep, and a 40 yard field goal that makes it a lackluster 3-7 going into the second. Penn State twitter will ignite, despite the fact that they do not think or care about us at all.

Finally, only after every Pitt fan has cashed out on the spread to salvage what money they can, the Pitt offense will come alive. KP will throw for 200 yards in the second, and another 100 in the third. This will open up the run game as the WM gets tired, and Izzy A and VD will share carries because why spend time developing one running back, when you can give half the time to a guy who is a completely known quantity? At the end of the third, it’ll be a towering 37-7 Pitt lead.

In the fourth, the play-calling will, understandably, go back to super conservative, and the Pitt offense will 3 and out often due to an ineffective run game lead by back-ups. Nick Patti will make a completion that makes us all wonder where Davis Beville is and how he’s feeling this fine day. Pitt will lay an egg in the fourth, and WM will score a garbage-time field goal. Final score, 37-10.

Will any Volunteers stand up?

Absolutely true. In part because Tennessee needed that game to have a semi-respectable season this year. They were playing their hearts out, and the fans placed a lot of significance on this game too.

What H2P_1787 said is (sadly) entirely correct, however, so I was very pleased to deprive the Tennessee fans of having anything to celebrate.

I was there yesterday

One thing you don’t realize watching on TV is just how much the atmosphere can destroy even the best laid game plans. On Pitt’s first drive, you couldn’t hear the person next to you. After the blocked punt, the crowd was absolutely deafening. Also, it was HOT. It wasn’t that muggy heat you get in Pittsburgh. It was that fry an egg on the bleacher seat next to you kind of heat. The kind of sun that drains all your energy simply by standing in it – and at high noon in Knoxville there’s virtually no shade. To make matters worse, playing at Rocky Top is like playing at the bottom of a bucket. It’s not like Heinz which invites in a nice breeze from the rivers. The stands go as vertical as possible starting at the lower bowl and wrap around the field completely. Besides reflecting sound everywhere (talk to Baker Mayfield about that effect) it also means there is literally no reprieve from the sun. If you ask me, all this gave Tennessee the equivalent of a 12th man out on the field.

Tennessee turned out to be a pretty bad team, but I won’t blame Narduzzi for not having everyone up and playing to their full potential – at least not this time. He brought home the W, which is the best you can hope for when battling 80,000 angry southerners and nature itself.

jrwolf08's comment on Pitt trounces UMass in 51-7 in 2021 season opener from Cardiac Hill,

Literally every team messes up at some point during a game, especially during the first game of the season. As Pitt fans, we’ve conditioned ourselves to assume this is unique to Pitt football.

It bodes well that the first TD of the season was scored by a tight end. Hopefully a sign of things to come

RandolphMarsh1's comment on Pitt trounces UMass in 51-7 in 2021 season opener from Cardiac Hill,

Thank you for everything

A personal note – through many years of school and work, this site has always been something I go to in order to get a nice reprieve from the daily grind. Circa 2013 you would’ve caught a 19 year old me with this site up on my laptop in the back of some gen-ed class in Posvar. Now I pull it up on my phone on my work breaks.

Also, this site literally got me a job once. I was reading this a few years back on the bus headed to an internship interview and happened to read an article about Pitt basketball (I think it was the Capel hire?). Well, sure enough, the guy who was interviewing me was a HUGE Pitt basketball fan and we spent the entire time talking about it. I got a call a few days later.

Anyhow, thanks for everything, Anson. Good luck.

Admittedly, never thought about this until now

AJ Davis literally looks like he runs in slow motion. I’m not usually one for bringing down the players, but here I have to make an exception. We all know EXACTLY what he brings to the table. If I’m Izzy or Daniel Carter, I’m beginning to wonder who Narduzzi WON’T put in front of me on the depth chart, and where else I might find some good playing time.

We have an AD worth the stress

I don’t remember the specifics, but it had something to do with Narduzzi disciplining him for roughhousing in the dorms. Apparently Ford threw a remote or controller at someone? I just brought it up as an early example of his immaturity from the get-go. https://www.post-gazette.com/sports/Pitt/2017/10/26/pitt-football-fight-paris-ford-tyler-sear/stories/201710260129

He legitimately could have been a star, and still could be, since he’s abundant in talent and missing very coachable aspects of his game. But, who in the NFL has the time or patience to risk the investment?

I can’t help but feel bad for him. He made his own bed and all, but still. Sometimes someone’s inability to grow up right at the arbitrary age of 18-21 isn’t their fault. I remember the Xbox controller story way back when he was a freshman…too bad he couldn’t grow out of it.

I wonder whether Narduzzi was getting through to him a little bit, but the string of bad losses and the stress of the Covid season caused him to regress?

If the ACC is famous for one thing as a collective group, it’s being a quarterback factory.