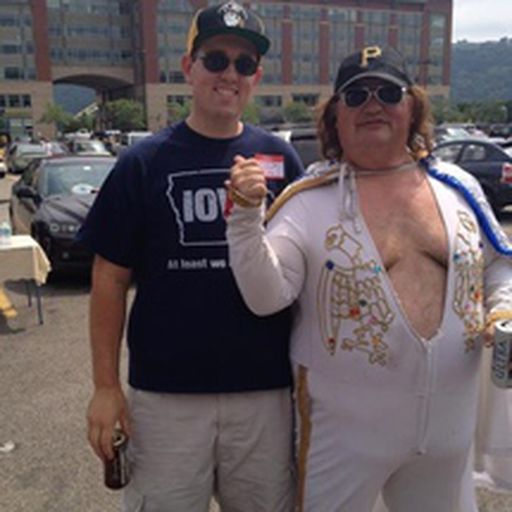 Sports fan from Iowa. To me every Pirates game is a huge must win game until they are eliminated from the playoffs. Even spring training games. Started following the Pirates in 1988. Waiting since 1992 for them to win anything that matters. Also a Pittsburgh Steelers, Pittsburgh Penguins, Chicago Bulls and Iowa Hawkeyes fan. Yeah. I pretty much only wear black and gold.

Or it was the Mets effect.

As soon as he was a Met, boom, career over.

Maybe since I pay more attention to the team than most fans..

But I still think of Jason Bay’s good seasons 2004-08 and Freddy Sanchez winning the 2006 batting title and Nate McLouth’s 2008 breakout season. Brian Reynolds had a season comparable to those guys and if he keeps playing like this, it won’t be something I’ll forget about soon.

Bruce Kison was also on the 71 squad.

After having been burned by the Archer trade the year before, the general mood around BD was that the Pirates shouldn’t rush in to trading for upgrades, the two weeks following the ASG break would show if the Pirates should attempt an upgrade to make a run for the playoffs or trade pieces away for prospects. If you were to ask me on July 10, 2019 what the Pirates should do at the deadline, I would have said "trade veterans for prospects and start a real rebuild, any attempt to upgrade would lead to more good young prospects like O’Neil Cruz getting traded away" and I would guess most on this blog at the time would have agreed.

The Pirates came back from the break and got their asses handed to them, winning only 3 of the 18 games between the ASG break and the July 31st deadline. By then the Pirates were left in the dust by the good teams in the division and it was obviously time to start a rebuild. Of course, Huntington traded away Jordan Lyles and Corey Dickerson for almost nothing. His attempt to get anything for Felipe Vazquez and keeping him majorly backfired. The Pirates went 4-24 during that time leading to a 48-69 record when they went to LA and finally won a series against the Angels in mid-August.

You can blame Nutting "turning his back" on the team in 2019 if you want, but that team was the result of years of bad drafting, bad trades, bad free agent signings and bad player development from the Huntington years. His giving out four year extensions to Huntington and Hurdle after 2017 was his biggest failure. It ignored all the problems that were clear to people paying attention to the organization and it ignored two bad seasons after they went 98-64 just two years earlier. During the 2019 season there seemed to always be articles where Cole, Baz and Glasnow talked about how much better the coaching was with their new teams.

Is Cherington the answer? I’m not sure, but I’m willing to give him time to fix this massive mess.

Thunder's comment on Ben Cherington then and now from Bucs Dugout,

JoeyMooney's comment on Ben Cherington then and now from Bucs Dugout,

JoeyMooney's comment on Ben Cherington then and now from Bucs Dugout,

When I was playing HS ball…

I’d lift my bat up and say "This is my boom stick!"

Who the hell is Bruce Benedict?

I thought the pitching guy was Jim Benedict and he went to the Marlins, not the Braves. Also the Pirates won 79 games in 2012. I didn’t even have to look this stuff up, but I checked to make sure I was right.

At least get the facts right before you write something that long. I really couldn’t take it too seriously when you make that many obvious mistakes.

cubreporter51's comment on Ben Cherington then and now from Bucs Dugout,

The P-G is boring and predictable as hell?

Predictable editorial from the P-G.

Never change, Pittsburgh Post-Gazette. Remember when the Penguins owners supposedly made an offer to buy the Pirates almost (holy crap) 12 years ago? The Post-Gazette wrote an open letter to Bob Nutting telling him he should sell the team to them because they were clearly better owners than the Pirates owners. Charlie at the time basically called BS on that and WTM made some good points in the comment section. Same crap, different decade. The more things change, the more things stay the same.

pbroberts's comment on IAPF’s lazy half assed 2021 review and playoff preview or whatever. from Bucs Dugout,

1 out of 4 LCS teams predicted correctly. You’d think by chance I’d get 2…

JerseyBucco's comment on The intangibles of Derek Shelton from Bucs Dugout,

zogger52's comment on The intangibles of Derek Shelton from Bucs Dugout,

zogger52's comment on The intangibles of Derek Shelton from Bucs Dugout,

Just a complete lack of self awareness there. I refuse to hear what PSU fans have to say about other fans when most of them sat quietly and said nothing while brain dead college students rioted after Paterno’s firing.

IAPF’s lazy half assed 2021 review and playoff preview or whatever.

Honestly I really hate Penn State since the Sandusky stuff came out.

Iowa football is sure making up for the lousy Steelers and Pirates this year.

They fired him less than a full season later and their reason sounded similar to the Pirates:

"Basically due to philosophical differences, we felt like it was important to make a change for our Rome club at this time," Braves player development director Kurt Kemp said

Yeah, Walbeck might have been a good manager at the Major League level, but it seems like minor league managers who defy their front office don’t last long, regardless of which organization it is.