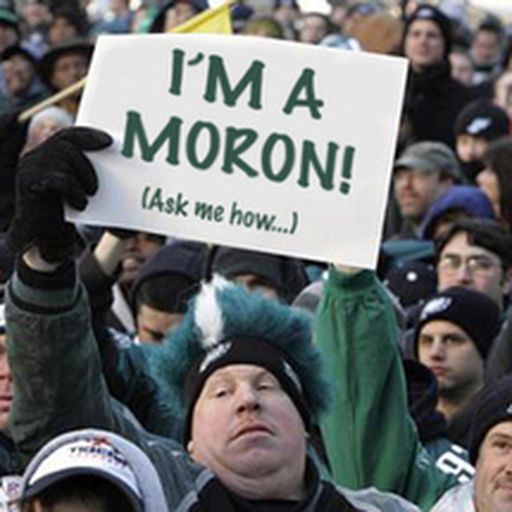 My dad took me to my first game at The Vet on October 10, 1993, against the Chicago Bears. I remember seeing Bears wide receiver Wendell Davis running a seam route across midfield. He jumped for a ball thrown just out of reach but his legs below the knee never left the turf. The rest of his body did. Sitting in the stands, I didn’t really know what happened, not until a week later did I read about how he blew out both his knees. But it was then that I realized there is a certain toughness, a certain mystique surrounding the Eagles and its fans. And I love every bit of it. I have here that my name is James, but that’s only because I went to Catholic school for fourteen years and was taught to always write my full name. My friends and family call me Jim, JJ, or Keane, so feel free to do the same. I also have a super-secret nickname (guess what it is!). I was born and raised in the Northeast, Parkwood by way of Olney, Academy Road by way of Rising Sun. I’m lucky to have a wife who I don’t deserve and an eleven-month old son who wears Cowboy diapers, just so he can piss and poop on them (kidding, but business idea!). I’ve always wanted to write but never knew what to write about. Only last December did I think, duh, the Eagles, and I started blogging (PhillyInferno.com). I enjoy researching and referencing Eagles history and finding old Bill Lyon and Mark Bowden articles. I also have an interest in math and statistics so I’ll post articles with numbers, correlations and regressions (and cool interactive graphs!). I’m basically prepping for the Nate Silver-ification of American Sport. You can follow Philly’s Inferno on Facebook and Twitter @JeromesFriend