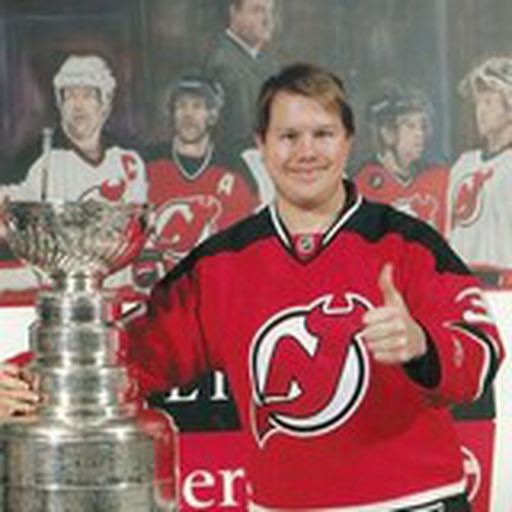 I am a supporter of Jersey's Team: The New Jersey Devils. A fan since 1994 and a season ticket holder since the opening of the Rock, I began In Lou We Trust, now called All About the Jersey, in October 2006 to discuss and express opinions, analysis, perspectives, and reactions to the news and events surrounding the Devils. The writing may be much, but the passion for the team to succeed drives my writing and the blog as a whole.

Travis Zajac Signed for One Day, Announces Retirement as a New Jersey Devil

Eight New Jersey Devils Games to Be Aired on ESPN+ & Hulu; One on TNT

The team should get to it in a timely manner instead of drip-feeding it and leaving some outstanding gaps. Believe it or not, not everyone knew who was on the roster and as it turns out, 7 of the 23 aren’t even NHL players. It would have taken the people in the organization a few minutes to write out a list.

commented on New Jersey Devils Release Their 2021 Prospects Challenge Roster from All About The Jersey, Sep 16, 2021, 1:50pm EDT

That wasn’t a good way to Tweet it out. Fans wanted to know who is at camp, especially since other teams revealed it earlier, there are games later this week (tomorrow), and the team was clearly covering camp so a roster was certainly possible to be released yesterday or a few days prior. It’s not whining and seeing someone representing the team calling them as such isn’t respectful.

And if I’m reading the thread of responses, this you? Am I a whiner for wanting the Devils to actually tell us who is at camp like just about every other team in the NHL?

commented on New Jersey Devils Release Their 2021 Prospects Challenge Roster from All About The Jersey, Sep 16, 2021, 12:49pm EDT

Triumph44's comment on The Waiver Exempt New Jersey Devils Ahead of 2021 Training Camp from All About The Jersey,

The larger community vote collectively went 4 for 5 on the names in this post and nailed the position for just one of them. Since the Top 5 is next week and you all can figure out the names (but not the order, maybe?) of the Top 5 by now, I’m not going to TBD the 6th name among the community.

Kuokkanen edged out Mercer for 10th among the community vote. Kuokkanen’s higher mean and lower standard deviation helped him. (Mercer’s Std. Dev in the poll was 5.73 with a mean of 11.46.) As it did for Holtz over Hughes. The lower standard deviation for Holtz suggests that more of you felt Holtz was around the 9th place range whereas there was a lot more variation for Hughes. The 6.20 is the highest since the 16-20 range of this list. In contrast, Zacha’s low 3.26 means the collective opinion felt his spot was right in line in this area. Sharangovich beat him out, which suggests that more of you think Sharangovich is better than Zacha in this context. This makes some sense as Sharangovich was on a top line last season and is younger than Zacha.

As you can tell from this post, Blackwood made the community top 5. I’ll reveal those results in next week’s post.

I went four for five out of the five names in this post. In terms of exact positions, I only nailed Holtz at 10. I do think Holtz has a real bright future as a top-six scoring threat. But his 2020-21 was not the best. I hope he can bounce back and if he does, it is just a bump in the road for the young winger.

As for the others, I had Kuokkanen, Smith, Hughes, and Zacha at 6 through 9 in that order. Kuokkanen was on a first line with Hughes and Sharangovich and played splendid hockey. I knew I was going to place him high on my list for this year. I gave him spots ahead of Smith and Zacha. While I thought Smith had some strong performances, he had enough quiet nights to make me realize that he is a young defenseman with a lot to learn still. He will get a lot better, but he was not given the big role like Kuokkanen did.

While Zacha was productive enough to make a lot of people think he turned a corner, the on-ice rates and dramatic drop in effectiveness on the PK suggest otherwise. He is very much a NHL player and someone who can contribute. It is still not clear what his best role is, which is a problem as he is 24 and not the 18-year old rookie he entered in the league. I think it’s at wing. But NHL coaches seem to think otherwise. Even with the big jumps in points and flashes of true greatness, I thought Kuokkanen was better than Zacha.

As for Hughes, I struggled where to put him. I only put non-NHLers this high on my list if I think they have a lot of potential to be really great players. I think that of Hughes (Holtz and Mercer too). I settled on 8th because I think should he hit that potential, a potential top end defenseman will be more valuable than a potential scoring winger and Zacha is aging out with this list. But I cannot go too high on the list to put him ahead of established NHLers who are playing significant roles now. I think 8th is a good spot for him and I’m fine with him at 9 on the total list.

Lastly, I wrote this about the goaltending last season. Of course, Blackwood’s numbers looked bad last season; he got a raw deal in my view. He’s still crucial to this team and very talented.

Zacha did have elite numbers in shorthanded situations in the past. You weren’t dreaming it. Unfortunately, Nasreddine changed the PK system (wedge plus one to a passive diamond). Combined with Zacha getting more time on the PK among other PK issues, and it was horrid. Defending in 4-on-5 is a different than 5-on-5, so it is possible to be good at the former but not so good at the latter. Especially if Zacha was playing more wing in 5-on-5 but was a center in 4-on-5 (Zacha led the team with 69 shorthanded faceoffs, just ahead of McLeod so it was a thing).

The role is third line center. Whoever it is isn’t going to be playing with the best wingers or with the best defensive pairing behind them. The matchups, at least at home, should be more favorable. Regardless, they need to perform with who is available. Boqvist hasn’t shown that yet. And giving him games with better players may likely drag those players down than elevate Boqvist, whom would gain nothing from the experience as the role that needs to be filled in wouldn’t be with those better players.

That’s an incredible amount. Is there that much TV money in Helsinki? I don’t get it.

Also incredible: Making the championship round seems to also earn a massive financial windfall. Avangard and CSKA are heads and shoulders above everyone else. I expected SKA to be leading in budget; they are more the best of the rest.

That’s a good point. Studenic’s 2021 was his third one since being signed; and so his exemption ended last season.

Other 25 and under players who are waiver eligible: Jaros, De Leo, Zacha, White, Siegenthaler, Greer, Blackwood, Sharangovich, McLeod, Kuokkanen, Bratt, and Hischier. Given that White, Greer, Jaros and De Leo lost their exemptions prior to last season, they may be likely to pass through waivers again. I don’t think either of those four have been so good that another team will want them on their NHL team.

Per CapFriendly, Holtz signed on April 19, 2021. He was 19 then. Per the NHL CBA and CapFriendly’s waiver calculator, he’s exempt for four seasons.

The Waiver Exempt New Jersey Devils Ahead of 2021 Training Camp

JuniorIRL's comment on What Football Manager Helped Me Better Understand about Hockey Management from All About The Jersey,

I didn’t name the game. Deal with it.

commented on What Football Manager Helped Me Better Understand about Hockey Management from All About The Jersey, Sep 12, 2021, 11:48am EDT

What Football Manager Helped Me Better Understand about Hockey Management

NicoHischierOfficial's comment on Jack Hughes Did Some Tough Work from All About The Jersey,

I believe he is correcting the selective memory that you and some other fans seem to have when an inconvenient fact is presented.

Triumph44's comment on After Fitzgerald’s 2021 Moves, the Clock is Ticking from All About The Jersey,

While I think some are focused on a few details, I actually agree with the larger theme of this post. This is clearly Tom Fitzgerald’s team. And if that team fails, then Fitzgerald has failed. And then ownership will have to replace him. Hopefully by not taking a long time assistant from the group that failed – which is what they did with hiring Fitzgerald. If it seems like I do not trust the current regime, it is because I do not. There’s no reason to believe that any trust was earned regardless of how I feel about trades, signings, draft picks, and so forth. The trust will come with results.

I don’t want him to fail. I want the prospects to succeed, the young players to succeed, and the core to grow into more of a success. It is easy to state that it’s OK if the Devils don’t make the playoff this season. After essentially six years of rebuilding, "wait until next year" is wearing thin as an argument and coping mechanism. (As is "don’t you remember what little was left in 2015;" quick aside: arguing that the Stillman pick is OK as a massive reach really doesn’t align with that line of thinking.)

Of course, since there is a new wave of treating people in authority as unquestionable, I suppose I have to qualify any opinion by stating it is up to the owners as to what the expectations are for next season. I will say I am confident Fitzgerald’s seat will get really hot if the team finishes in the bottom five for a second straight season.

Last week’s Community #16 was To Be Revealed. I can now tell you that was Siegenthaler with a mean of 16.95 and standard deviation of 6.94. He was not particularly close to 15th among the community.

It was a real tight race among the community between Bahl and Boqvist and a close race between Foote and McLeod. Mercer stood on his own, closer to the 10th spot among the surveys than 12th. I think it is fair to say that among the community votes, the high quality U25 players starts with Mercer.

The community did well to go 4 for 5, with Bahl being the odd one out. Some of you really, really love Bahl. So much so that he just about won a coin flip with Boqvist for 14th. With his low standard deviation, Boqvist and Foote were commonly selected for this range. Ditto for McLeod.

Next week: The first half of the top ten.