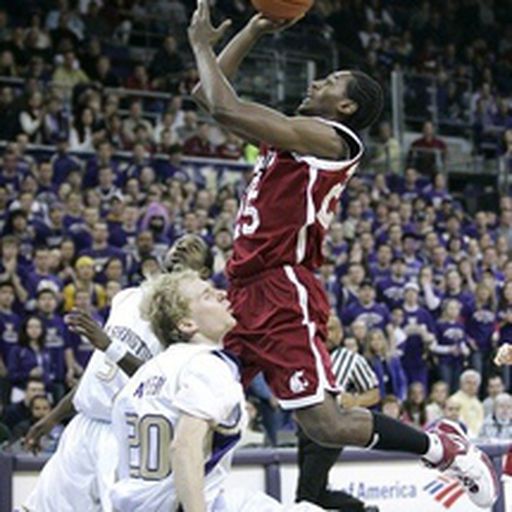 Two in the cake, one in the puddin'! -Kevin Calabro

They are not even remotely close to the same thing in this scenario.

Or the athletic director made a bad choice for the head coach and no one got sold a bill of goods and sometimes this stuff happens.

Glad you’re not being stupidly defiant about being hilariously wrong though.

Bill Moos did not get scammed by Ernie Kent, he made a remarkably bad decision to hire because he doesn't know a damn thing about basketball.

Then he inexplicably extended him twice with his God awful contract to give his friend a golden parachute. That’s on him, not Ernie.

I will say that: one third of the way through the season, never questioned their effort once.

They are clearly busting their ass and trying.

(I was baffled when Chun said that. It's just objectively not true but I get it, you gotta beat the donation drum.)

Sorry about the spam bots, y'all!

Kyle Smith inks extension with WSU, securing him through 2027

commented on Three quarterbacks among the options for WSU vs. Utah from CougCenter, Sep 23, 2021, 10:52pm EDT

It's probably worth having some caution about hiring a guy to run a program who, in nearly two decades, hasn't even been elevated to coordinator.

… but probably not for the reasons they’d hoped for.

If my mom were #veryonline, she'd literally take a flamethrower to anyone who said a bad word about me.

But I bought her that "My favorite child gave me this mug" mug for Christmas last year, so.

If you're in the Big Ten, you're more desirable.

Without getting too into the weeds, Kansas and Vanderbilt from that list.

Maaaaaaaaaaaybe Oregon State. Maybe. Cal if only because you’ve gotta fight tooth and nail with their academic side all the time but even then.

Same here. Hard to find many people you could point to and say "He/she would be a WSU lifer". Wulff was one.

Preeeeeeeetty much. If you know you're headed that way anyway, might as well wait and see if you can save some money.

"do you assume collective fan behavior online and on social media doesn’t affect the perception of a program?"

I think there’s a little nuance here that allows us to say "Nothing we do here directly effects the program" and "fan behavior can effect the perception of the program", though I do think the latter largely follows how things are going on the whole. Its also likely the case that, no matter how well things are going, there will always be terrible fans online.

Fan behavior CAN effect how people view the program, I’d only say that that behavior is generally an outcome rather than a starting point. In this case, it turns it even more negative *because of* Rolo’s behavior off the field and the results on it.

There aren't a lot of P5 jobs that are below us on the desirability scale, frankly.

The key is your last sentence there.

I think we all desperately wanted it to work for Wulff because of who he was but by the end of Year 3, a lot of that patience has disappeared.

October 4th might actually be the day to look at, you must either finish your vaccine sequence or get the J&J by then.

But yes, firing him now compared to two weeks from now would have serious financial consequences for the school assuming that’s the route they choose to go.

Not for that specific job, no. But that jobs not really a "get trained for it in BDCST 465".

commented on Could Nick Rolovich lose his job even with a vaccine exemption? from CougCenter, Sep 17, 2021, 5:21pm EDT

Hendu Manchu's comment on Could Nick Rolovich lose his job even with a vaccine exemption? from CougCenter,

Period. You don’t just move on because someone is being evasive, you press them in an attempt to get them to actually provide useful information.

(Then he should say he has applied for and received a religious exemption but would prefer to not publicly discuss his faith further.)

commented on Could Nick Rolovich lose his job even with a vaccine exemption? from CougCenter, Sep 17, 2021, 11:31am EDT

So when a subject of questioning is being intentionally evasive, drop it?

That is not even remotely how it works.

it actually makes you a journalist trying to get a straight answer out of someone.

I don't necessarily think him being behind is COVID chatter, I think it may genuinely be a recruiting issue.

Sure, WSU never stacks up among the best of the best at this time, but certainly better than "only slightly more than half a dozen commits and dead last in the conference".

It’s good that he hasn’t lost teams! But plenty of coaches don’t before they get fired. Lord knows USC will come out with their hair on fire Saturday over that exact issue.