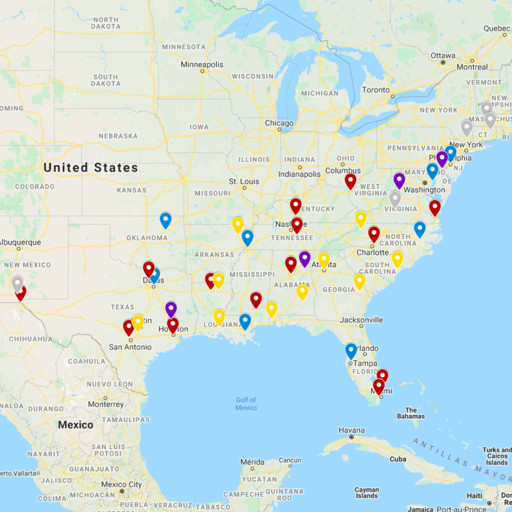 There is no natural home for NDSU

They’d be a geographic outlier in any of the existing FBS conferences, and their travel costs would be very high. They’d only want to move to FBS if the whole Missouri Valley Football Conference was reclassifying together.

commented on James Madison to the FBS? It seems more likely by the day from Underdog Dynasty, Oct 24, 2021, 8:12pm EDT

Exit fees can fund some of this

In the short-term, you can paper over this problem by using some of the ~$27 million war chest C-USA will have from exit fees to fund scholarships/new teams/etc. in the teams moving up. It’s a desperation move, though, and the new programs will have to find a way to stand on their own financially within a couple years.

New Mexico State is almost a certainty at this point

NMSU is the only FBS program that has expressed clear interest in joining. Assuming they are willing to leave the WAC and join as an all-sports member, that gets C-USA to the minimum 6 members and allows it to limp along on "life support" for a couple years. This may be enough time for some FCS teams to get themselves ready for an FBS transition, and they can be added as they are ready.

A lot of the conversation has focused on the football members of the WAC, but I think those programs will be hesitant to leave the solid geographical footprint they are building in the WAC. By contrast, I don’t think any of the members of the Atlantic Sun have any particular affinity for that conference, and will be eager to make the jump up as soon as they are financially ready and have appropriate facilities. The ASun football members are also a solid geographical fit with WKU & MTSU.

If everything goes well, the future would look something like this:

In my opinion, that’s pretty much the best case: You end with C-USA as a regional league focused on the Upland South (+ FIU, but what can you do), and the WAC as a regional league in Texas, the Southern Rockies, and maybe Louisiana. However, it’s also a wildly optimistic case – if they lose any more members over the next couple years, it could kill the conference and force it to dissolve before the FCS candidates are ready to step up.

Being reported by Dennis Dodd, among others: https://www.cbssports.com/college-football/news/conference-usa-future-in-doubt-with-four-teams-expected-to-join-sun-belt-next-week/

Old Dominion is incredibly lucky that Marshall seems to have pulled them along as a condition of joining the Sun Belt. ODU leadership also deserves credit for advocating and publicizing the C-USA+JMU+Liberty plan – it gave ODU and Marshall some negotiating leverage with the Sun Belt to get the full package of 3 teams included.

The 5 teams left behind (WKU, Middle Tennessee, La. Tech, UTEP, and FIU) are in a horrible situation – there is nowhere left for them to escape to. WKU/MTSU fans are talking about moving to the MAC, but it would add a lot of travel for MAC teams, so I think it’s unlikely the MAC actually extends them an invite.

Most likely scenario seems to be that the "rump" C-USA adds whatever FBS Independents are willing to join (New Mexico State and Liberty will be the top candidates), along with a handful of FCS teams that would like to move up to FBS.

The list of possible FCS programs will be constrained by stadium size – the NCAA has a (loosely-enforced) rule that FBS teams need to have average attendance >15,000. Many teams have gotten away with lower average attendance, but you really need a stadium that can seat at least the minimum. Many of the teams that would otherwise be good candidates have stadiums that are way too small, so they would either need to find the money to enlarge their stadiums in the very near future, or find a large off-campus venue to play at least some of their home games at.

C-USA should be able to make a compelling financial case to some of the FCS programs based on the expected exit fee revenue and the C-USA share of the College Football Playoff payout.

Assuming C-USA reloads with FBS Independents and FCS schools and continues to exist, the biggest casualty here will be the WKU and La. Tech basketball programs. They have two of the best teams in C-USA, but a conference full of former FCS programs chosen for football strength will almost inevitably be a terrible basketball conference, and the level of competition will suffer.

Yeah, WAC leadership is talking a big game about moving up to FBS within a decade, but as you mentioned there are a lot of financial roadblocks to getting there, including stadiums, scholarship costs, etc.

NMSU only fills their schedule because they are reliably terrible and are a free win. If they got good enough to be a consistent risk to upset those MW teams, then those games will stop getting scheduled. Playing a moderately good, but not great, out-of-conference team is a no-win scenario for a team with bowl ambitions – if you win you don’t get much credit, if you lose you look terrible. NMSU (and UMass & UConn) can’t afford to get good – the revenue guarantees in their schedule are only possible because they’re willing to be the Washington Generals against any team that wants an FBS win.

Delaware should be happy where they are – the northeastern orientation of CAA football is in line with where Delaware pulls students from, and schools like Rhode Island, New Hampshire, and Maine almost exactly match Delaware’s institutional profile – flagship public schools in smaller northeastern states. They have a solid regional football rivalry with Villanova, and the strength of their athletic programs makes them a consistent competitor in most sports but not an obvious standout. I don’t think they will be interested in moving up.

JMU has trouble moving up. They spend a metric ton of money as a 1-AA and the stage funds their schools more the lower they are. Something that nobody brings up.

It’s not actually funding from the state, it’s funding from mandatory student athletic fees. JMU has a mandatory $2,226/year fee that every full-time student has to pay to support intercollegiate athletics. State law allows athletics programs with FCS football to be funded 70% from fees, while programs in G5 conferences can only fund 55% of their budget from fees. I wrote about this in my recent FanPost.

I personally find JMU’s use of student fees to fund athletics very unfair and think it should be restrained regardless of whether they move to FBS. Adding $8,900 to the cost of a 4-year degree, even for students who have no particular interest in football, is insane – you can get season tickets for the Washington Football Team every year for cheaper than that.

All that being said, I think the only way JMU moves up is if they get an invite to the Sun Belt, along with a promise that ODU will be joining as well (and preferably Liberty too). C-USA is risky and unappealing, and Sun Belt is iffy without having in-state rivalries to maintain fan interest.

New Mexico State seems like more of a liability than an asset at this point – what do they bring to the table other than increasing the number of schools in the conference? With the WAC resuming football, dropping to FCS and playing football in the WAC with the rest of its sports seems like clearly the right move from a competitive perspective. If things go as planned for the WAC, they’ll be back at the FBS level within the decade anyway. However, this would be pretty painful from a revenue perspective – being a punching bag that provides a more-or-less automatic FBS win for other schools is pretty profitable – just ask UConn and UMass.

Liberty is honestly too good for the remaining C-USA – why would they join a conference that looks fairly likely to explode in the near-term? If they get a Sun Belt invite, they’ll probably jump on it, but their current independent status is better than being on the C-USA sinking ship.

Similarly, no existing Sun Belt member would jump to C-USA. Sun Belt has more competitive football and a better TV deal – why would you switch? Movement is going to go in the opposite direction – the Sun Belt is going to have its pick of any of the remaining C-USA members that it’s interested in, and any program that’s invited will almost certainly accept. Current rumor is that they’ll invite Marshall and Southern Miss, but I don’t think that’s a done deal.

There are only a handful of FCS teams that have the facilities that would enable them to hit the 15,000 minimum home football attendance to move up: James Madison, University of Delaware, and Jacksonville State (see my FanPost on this). As with the options above, it’s not clear that joining C-USA would be compelling to any of them. JMU and Delaware saw how moving from the CAA to C-USA worked out for Old Dominion – vastly increased athletic expenses, very limited athletic success, and very little TV money.

It’s turning into a game of musical chairs. All 8 remaining teams would probably prefer to end up in the Sun Belt, but it’s extremely unlikely that the Sun Belt would invite more than 4 total new members, and they might choose not to invite any. If even 2 C-USA teams leave, they end up with a non-viable conference of 6 members, and no other FBS conference that really has capacity and potential interest to take them. The only saving grace is that if the conference stays together long enough to collect the exit fees, then the remaining programs will have a substantial war chest ($18 – $24 million, depending on how many teams leave, and possibly more if they leave earlier than expected).

A couple quick thoughts (I’ll do another FanPost with a deeper dive later this week):

Conference Realignment: Who's In Play?