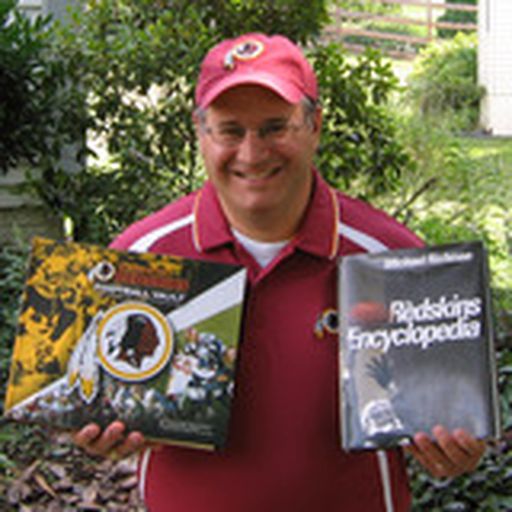 I'm the official Redskins historian. I've authored two books on Redskins history, The Redskins Encyclopedia and the Washington Redskins Football Vault, and I host a Redskins TV show called "Burgundy & Gold Magazine." I've also been interviewed extensively by print and broadcast media on Redskins history, including NFL Films for its documentary, "History of the Washington Redskins," and the Redskins for their 75th anniversary production, "Great Moments in Redskins History." I've appeared on the "NFL Top 10," a program that airs on the NFL Network. My articles on Redskins nostalgia have been published by Sports Illustrated magazine and Redskins team outlets, and I've covered the Redskins for the Associated Press. The Pro Football Researchers Association recognized me with an award for feature writing. My journalism career spans more than two decades, and I've contributed to many other publications such as American Football Monthly, Investor’s Business Daily, The Washington Post and The Baltimore Sun. I co-hosted a sports talk show on ESPN 840 in Charlottesville, VA called the "DC Sports Blitz." I hold Bachelor’s degrees from the University of Maryland and Master’s degrees from American University and Temple University. I work at the Voice of America in Washington, D.C. I grew up in the D.C. area in Montgomery County, MD and began to bleed burgundy and gold when George Allen became coach of the Redskins in 1971 and led the team to five playoff appearances in the 1970s. I live in Potomac, MD with my wife, Cheryl, also a University of Maryland graduate, and my daughter, Brooke.