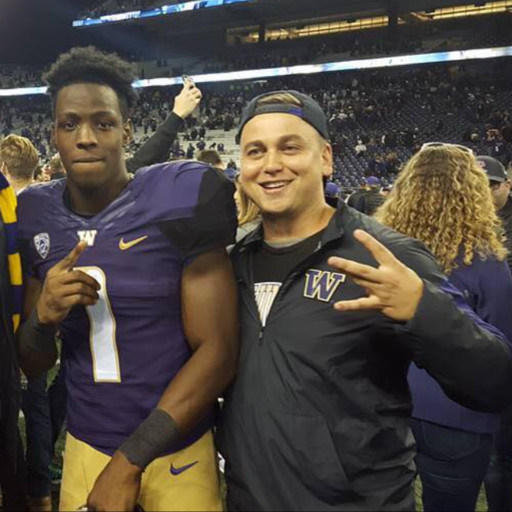 Washington Lets Game Slip Away In 2nd half, loses 81-62

Guard Play much better for sure

Last season was led by the guards too but in a much different way. Last year UW shot a lot more 3’s between Quade, Stevenson, Tsohonis, Bey and also Hameir. This year we take less threes (still need to make them) but attacking more. We hardly got to the free throw line last year.

Biggest difference though is the defense. We were last in the pac 12 in defense and a big part of that was because our smallish guards up top could not put up any resistance. It was too easy to pass over and through the zone and then the Switching man was almost worst, as we gave up close to 80 ppg last year on a regular basis. This year we are giving up 68 ppg, which is much closer to where we need to be to have success.

Also, Mathews is much better overall than Hameir Wright. Mathews will have some tough shooting nights but he does a lot on defense and can score at the hoop. Last night and the Northern Arizona game he shot the ball pretty well from 3 as well.

A lot of credit goes to the coaches and players

Takes a village. The biggest thing the coaching staff did was they designed a game plan to run South Dakota State off the 3 point line and force them inside. SDSU averages 11 three point makes and 26 attempts a game. Last night only made 6 and only shot 17 attempts because they couldn’t get many open looks. And several of those makes were contested shots. That right there is coaching and players implementing the plan. It’s the same plan UW used against Wyoming and George Mason. Barely Lost in OT to Wyoming because of Maldanado and Ike but stifled George Mason for the most part.

We’ll see what game plan we have in store against Nevada who offers a much different challenge with two 7 footers in the lane.

Was that UW was shooting so poorly early on and maybe playing at home for the new guys made everyone a little tight. They have looked much looser on this road trip and playing as a team.

But the shooting was so bad that everyone, even Brown, were shooting way below their averages. At some point the shooting was going to improve and we’d be able to see what the team is capable of. Now just need to bottle that up and do it consistently. I’m afraid we’ll have some ups and downs on offense this year but the defense should travel. Bigger opponents will be a challenge too.

Really wish we had the NIU game back, that was a really bad loss and we’d probably beat them by 20+ now and wouldn’t have let Hankerson get off so many 3’s. We are also a Terrell Brown layup that barely rimmed out against Wyoming at the end of regulation that would have put UW at 5-1. Lots of work to do, but the Dawgs are improving. Some tough games coming up, starting with Nevada tonight.

Both were studs but I see a lot of Andrew Andrews in Terrell Brown. Senior leader that can take over games late as well and gets to the free throw line a lot. Both were lower rated type players that grinded their way to success. Both a little undersized but able to find ways to score over bigger guys. Brown is going to have a successful pro career like Andrews as well.

I do think Hopkins has adapted and has learned some lessons during these past two seasons. He was pretty stubborn with the zone for the first 4 years and now seems to embrace the Man to man defense as a weapon if he has the guys to play it.

On offense, there hasn’t been much change as UW runs a pretty simple 4 out 1 in motion offense. It’s one of the more popular offenses out there that spreads the court to open up lanes for driving and shooting. The Problem UW was having before was not moving the ball around enough and guys not making shots. If you can’t shoot the ball, any offense looks really bad and then guys start forcing drives.

The last two games, UW has spread the ball around much better and guys are knocking shots down. 15 assists against George Mason and 13 assists against SDSU have been much better. Still a lot of room to improve. We missed a lot of open 3’s in the 2nd half that could have added to the assist total.

But in the last 7-10 minutes of both games, it’s been the Terrell Brown show. Basically assuming the Jaylen Nowell role where it does become a lot of iso but he’s so good at getting off a good shot. Teams will start to double him more so UW is going to have to find other guys like PJ, Davis, Bey and Mathews to help carry the load. PJ hit 2 or 3 really big shots late in the game to help stall a SDSU run, he was money.

Win the Northern Arizona and Texas Southern game. UW went to that lineup with Mathews for the last 7-10 minutes of those games.

Definitely hurts the rebounding but the offensive flow and defensive energy is much higher. I don’t propose we do this against every team but for tonight against South Dakota state, we may see it again. Ideally, would like to have Wilson and Grant play that role but they are still developing.

Definitely some truth to it

It’s like a Yelp review. Most people will post something if they have a bad experience but not many folks post a positive review after every time they eat. Some do, but definitely not the majority.

It’s probably the same for most teams message boards I would guess. But it’s more extreme when a certain coach is on the hot seat.

Against Wyoming, George Mason and most likely for SDSU is pretty much the same…. Take away the 3. It seems like UW is almost baiting teams to forego the 3 and take layups. The key is to not give up easy layups but for the most part they are taking their chances giving up 2 points instead of 3 points. It really worked in the 1st half versus George Mason but then they started hitting some 3’s in the 2nd. Granted a few of those were well defended 3’s with a hand in their face so can live with those.

It’s going to happen a lot today so be prepared for back door layups and open mid range shots. The key will be to not over commit and then give up a wide open 3 because the Jack Rabbits will knock it down. Giving up 11 layups versus 11 threes is an 11 point difference and have heard Hopkins give this analogy several times. Run them off the line and shoot 2’s instead of 3’s and will give UW a better shot to win.

Is a really good way to describe Roberts so far. He should be dunking on people I agree. He used to have more bounce when he was a redshirt Freshman. Kind of wish he didn’t add so much muscle/weight. He used to be pretty explosive.

South Dakota State seems like a tough matchup for him unless he can impose his size like he did against Northern Illinois. I’m guessing UW will go small for most of game if Roberts struggles again. Grant and Wilson could see some extra time today or play Mathews at the 5 a lot. SDSU has some guys that can score down low but they seemed to use their quickness to get by the bigger Nevada 7 footers yesterday.

Agree on Wilson and Grant

Those guys need to play more. I don’t think it’s time to give up on Bey or Davis yet. We don’t need to count on them to be all-pac 12 players, just need them to shoot their averages.

Davis is pressing too much and trying to force the action instead of letting the game come to him. He’s kind of the opposite of Bey where he needs to be more selective, where as we need Bey to be a little more aggressive. Besides yesterday with some bad fouls, Davis has been really good on D. Probably one of our best on ball defenders and had at least 2 steals in every game besides yesterday. We need Davis out there and be the Davis he was at Stanford at least.

Not good but not awful

Davis, Mathews, Bajema and Bey combined 7/29 is pretty awful when its 4 of your better shooters.

If that last bucket goes in for Brown in Regulation, his numbers are 10/23 shooting (43%) and UW wins the game. He probably makes that layup 9/10 times but unfortunately rimmed out.

Jason Hamilton and Gary Hill commented in the post game that it didn’t feel like any of Terrell Brown’s shots felt like bad shots and had several just go in and out. Much different than watching Quade, Stevenson and Hameir missing multiple 3’s early in the shot clock last year

Yep, shooting and limiting TO’s will be very important. We have different shooters and ball handlers this year so should be reason for optimism. Here is a look at shooting comparisons between Quade, Stevenson, Hameir and Tsohonis vs. Daejon, Brown, Mathews and Fuller:

Not a huge increase in % but the big difference is the # of attempts, over double. I don’t think we’ll be chucking as many 3’s this year, instead attacking the hoop more. The 3 point attempts will most likely increase this year for Davis, Brown and Mathews but not by a significant amount.

And of course Bey and Bajema will most likely be the best shooters but should be an offense that is able to get better shots this year. Last year we were sort of forced to shoot 3’s because it was very difficult to find good shots and had to come from behind a lot.

At least in the CWU game, UW fed Roberts 4 or 5 times in the post which seemed like a pretty high amount compared to any game last season. Hop mentioned in the post game interview that Roberts was going a little too quick in the first half and then settled down. He also said Roberts played better in the scrimmage (against Boise St.) down in the post so makes me think they are making a conscious effort to give Roberts more opportunities in the post this year, at least to start. Will be up to Roberts to capitalize but something to look for.

Like Max said below, Mathews is definitely way ahead of Wilson at this point but Wilson will make a big impact off the bench. Ariyibi is a guy that might sneak his way in the rotation. Hop keeps talking him up and mentioned Ariyibi "only played 10 minutes because he wasn’t feeling well." Makes me wonder if he was supposed to play more and who’s minutes does he take. Sounds like Ariyibi has picked up the defense really well and has really good size/athleticism. My guess is Sorn will play some minutes if Roberts and Grant/Wilson are in foul trouble and need more size and other games, Ariyibi will play some minutes if we need some energy on the wings or if Mathews/Wilson gets in foul trouble and need to buy a few minutes.