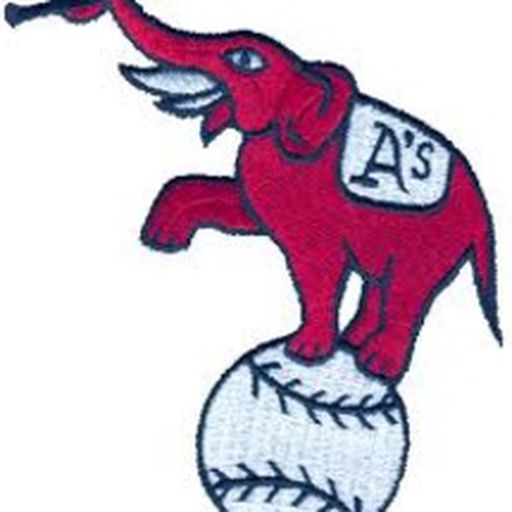 RoyalDUF's comment on Should the Royals go ahead and sign Bobby Witt, Jr. to a long-term deal? from Royals Review,

first to vote. no.

we all want Bobby to be a good or even great player someday but he hasn’t played one inning in the majors. Franco at least has done that.

also, let’s wait until at least after the next bargaining agreement. the structure of years of player control and the whole financial picture could change over the winter.

but after Witt Jr. gets some big league time and assuming he does OK with some expected hiccups (like rookie George Brett’s tendency to throw balls hit to him over the first baseman’s head into the stands) and after we know more about the final labor agreement i think we should at least consider tentative conversations. the team will need a franchise cornerstone after Salvy retires and just maybe Bobby Witt Jr. can be the next if he does not become the next Clint Hurdle.

Today I have two OOTP22 alternative history KC A's games on Twitch for everyone to watch anytime over the next two weeks.

Game one is set in 1964. In my alternative history the league has eliminated all trades since April 1958, properly placed the actual players in the expansion drafts, and has allowed waiver claims only beginning in 1963. By my special rule for the A’s I will only make a waiver claim on a player if he at one time played for KC and I obviously do not always have waiver claim priority. Example: the 1964 A’s bring back Wes Covington since the Braves waived Wes due to an outfield logjam. I also imagined that the 1964 A’s moved to Peculiar, Missouri that year and that the league allowed Finley to use his "KC Pennant Porch." One of the park creators made the Peculiar ballpark which is available free at the Forum/Mods and it is used in this game against the alternative 1964 Orioles. Link at: https://www.twitch.tv/kcstengelsr/video/1219074938

Game two is set in 1956. In this alternative history waivers are allowed from the beginning (April 1955) but no trades are allowed. Additionally and unlike the prior scenario this simulation also has turned off morale, owner goals. and coaching since all three can make unrealistic affects upon team performance. My A’s will make waiver claims and offer minor league deals for free agents to only two categories of players: those who will someday play for the KC team or any and all minority players since I feel that the Johnson A’s had a bad track record there. My A’s signed three former Negro Leagues players as free agents: reliever Satchel Paige (who pitched in AAA in 1956 in the Phillies chain), outfielder Sam Jethroe (who played for unaffiliated AAA Toronto that year), and infielder Marvin Williams (who played in AA in the Cubs chain that season). I think that the KC A’s could have signed some former Negro Leagues stars if they had tried harder and if they were not spending so much of their time working on trades with the Yankees. My 1956 game is set in period Municipal facing the White Sox. The link: https://www.twitch.tv/kcstengelsr/video/1218360014

and some show up for auction from time to time. The problem is that the real ones can set you back a couple of thousand dollars for those with the red elephant on the sleeve (1955-60).
Meantime, maybe Max can buy on ebay a replica of the sleeve patch. He needs to Google search 1960 Kansas City Athletics Patch Cooperstown Collection to see what he can get for $17.95. It looks nice even though it is a well made replica.
So no, I guess no Black Friday shopping for me today.

I am still waiting for a snow day to do my recap Fanpost of my OOTP22 Royals 2021 season with their wild card appearance,

but I can use days like this to do yardwork.

Meanwhile, I finished my sim OOTP22 Kansas City Athletics 1962 season and my A’s did four games better than the real historical team. My sim started in 1958 and all teams could not make trades, all injuries were turned off, and no amateur nor Rule5 Draft was used. My "Athletics" like the other teams had to use internal depth and "Kansas City" in five seasons has won twenty-nine more games than the real deal and fan interest has not dropped as much as the real team faced. The "Yankees" over those five seasons have lost thirty-seven more games than reality as they had no Hector Lopez and Ralph Terry from the Athletics nor did they have Roger Maris of the Indians.
My 1962 Athletics could not get Ed Charles and that would have helped some but Charles did finally make the 1962 "Braves" as second baseman. In real life the Braves did consider having Charles at keystone since Eddie Mathews was set at hot corner.
So, a free game to watch anytime at your leisure on Twitch with my 1962 "A’s" having their final game of the season facing Jim Bunning of the 1962 "Tigers" is at link: https://www.twitch.tv/kcstengelsr/video/1205293277

as I was used to Connery. But as a story, OHMSS grows on me each time I re-watch it. I think it is the best of all Bond films.

basing arbitration on WAR is better than the old system based upon Wins, RBIs, and other old-school stats but

they should permit big pay cuts for underperformers and typically a fellow getting Xbucks in the previous arbitration usually always gets at least Xbucks in his next arbitration even if he had a poor season (wish they could allow more Xbucks-Ybucks for laggards).

I noticed that later this month college pitcher Kumar Rocker will turn 22 years old. I think the MLB proposal of free agency at age 29 1/2 will not fly but I think that it should be set at the year a fellow turns age 28. Teams that want to have six years in the majors of Rocker would have to promote him immediately after signing him in this June’s draft and they actually would only get 5 1/2 seasons of Rocker that way. The Mets probably should have signed Kumar if age 28 season is the final year prior to free agency for all guys.
I would also cut one year off minor league seasons before Rule5 eligibility. A high school kid signed the year he turns 18 would be eligible for Rule5 after the season he turns 21 and would be eligible for free agency as early as after his age 27 season.

Toma, Herzog, and Howser are the three members of the Royals Hall of Fame with Kansas City Athletics connections.

George was working for the KC A’s prior to either Herzog or Howser and I can’t imagine a fourth person ever joining this exclusive trio.

If anyone watches the video, some might not understand why Haywood Sullivan is playing for Washington, not KC.

I used the actual AL expansion draft and Sullivan was drafted by Washington.
All trades were turned off, so KC did not trade Kutyna to the Senators for Haywood.
And the Athletics never had Kutyna anyway. The team never traded for Marty from Cincinnati in the first place.

Spoiler for 1962 simulation. Catching might be interesting. KC has no Sullivan nor do they have Azcue as they will not be making the deal to Milwaukee for Azcue. This also means no Ed Charles. The Athletics in 1962 will also not have Causey as no deal with Baltimore.

it just so happened that I had been using OOTP22 to simulate the 1958 Kansas City Athletics into the future with the "what if" of no trades, waiver claims, amateur draft, and injuries for all teams starting around mid April of 1958. My simulation just finished the 1961 regular season and Bradford noted how that was a special year for Dick Howser. So how did my simulation KC A’s do?
1. The team has a new owner ("Finley"). Charlie wants me to win but he also is realistic about the situation.
2. My manager is legendary Cuban Mike Gonzalez. "Mike" is 71 years old but he did manage the Cardinals a few games in the late 1930s and he seems to know his stuff. I hope Gonzalez does not retire as his clubhouse is in good shape.
3. I set aging and development for the game as normal since 1958 but player ratings are still based upon yearly real stats and they change over time. Some of the "old core" from 1958 are getting a bit old but previous owner "Johnson" did not have many good farmhands ready to plug in. I used the real AL expansion instead of the game method (except I did not use the Cronin trade adjustments after the draft) so the Athletics parted with for example Cerv and Garver and Kansas City will lose for example Hal Smith and Ken Johnson when the NL expands.
4. I acted as GM for purposes of promotion and demotion but "Mike Gonzalez" did his AI stuff for game strategy without my involvement.
5. Since real stats are most important for player ratings I found my 1961 Athletics with a hole at third base since neither Hector Lopez nor Hal Smith were anymore spry enough for the hot corner. You will have to be a historian of the team to recognize what I had to use there—Alex George or Ron Debus or Rac Slider. Some might remember outfielder Bill Kern.
6. Unlike my 1960 "Athletics" the 1961 edition did not finish .500 under these circumstances but they still won eleven more games than the real team that year.
Link to watch OOTP22 simulation Athletics face the Senators in the final game of the season: https://www.youtube.com/watch?v=ohrdtjoYYyo&ab_channel=kcstengelsr
Municipal Stadium and uniforms created by silvam14. I added some custom camera angles and sounds. Note the pinstripes on the 1961 Athletics uniforms which were used by that one year only. I imagine my "Charlie Finley" saying, "With so many ex-Yankees maybe they will play better in pinstripes."

If Singer continues to question off speed stuff.

Might as well take a stab at making a bid.

The fellow plays right field.
Right field: Dayton Moore’s perpetual black hole in the lineup since 2007.
It is difficult to find a franchise which has had a positional hole for seven years in a row, much less twice that long. If Matias can figure out making contact I would not be so sure of making that bid on the international market.

commented on Royals reportedly among the teams interested in Japanese outfielder Seiya Suzuki from Royals Review, Nov 2, 2021, 10:44am EDT